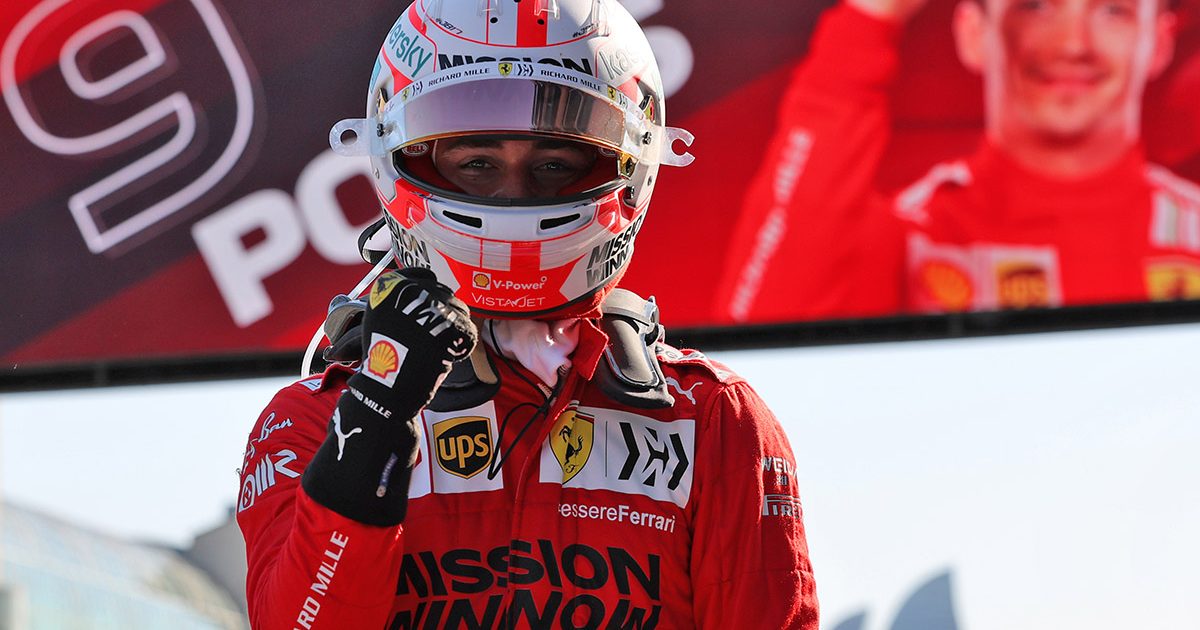 Charles Leclerc has taken pole position for the Azerbaijan Grand Prix after a scintillating qualifying session in Baku on Saturday.

A dramatic Q3 session ended in remarkable fashion after Yuki Tsunoda and Carlos Sainz crashed out at Turn 3, with Lewis Hamilton recovering brilliantly from dismal practice sessions to take P2.

Max Verstappen will line up P3, just 0.002s faster than a fantastic lap from Pierre Gasly to take P4. Sergio Perez, who topped both FP2 and FP3, could not get another lap in before the session was ended and will line up P7, with Valtteri Bottas in P10.

In the short time between FP3 finishing and qualifying starting, Hamilton reverted to the lower-downforce rear wing with which he ran in first and second practice, with Bottas keeping his higher-downforce wing that had been on his car in FP3.

Alongside that, it was a race against time for Williams to change an entire power unit after George Russell lost power in practice due to a water pump leak.

After the interruptions of FP3, cars queued up to get out of the pit lane to get a lap in in case of further incidents which may have hampered them later on.

Like clockwork, then, Lance Stroll locked his right-front tyre and crashed into the wall at Turn 15, punching his steering wheel in frustration and bringing out the red flag – which was of huge benefit for Russell and Williams as it bought them more time to fix his car, which they duly managed in double-quick time.

Leclerc was the only driver to set a flying lap before the session was halted, leaving the rest of the drivers to start from scratch upon the resumption of Q1.

Half the drivers were able to set representative lap times when the green flag was dropped again, with both Red Bulls at the top and both Ferrari cars behind.

Antonio Giovinazzi became the latest victim at T15 as he clattered into the wall and halted the session once again – with nine minutes left on the clock and 10 drivers without a lap time on the board.

But the second restart seemed safer and every driver was able to set a lap time, with Hamilton and Mercedes finding their feet to go fastest in Q1, with both crashed drivers, both Haas drivers of Nikita Mazepin and Mick Schumacher and Nicholas Latifi all being eliminated at the first hurdle.

All drivers made it through the first runs in Q2 relatively unscathed, bar Esteban Ocon grazing the wall at Turn 3 – although the Frenchman was able to carry on.

Just 0.009s covered Verstappen, Perez and Hamilton in the top three initially, with the reigning World Champion extracting as much as he could from a car that had caused the team plenty of trouble in the weekend thus far.

With two minutes remaining in Q2, less than two-tenths covered the top seven runners in what was becoming a remarkably competitive qualifying session.

In trying to get out of the drop zone, Daniel Ricciardo crashed out at Turn 3 after locking up his front-left tyre. This brought out the red flag with just 90 seconds remaining – which stopped the session outright as it was not enough time to get around to start another flying lap.

Sebastian Vettel vocalised his frustration over team radio after missing out on Q3 by 0.029s behind Fernando Alonso, with Ocon, Ricciardo, Raikkonen and Russell all out at the second stage before the top 10 battled for pole.

Leclerc started fastest with a 1:41.218 as he made the most of a tow from Hamilton behind, putting himself 0.345s ahead of Verstappen in P2 after his first flying lap.

Hamilton jumped onto the front row shortly afterwards, though, 0.232s behind the Monegasque driver. But Tsunoda and Sainz’s contact stopped the session abruptly, leaving Leclerc to take his second pole position in a row – but he will at least be hoping to start the race on this occasion after being unable to lead at Monaco last time out.

After the bonkers qualifying session, Lando Norris was slapped with a three-place grid penalty after a red flag infraction, meaning he will drop from P6 to P9 on Sunday’s grid.