Home News Race: Verstappen wins the farce that was the Belgian GP 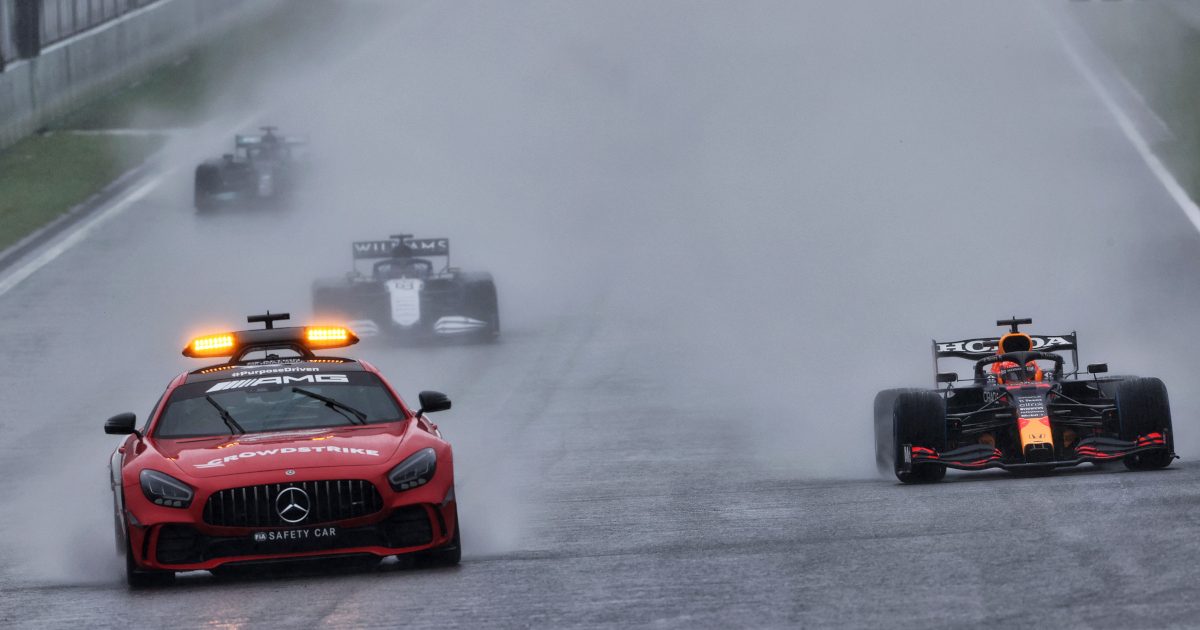 Max Verstappen won, if one can use that word, a Belgian GP in which heavy rain renders the circuit undrivable and Race Control finally called it off on lap 3 behind the Safety Car.

The Dutchman led home George Russell and Lewis Hamilton, and led is the word to use given that no one was permitted to pass behind the Safety Car.

Half points were awarded as per F1 regulations, that being one rule that FIA race director Michael Masi and his stewards did know/adhere to/understand.

With the rain chucking down as the drivers did their out-laps to the grid, Sergio Perez lost it into the wall at Les Combes. Red Bull informed Masi that he would not be starting, a big blow to the team’s championship chances.

Checo will not start the race ❌#BelgianGP 🇧🇪 #F1 pic.twitter.com/Qmfym6pCkx

Such were the conditions on his out-lap that P2 man, George Russell, reported that he “couldn’t see down the straight” even though he wasn’t behind another car so it was no surprise when Race Control declared a Safety Car start, and then announced a ‘delayed start’ – 10 minutes, 5, 5 and 5 again.

Finally underway after 25 minutes the drivers very slowly – but F1 standards – made their way around the 7km circuit, Verstappen and Hamilton both saying they “can’t see anything”. One by one the drivers complained about the conditions, Race Control sending them to the pit lane – ‘start procedure suspended’.

Verstappen, the driver dealing with the least spray, told Red Bull it is “really not that bad”. No one agreed, Daniel Ricciardo saying it was the “right call”. And while the teams waited for the start, the clock was counting down on the three hour maximum race time.

We can’t say for certain, but we’re pretty sure Fernando didn’t do the formation lap on his own earlier…

That gave Red Bull the opportunity to repair Perez’s car, Masi giving Red Bull the go-ahead for the Mexican driver to race, but he’d have to start from the pit lane with the only rule preventing him from racing using the word ‘grid’.

The rain almost put paid to that before Masi and co decided to stop the clock. Citing Force Majeure under the International Sporting Code it was halted after two hours giving F1 an hour to race.

That was followed by weather update, rain, after weather update, still rain, and more weather updates, yip still raining. And then it came, race to resume at 6:17pm with Lance Stroll reported to the stewards as Aston Martin ‘changed for an item of a different specification’ – his rear wing assembly.

Starting behind the Safety Car, with Verstappen the first out and Perez the last, the drivers complained about aquaplaning. The Safety Car stayed out after the first lap, stayed out for the second, and the red flag came out on the third.

Race control have called the drivers back to the pits due to the continuing wet conditions on track #BelgianGP 🇧🇪 #F1 pic.twitter.com/k62m2LV9Z5

Half points were awarded with Verstappen taking 12.5, Russell nine, Hamilton 7.5 and so it went down to P10. Williams, with Nicholas Latifi in ninth, claimed a second double points-haul for the second race in a row, the only team aside from Ferrari to score with two cars in Belgium.