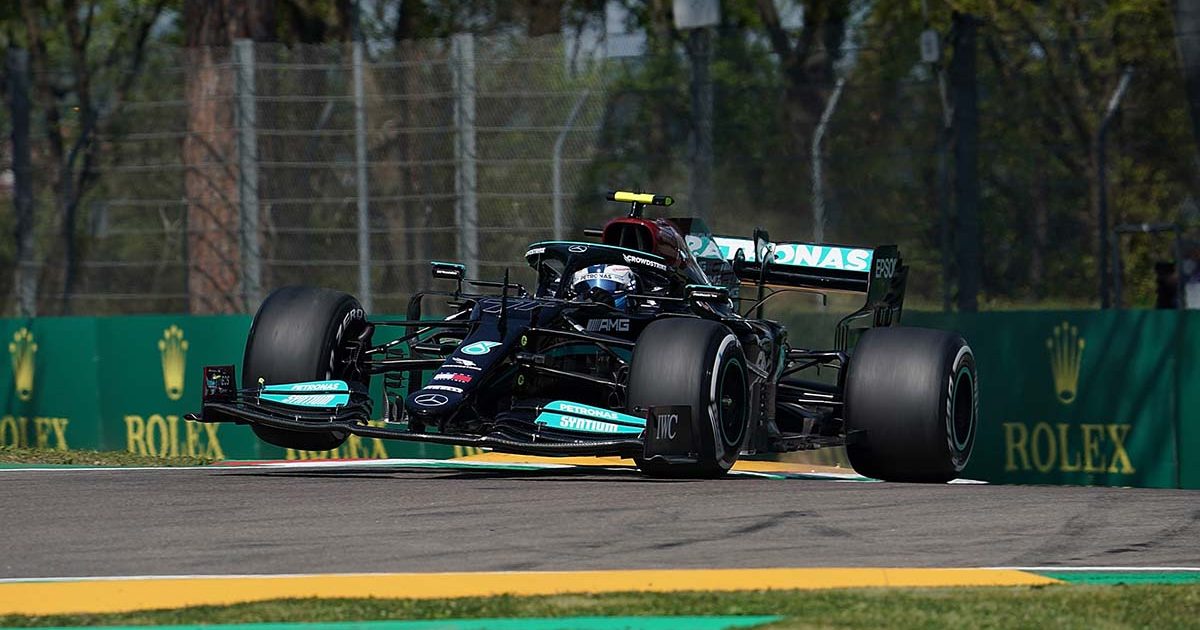 Friday finished how it started for Mercedes with Valtteri Bottas and Lewis Hamilton combining for another 1-2 in FP2 ahead of the Emilia Romagna Grand Prix.

Just 0.010s separated the Mercedes pair, but Max Verstappen was unable to get involved in the fight after he suffered an on-track stoppage just 10 minutes into the session.

Instead, his former team-mate Pierre Gasly grabbed P3 with a stellar lap ahead of the Ferrari duo of Carlos Sainz (P4) and Charles Leclerc (P5).

Technical gremlins caused plenty of problems in a very messy first practice session, but the two biggest casualties – Perez and Ocon after a collision – were both back in action for when the track lights green in FP2, which promised to be slightly less stressful given team radio and GPS data were back working again.

But that promise did not last particularly long for Red Bull as, just 10 minutes into the session, Verstappen was forced to stop on track with a mechanical problem. Session over for the Dutchman who is somewhat cursed in Italy – after suffering three DNFs at Mugello, Imola and Monza in 2020.

After a brief Virtual Safety Car period, 19 drivers got cracking with their Friday afternoon programmes again. Haas driver Nikita Mazepin was a late starter after the team completed repair work on his car following two big offs in FP1.

Ahead of the qualifying simulation runs, it was a Mercedes 1-2 at the top of the timesheet with 0.121s separating Bottas and Hamilton. Charles Leclerc provided a brief moment of shock as he went P1, but his time was soon deleted for exceeding track limits.

Hamilton could not find any further improvement on his first hot lap, but AlphaTauri’s Pierre Gasly did to dislodge Hamilton from P2. Gasly was just 0.078s shy of Bottas’ benchmark after he strapped on some fresh red-striped soft tyres.

The reigning World Champion did improve at the second time of asking, though, yet it was still not enough to knock Bottas off top spot. 0.010s was now the narrow margin between the Mercedes duo, with Gasly dropping to P3.

As attentions turned to the race simulation runs, there was an interesting exchange between Mazepin and his engineer with the Russian firmly rooted to the foot of the timesheet.

Team radio: “So losses to Mick. Turn 9 apex speed. Turn 17…”
Mazepin [interrupting]: “Let’s talk about that after the run.”

The session came to a rather abrupt end with four minutes left on the session clock as Leclerc became the latest driver to crash at this old-school, tricky circuit, bookmarking a rather scrappy start to on-track events at Imola.