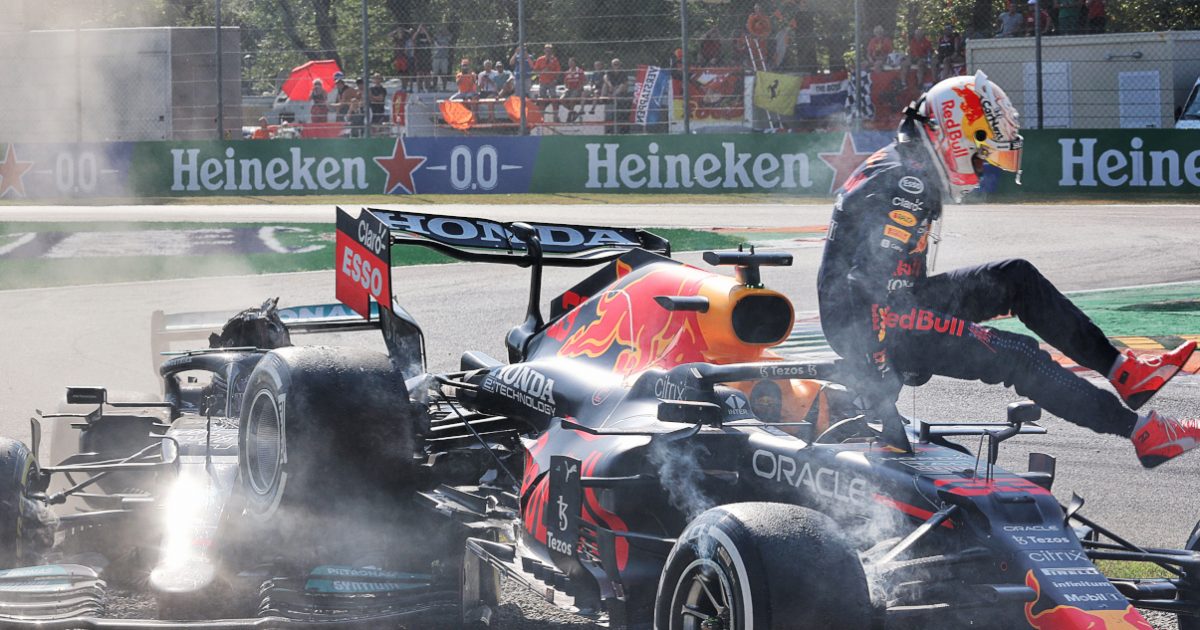 Daniel Ricciardo recorded a shock, but deserved, win for McLaren at the Italian Grand Prix as the title protagonists took each other out.

Ricciardo got the jump on Max Verstappen off the line and kept the Red Bull driver behind him while Lando Norris battled Lewis Hamilton and took third.

But with neither title rival having the race they wanted, tensions boiled over as the two went wheel-to-wheel midway through the race. The clash ended with Verstappen’s RB16B sitting on top of Hamilton’s Mercedes.

Ricciardo took advantage, racing to the win ahead of Norris – McLaren’s first P1 for more than 3,000 days. Sergio Perez crossed the line P3 but a penalty meant he dropped to fifth, Valtteri Bottas instead joining the McLaren team-mates on the podium despite having started P20.

It's his first victory since Monaco 2018, and his maiden podium for McLaren. Incredible!#ItalianGP 🇮🇹 #F1 pic.twitter.com/tQ8Ulg4SzL

The race got under way with just 19 drivers. While it briefly looked as if Pierre Gasly would not take the start, the Frenchman saying his rebuilt AT02 was “f**ked” and that he “can’t race like this”, AlphaTauri worked on the car in the garage and he took his spot – his spot in the pit lane that it is, Honda having put him onto a fourth engine for the season. But then his team-mate Yuki Tsunoda ran into trouble, the Japanese driver’s car pushed off the grid just minutes before the formation lap.

As for the grid, that was headed by Max Verstappen and Daniel Ricciardo on the front row with Lando Norris and Lewis Hamilton – on the hard Pirellis – on the second, 16 of the 20 drivers on the medium tyres. Robert Kubica, Valtteri Bottas and Gasly also opted for the hard tyres.

Ricciardo took the lead into the first corner, outpowering Verstappen off the line. Hamilton, having passed Lando Norris, tried to take the fight to Verstappen but the Red Bull driver was not losing another position, held his line, there was minor contact and Hamilton was sent bouncing over the kerbs. He lost P3 to Norris. Hamilton: “He pushed me wide!”

Behind them, Antonio Giovinazzi, having started P7, went nose first into the barrier after getting it wrong at the chicane before just coming back onto the racing line where he was tagged by Carlos Sainz. Giovinazzi pitted for a new nose, dropping all the way to the back of the field. Insult to injury, he was penalised five seconds for an unsafe rejoin. There was also drama at Aston Martin with Sebastian Vettel complaining about Lance Stroll’s antics at the first Lesmo. Four laps in and Gasly retired, parking his AT02.

And all the while Ricciardo kept Verstappen at bay, leading a grand prix for the first time since 2018. He was not doing it entirely legally though, twice having his lap time deleted for exceeding the track limits at Curva Alboreto. Verstappen reported to Red Bull it was “really hard” to close that final second between them.

Brilliant battle between Sainz and Perez 💪

Checo eventually gets past and is up to P6#ItalianGP 🇮🇹 #F1 pic.twitter.com/fpiO6kIYsi

Valtteri Bottas, despite starting P20, took the final points-paying position off Latifi on lap 13. Hamilton was not having as easy a time passing as his team-mate, Norris’ elbows out as he defended third place from the reigning World Champion. He dropped six seconds behind Verstappen with Leclerc closing in, while outside the points Esteban Ocon and Vettel banged wheels, the Alpine driver given a five-second penalty.

Race leader Ricciardo was the first of the leaders to pit, stopping on lap 23, coming out behind Sainz. Verstappen was quickly told to do the opposite to Ricciardo, but was then told to “box” on his next lap. The race was on, in the pits, and it was an 11-second stop for Verstappen due to a front right problem. He came out P10.

Verstappen’s troubles were made worse as Hamilton finally overtook Norris, the McLaren pitting on the next lap. Hamilton stayed out, leading the grand prix. Hamilton stopped on lap 26, his hard tyres changed for mediums, the opposite strategy to his rivals. He fell behind Norris in the tussle, the McLaren with Verstappen on his rear wing…and then it happened, the championship protagonists clashed.

Fighting into the first chicane, Verstappen was on the inside of Hamilton, again neither giving an inch. They both ended up in the gravel with Verstappen’s Red Bull half on top of Hamilton’s Mercedes. “That’s what you get when you don’t leave space,” was the Dutchman’s assessment as the Safety Car came out with Ricciardo leading ahead of Leclerc, who benefitted with the SC, and Norris. Mercedes reported Hamilton was “okay”, saved from a potential head injury by the Halo.

The race resumed at the end of lap 30, Ricciardo leading with Leclerc and Norris bouncing off each other into the first chicane. Leclerc’s defending did not last long with Norris up to second, and Leclerc was then off podium, losing out to Perez, who was given a five-second penalty for leaving the track and gaining an advantage, and then Bottas, losing three places in four laps. At the back of the field, Mick Schumacher and Nikita Mazepin were again trading paint, the stewards giving Mazepin a five-second penalty, the fourth driver penalised.

Norris, worrying about his position, told McLaren to get Ricciardo to up his pace as he was running too “slow”. Ricciardo was given the hurry-up with Norris then told that staying as they are is “best” for McLaren. They were 1-2 with 10 laps to go with Norris two seconds up on Perez, who had just overtaken Bottas. Mazepin, having been told of his penalty, spun and then two laps later parked his Haas on the side of the track, bringing out the VSC for a lap, a brief respite for Ricciardo.

Back racing, McLaren told the Aussie again to up his pace, but the McLaren drivers did have a bit of breathing room with Perez, P3, having a penalty. The laps counted down as one could visibly see the tension building on the McLaren pit wall.

Ricciardo raced to the win, his first since 2018, with Norris joining his team-mate on the podium. Perez crossed the line P3 but dropped down the order as a result of his five-second penalty. Bottas, having started P20, joined the McLarens on the podium. It had been 3,213 days since McLaren last won a Formula 1 grand prix.

Leclerc was fourth in the classification ahead of Perez with Sainz, Stroll, Alonso, George Russell and Ocon completing the points.