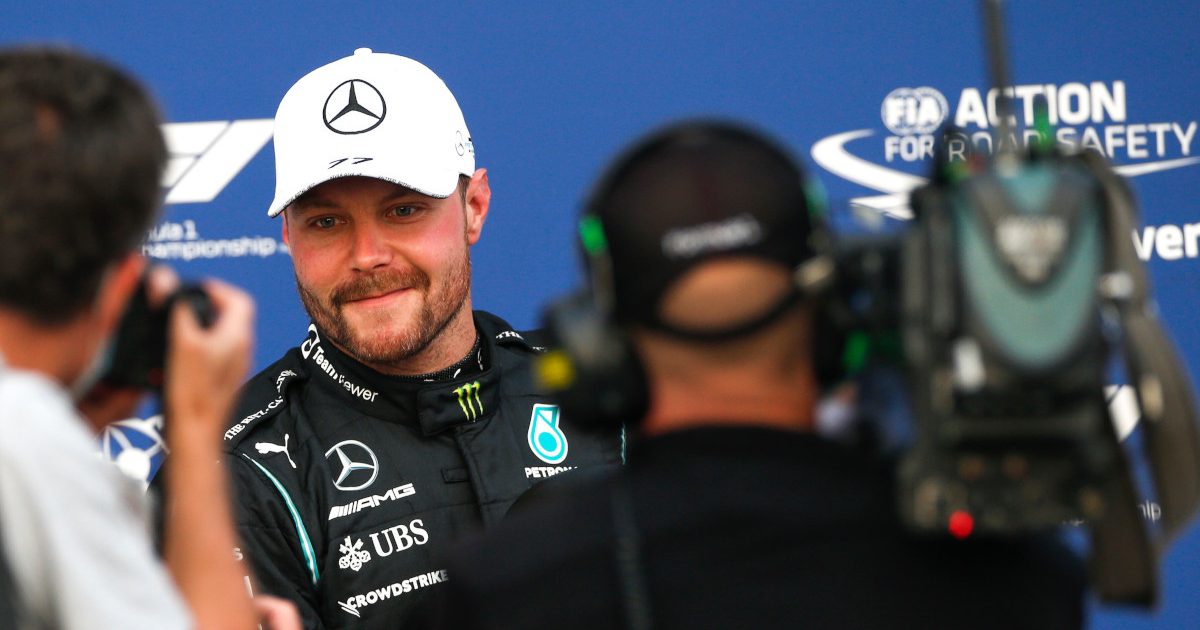 Valtteri Bottas clinched the victory in the Sprint Qualifying for the Italian Grand Prix, taking the three points and pole position – but one he’ll be handing over to Max Verstappen.

Bottas beat Verstappen to the chequered flag in the 18-lap this-is-not a race with Daniel Ricciardo finishing third.

The Mercedes driver, though, won’t be starting P1 with Mercedes having put him onto his fourth engine of the season earlier in the weekend.

Despite taking pole position, he’ll start P20 because of that penalty with Verstappen handed P1 for Sunday’s race. Ricciardo will join him on the front row of the grid.

Mercedes’ plan to use team orders in Lewis Hamilton’s favour came to naught as the Brit was shuffled down the order at the start, falling behind both McLarens. He finished P5.

He led from start to finish! Max Verstappen takes P2, with Daniel Ricciardo in third ahead of Lando Norris#ItalianGP 🇮🇹 #F1 pic.twitter.com/fvZFu50Iw5

Despite Carlos Sainz’s heavy FP2 crash, the Spaniard lined up on the grid in his P7 qualifying slot with his mechanics having rebuilt his car, with his Ferrari team-mate Charles Leclerc alongside him, the Monégasque driver having earlier visited the medical centre complaining of illness.

The 18-lap sprint qualifying saw the drivers all have a free tyre choice, everyone going for the mediums except the Lando Norris, Daniel Ricciardo, Sebastian Vettel, Lance Stroll, Esteban Ocon and Yuki Tsunoda. Points would be going to the top three, that – at least on the grid – was Valtteri Bottas, Lewis Hamilton and Max Verstappen.

Bottas made a flying start with Verstappen following him up as Hamilton had to move across the track to block the fast-starting Norris, the World Champion shuffled down the order to P5, behind both McLarens

It didn’t take long for the Safety Car to make an appearance, Pierre Gasly clipping a McLaren and breaking his front wing. With that under his car he went flying off at Curva Grande, the 2010 Italian GP winner’s sprint qualifying over. Just before the SC came out, Tsunoda clipped Robert Kubica, pitching the Alfa Romeo into a spin.

A frantic start. Gasly goes off at the Curva Grande. He's radioed to the team that he's ok.

And the Safety Car comes out #ItalianGP 🇮🇹 #F1Sprint pic.twitter.com/uOT2mbxTaX

The Safety Car pitted at the end of lap 3, Bottas staying P1 ahead of Verstappen and the McLarens, Hamilton holding on for fifth place ahead of the Ferraris of Leclerc and Sainz and Antonio Giovinazzi.

Behind them Sergio Perez overtook Lance Stroll for ninth, but off the track on lap 11. Despite that he stayed ahead of the Aston Martin until Red Bull told him to give the position back. He passed Stroll on the next lap, this time staying on the track into the chicane.

Lap after lap Bottas ran about two seconds ahead of Verstappen, the Finn unable to help Hamilton and Verstappen having no genuine need to fight the Mercedes driver for the lead.

Bottas took the victory in the 18-lap sprint qualifying, scoring three points, with Verstappen P2 and bagging two points. Ricciardo was third, earning him a single point while Norris, well Norris earned Verstappen’s thanks as he kept Hamilton behind him throughout the 18 laps.

Leclerc was sixth ahead of Sainz and Giovinazzi with Perez holding onto his P9 despite the stewards questioning whether he had taken too long in giving Stroll the position back earlier in the race. The Aston Martin was P10.

Perez is chasing down Giovinazzi but the Italian is holding firm in P8 #ItalianGP 🇮🇹 #F1Sprint pic.twitter.com/tv92oKUrFV