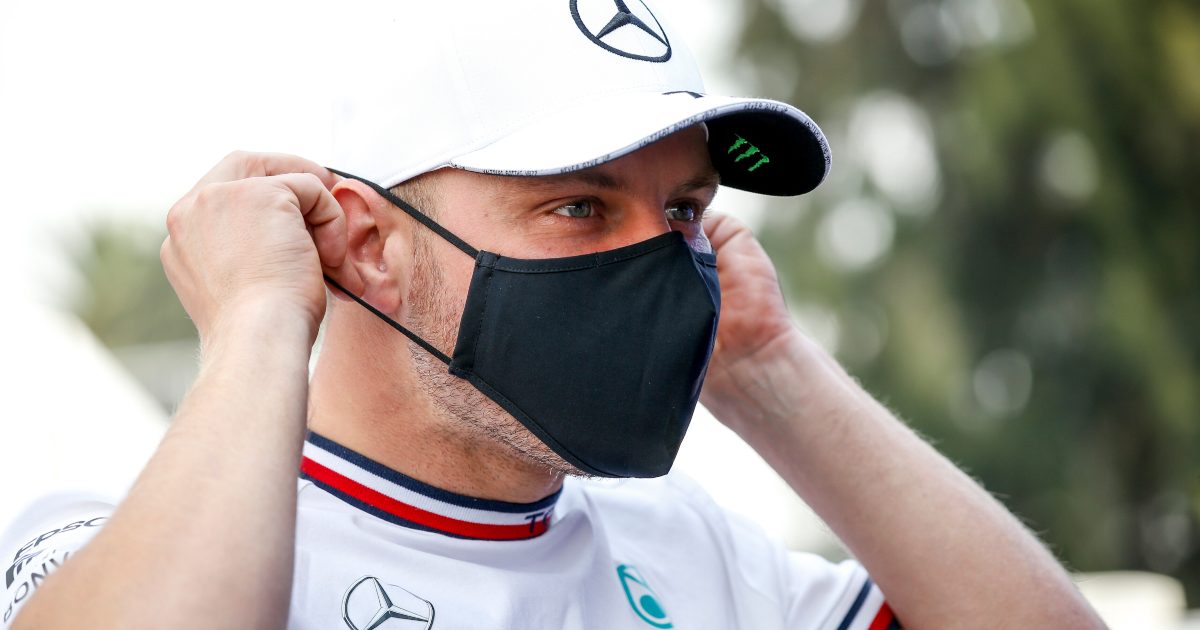 Valtteri Bottas went fastest in FP1 for the Mexican Grand Prix, while Lewis Hamilton received a reprimand for re-entering the track in the wrong place.

Hamilton was only 0.076s slower than his Mercedes team-mate to rank second in the first session, with the Red Bulls of Max Verstappen and Sergio Perez in P3 and P4 respectively.

Hamilton came back on track at Turn 3, having run wide at Turn 1 and taken to the grass as he locked up on a flying lap, and he has been called to see the stewards to discuss the incident because he should have gone around a specific bollard.

Dust billowed into the air as the cars headed out of the pit lane, which meant there was plenty of running to be done to get grip into the track, which hasn’t been used since early 2020 due to the Covid-19 pandemic.

Home hero Perez received a standing ovation from the home crowd as he took to the track for his first laps, but the drivers were clearly cautious to start with in the tricky, hazy conditions. As a result, it took a little while for the times to start coming down as the drivers pounded round.

A 1:21.327 was the first benchmark time from Bottas – almost seven seconds slower than Verstappen’s pole time in 2019.

Charles Leclerc had complained about the amount of dust on team radio, and he spun his Ferrari into the wall at Turn 16, damaging his rear wing in the process – before Perez followed suit just seconds later in an identical incident.

Half of the Red Bull rear wing snapped off in the incident, but the Mexican was seen out of his car as his team worked on a fix, which was hardly ideal for Perez at his home race as he eventually missed out on half of FP1.

Elsewhere, the reigning World Champion tested the limits heading into Turn 1 at full pelt, locking his front right tyre under braking and having to take to the grass to get himself back on track, while Bottas ran wide on a couple of occasions as he searched for speed.

Due to the way Hamilton re-entered the track, however, the stewards confirmed he is under investigation for not coming back on in the right place, which will be looked at after the session finished.

Verstappen and Hamilton topped the times half-way through FP1, but lap times then began to look more representative as the dust started to clear away and the cars went out on the soft tyres.

Daniel Ricciardo said prior to the weekend that both McLaren drivers would put up a fight for P3 in the Constructors’ Championship, but Lando Norris appeared to disobey instructions from his team, as he refused to offer his team-mate a tow in what would have been a practice qualifying run, insisting over team radio that he wanted to complete his lap on his own.

Team radio: "What we'd like to do is open the lap and practice towing with Daniel."

At the top of the leaderboard, the Red Bull cars tucked in narrowly behind the Mercedes pair, as the Silver Arrows looked on the pace in the first session on Friday – potentially allaying fears that they would lag behind their title rivals in Mexico.

Pierre Gasly was ahead of Carlos Sainz for P5 and P6, followed by Fernando Alonso and Charles Leclerc, with Esteban Ocon and Sebastian Vettel rounding out the top 10 in FP1.

The stewards later reprimanded Hamilton – for the first time this season – as he had failed to drive around the bollard at Turn 3 on returning to the track, while Kimi Raikkonen met exactly the same fate for a near-identical incident later in the session.