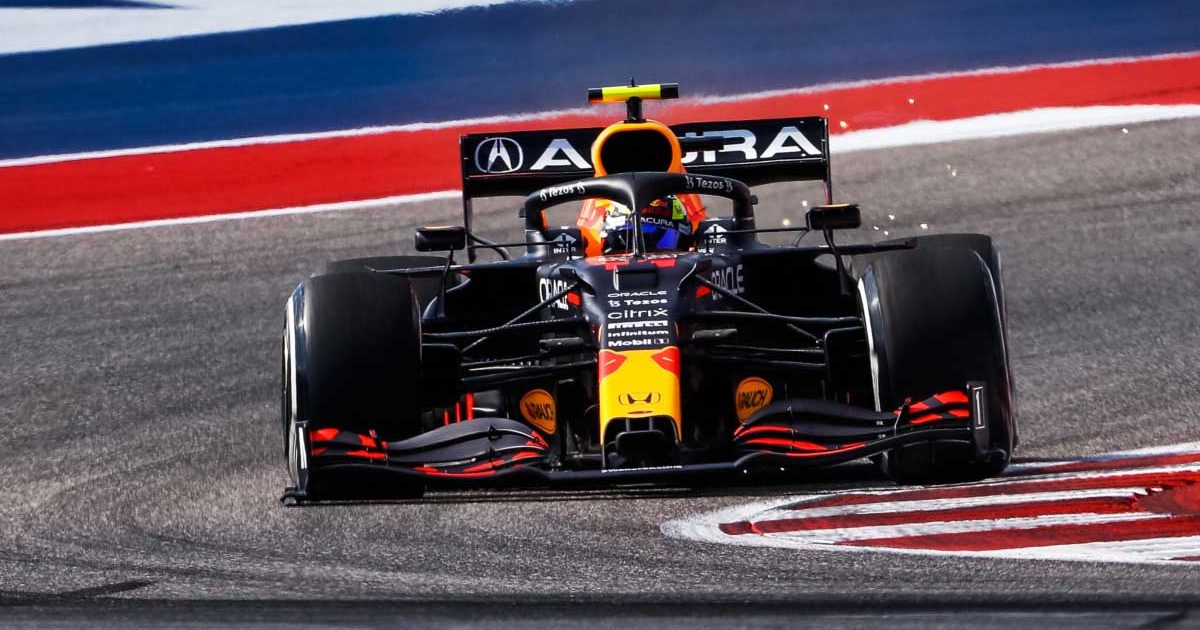 Sergio Perez topped FP2 in Austin as Red Bull clawed back their gap to Mercedes, with Lando Norris putting himself second fastest.

The Mercedes drivers of Lewis Hamilton and Valtteri Bottas finished third and fourth in practice and, despite running qualifying simulations, lapped slower than they had managed in first practice – albeit with Hamilton’s fastest lap being deleted, which was faster than Perez had managed.

Max Verstappen was down in P8 after backing out of his own attempt at a flying lap, with the other McLaren of Daniel Ricciardo rounding out the top five at the Circuit of The Americas.

After Mercedes had appeared so dominant in FP1, all eyes were on how the teams would respond in their qualifying runs in particular in the second free practice session.

The track was a hive of activity in the early stages, with the teams keen to get out in conditions which saw an increased track temperature compared to the morning’s running, making tyre management practice key as the drivers got more laps on the clock.

But Norris would not be able to follow most of his rivals early on, complaining of an obstruction in his car which hampered his steering, which brought him back into his garage for his mechanics to sort and lost him about 10 minutes of running.

But the two title rivals would soon run side-by-side on track, as they went full pelt up to Turn 1 in what looked like almost racing conditions.

Hamilton would pull away, but Verstappen came onto his radio and said “stupid idiot,” about the Mercedes driver, followed by a middle finger being raised out of his car.

We're already racing in Austin as Hamilton takes the inside line and goes ahead of Verstappen at Turn 1.

Unlike in first practice, Red Bull were on par with their fellow title contenders on pace on the medium tyre, with Sergio Perez pipping Bottas to the top of the timesheets on their initial runs on the medium tyres, with Verstappen and Hamilton in tow and all four cars lapping within a couple of tenths of each other.

Soon afterwards though, the soft tyres began to appear as qualifying simulations started, and Hamilton quickly dropped into the 1:34s and put a healthy gap between himself and the rest of the field – but his lap time was deleted, due to him running past track limits at Turn 19.

Perez put himself top of the standings ahead of Norris, but Verstappen could not find clear air in a couple of attempts at a flying lap due to the traffic situation around him.

The Red Bull driver was audibly frustrated as he could not make his qualifying sim work, saying “I’m boxing, **** this” over radio, preferring to focus on his long runs instead and making his eighth position on the leaderboard probably unrepresentative.

The long run simulations showed both Red Bull drivers had solid pace driving a practice stint, while Hamilton stayed in his garage with an issue to be sorted, but he was able to come out for the final few minutes and put a shorter run in.

After having to pull over in the first session, Fernando Alonso was in the wars again towards the end of the session, as he lost control of his Alpine at Turn 19 when turning in.

The double World Champion flew backwards towards the barriers on the outside, but the impact appeared relatively minor as he managed to get moving again and bring his car back to the pits.

Come the chequered flag, though, Lance Stroll took sixth place in his Aston Martin, Charles Leclerc and Carlos Sainz were either side of Verstappen on the leaderboard, while the Alfa Romeo of Antonio Giovinazzi rounded out the top 10.

All best times on softs unless stated