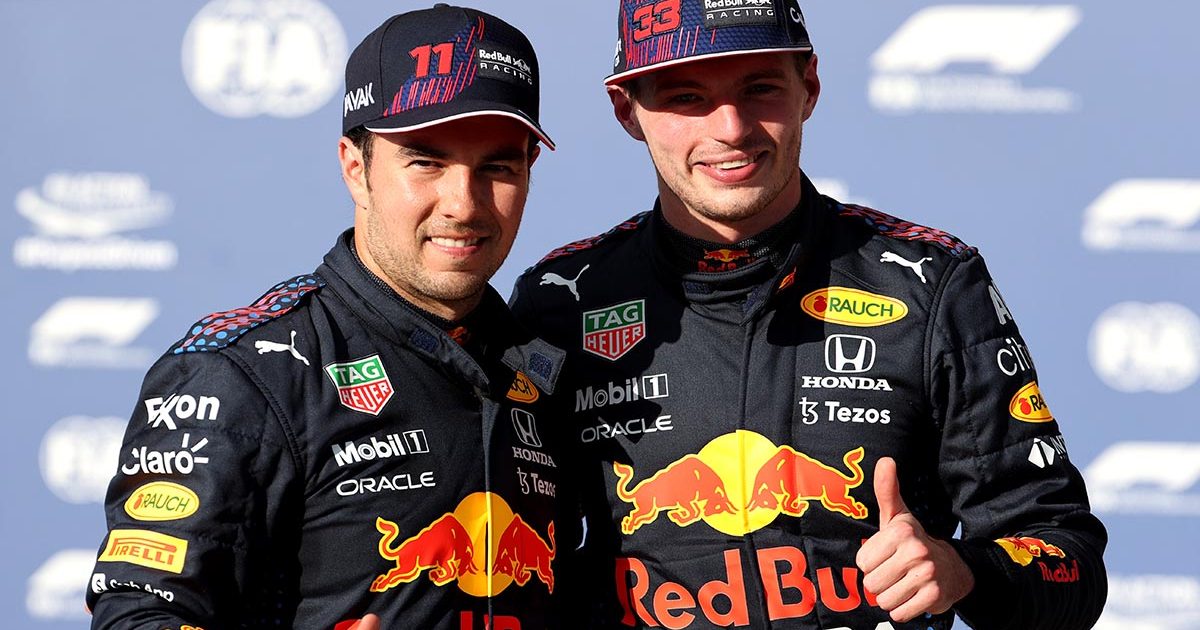 Max Verstappen and Lewis Hamilton will go head-to-head from the front row in Austin, with the World Championship leader snatching pole away from his title rival.

With spots of rain starting to fall at COTA, Verstappen knocked Hamilton off top spot with a 1:32.910, two tenths quicker than Hamilton who improved significantly in his final Q3 run.

Sergio Perez, who had found himself on provisional pole after the first hot laps of Q3, had to settle for P3. Valtteri Bottas, qualifying P4, will drop five places to P9 because of another engine penalty.

That was qualifying at its dramatic best!

Max Verstappen and Lewis Hamilton lock out the front row for the seventh time this season#USGP 🇺🇸 #F1 pic.twitter.com/Mb7NjkmlKp

In the midfield battle, Ferrari duo Charles Leclerc and Carlos Sainz will start ahead of their McLaren rivals, while Pierre Gasly and Yuki Tsunoda in the AlphaTauri cars also made it through to Q3.

There was some frantic work going on in the Red Bull garage prior to qualifying as the mechanics reinforced the rear wings on both cars, having discovered a hairline crack on Verstappen’s RB16B during FP3.

Both were ready, though, when the track went green for qualifying – which came with a surprise 40 per cent risk of a rain shower – and immediately laid down the early marker with their very first laps in Q1.

Verstappen pumped in a 1:34.521 to go 0.054s ahead of team-mate Perez, while Bottas and Hamilton were one and two tenths down respectively following their opening attempts.

Both McLaren drivers would then join the party with 1:34.407 the new benchmark set by Ricciardo; Norris slotted himself into P3 with former team-mate Carlos Sainz also getting ahead of Perez, Bottas and Hamilton.

Verstappen and Perez soon returned to P1 and P2 respectively on their second hot laps, completed with five minutes still left on the session clock. The former led the latter by a mere 0.017 seconds.

The Red Bull pair, Ricciardo, Norris and Sainz all took a watching brief for the final laps of Q1. They firstly saw Hamilton improve slightly on used soft tyres to P7 and then Leclerc jumped up to P1 on the timesheet with a 1:34.153.

Down at the bottom end of the timesheet, Lance Stroll, Nicholas Latifi, Kimi Raikkonen, Mick Schumacher and Nikita Mazepin were all eliminated from Q1 – none of them able to punish a late spin from Antonio Giovinazzi.

Hamilton and Bottas, plus Verstappen, Perez, Leclerc, Ricciardo, Norris, Ocon and Gasly all re-emerged on track with medium tyres strapped on in Q2, with full focus on the starting tyre strategy for Sunday’s race.

Verstappen set an eye-bulging opening time, a 1:33.464 which was 0.333 seconds clear of Hamilton in second and four tenths clear of the rest of the top five. Perez had his first lap time of Q2 deleted after exceeding track limits at Turn 19, so too did Ricciardo for the same offence at Turn 9.

Both drivers managed to clamber out of the Q2 elimination zone, but the same could not be said for Esteban Ocon, Sebastian Vettel, George Russell, Antonio Giovinazzi and Fernando Alonso.

Vettel, Alonso and Russell are set to line up from P18, P19 and P20 respectively after all three drivers had completely new power units fitted ahead of lights out on Sunday afternoon. Russell was relegated to the bottom of the trio after he had his final Q2 lap time deleted for track limits.

Then, it was crunch time. Hamilton was first to throw the gauntlet down with 1:33.564 but, within a blink of an eye, Bottas bettered that by 0.089s.

Huge cheers then erupted from the packed-out grandstands at COTA. Firstly for Verstappen as he leapfrogged both Mercedes cars in the pecking order and then, surprisingly, for Perez who put himself on provisional pole, shaving 0.019 seconds off Verstappen’s best.

Hamilton then put himself on provisional pole by 0.061 seconds in the closing stages, but the battle was far from over as Verstappen went quickest of all through the first sector.

With spots of rain dropping in the pit lane, Verstappen kept his cool and ensured he will be the one with that perhaps crucial edge heading into Turn 1 on Sunday.

Go get stocked up on popcorn.