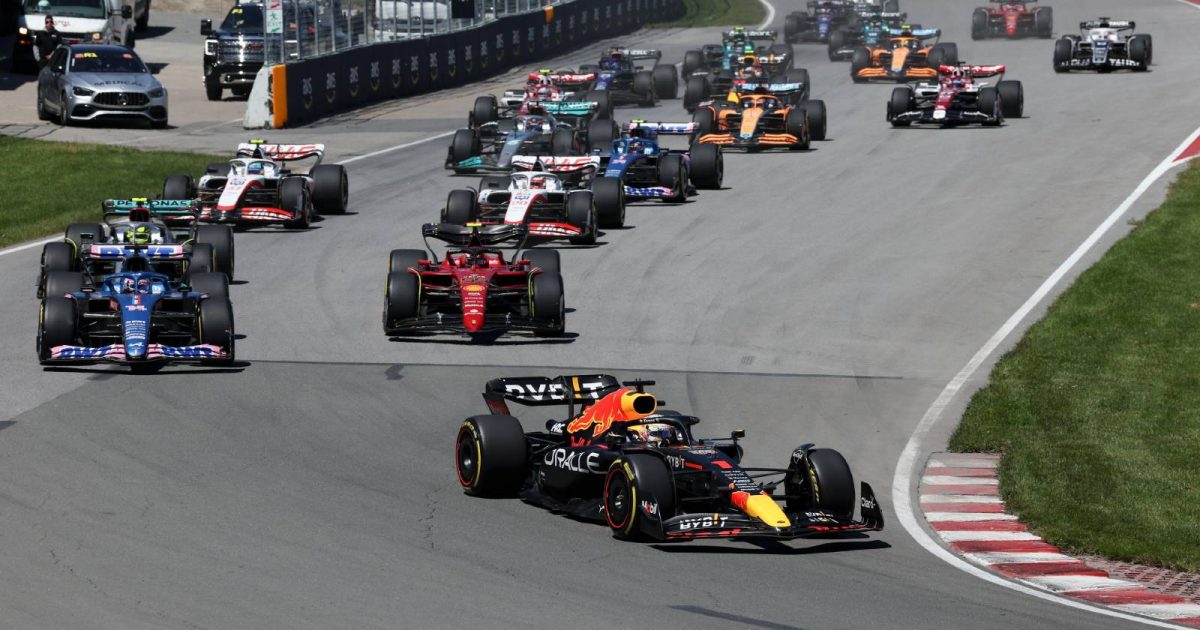 Max Verstappen held off a robust challenge from Carlos Sainz in the Canadian Grand Prix to win for the sixth time in eight races and extend his World Championship lead to 46 points.

As Formula 1 racing returned to Montreal for the first time since 2019, the romp to victory from pole position many had expected for the title-holder proved to be a much more difficult task.

A cakewalk had been predicted in some quarters because Verstappen’s two World Championship rivals Charles Leclerc and Sergio Perez had been out of position at the start following a wet qualifying session and an engine penalty for the Ferrari driver, who was 19th on the grid, but instead the Red Bull man had to fend off a late thrust from Sainz.

Although Fernando Alonso had spoken of wanting to lead on the first lap from P2, it was Verstappen who got away in front as the first five on the grid maintained position but Mick Schumacher, from his highest ever starting place of sixth, dropped behind Esteban Ocon and George Russell on the opening tour.

Kevin Magnussen stayed fifth but had visible damage to his front wing from a collision with Lewis Hamilton, the team initially telling him they were unconcerned, while Sainz cleared Alonso on lap three but was not looking likely to threaten Verstappen as he quickly reported graining on his front left tyre.

Despite Haas‘ message to Magnussen, the black and orange flag was shown to the Dane as he fell behind Russell and was forced into the pits for a front wing change, falling to last position.

On lap nine came the first retirement as Perez, who had started 13th and worked his way up to 10th, lost drive and parked up trackside, bringing a Virtual Safety Car period. Of the front-runners, Verstappen and Hamilton took the opportunity to make a cheap pit-stop for hard tyres, dropping to third and sixth respectively.

That soon became fifth for Hamilton as he passed Ocon, while Verstappen overtook Alonso three laps later and set about catching leader Sainz whom he trailed by just over five seconds but quickly started to eat into the deficit.

Schumacher’s hopes of a long overdue first points finish were shattered on lap 19 as, having just been passed by Zhou Guanyu’s Alfa Romeo, he pulled into the same run-off area as Perez – with the team able to do nothing but apologise. That meant another VSC and this time Sainz and Russell entered the pits, leaving Verstappen eight seconds out in front of Alonso who had yet to stop.

Oh, Mick. It was all going so well 🤦#CanadianGP 🇨🇦 #F1 pic.twitter.com/EtwCvhO4OY

Hamilton, on the fresher rubber, moved up to third by passing the yet-to-stop Alonso, whose strategy was starting to look questionable as he reported graining. The Spaniard eventually had the hard tyres fitted on lap 29 and came out behind sixth-placed Leclerc, who had made strong headway from his unpromising grid slot but was finding Alonso’s team-mate Ocon a tough nut to crack.

After many more laps than he would have cared for stuck behind the Alpine, Leclerc eventually made his pit-stop on lap 42 but it was a slow one – another addition to the litany of recent Ferrari mistakes – and the Monegasque fell to 12th, now part of a DRS train.

On the next lap Verstappen made his second stop, for another set of hard tyres, re-emerging alongside Hamilton but having to yield to the Mercedes. The Dutchman was fuming over the team radio but while he breezed past Hamilton, who promptly ‘pitted’, it was a slight concern for the Red Bull man as Sainz had been whittling away at his lead – Verstappen now 10 seconds behind.

Sainz had been angling for a Safety Car and got it on lap 49 when Yuki Tsunoda, who had just been into the pits, came out and went straight into the wall at comparatively low speed. Ferrari got their man in and out, on hard tyres, right behind Verstappen whose rubber was six laps older.

Who would have the greater pace when racing resumed at the end of lap 54? That was Verstappen initially, but his former Toro Rosso team-mate Sainz worked his way into a challenging position with DRS as Ferrari received another boost when Leclerc passed Ocon for fifth.

Try as Sainz did to take a maiden F1 triumph, he could never quite draw alongside Verstappen and so victory went Red Bull’s way for the sixth consecutive race.

Hamilton completed the podium ahead of his Mercedes team-mate Russell, with Leclerc fifth and followed home by Alpine duo Ocon and Alonso, the Alfa Romeos of Valtteri Bottas and Zhou and, on home soil, Lance Stroll in the Aston Martin.

However, after the race Alonso was demoted from seventh to nine by the stewards for weaving on the straight and incurring a five-second penalty, promoting Bottas and Zhou.