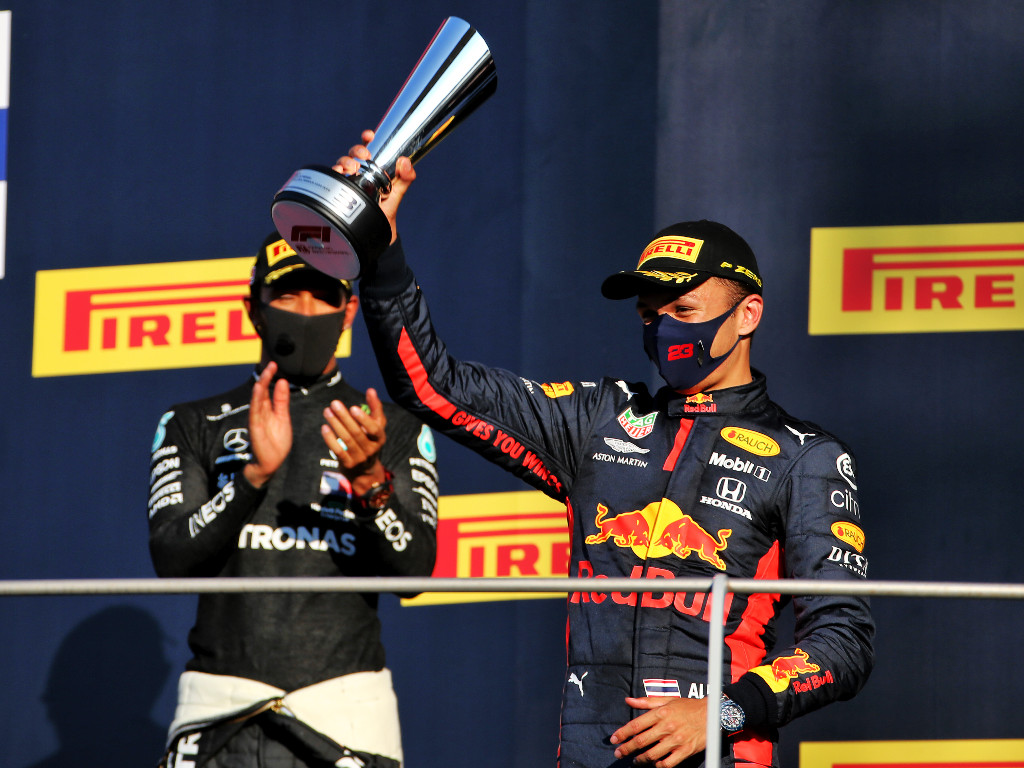 Alex Albon said he had “flashbacks” to his two previous podium-costing crashes when passing Daniel Ricciardo for P3 at the Tuscan GP.

The Thai driver finally claimed his first podium in Red Bull colours with P3 at Mugello, sealing the deal with a late pass on Ricciardo around the outside.

Of course he should arguably have already been a podium finisher by now, having missed out on golden opportunities at Brazil in 2019 and Austria this year thanks to collisions with Lewis Hamilton.

And Albon admitted to having “flashbacks” to those crashes as he attacked Ricciardo, but this time made it stick and reaped the rewards.

“It was tricky out there,” he told reporters at Mugello.

“We had to work for it. It was nice to finally get that podium, under the circumstances as well. We weren’t good off the line, so a lot of the overtakes had to come on track.

“When you lose positions at the start, you always feel it will be more hard work, but you never doubt you can get back up there. The first stint, I used a lot of my tyres to overtake, I think, two cars.

“On the mediums, we were strong, so I knew the pace was there, but I was a bit afraid with another red flag as I was happy to be in that position. The Renault was strong at starts, Racing Point, too. It fired me up when we lost another position off the start, but I knew we had the pace.

“It was more about patience during the race, and making sure you don’t use the tyres too early so you had something for overtakes later on.

“We have been good in the last corner, good in last sector, this weekend which is good on a circuit where there is only one place to overtake – at Turn 1,

“I didn’t catch the Renault’s as much as I thought, so it was a last minute dive on the outside.

“Of course I was a little worried, but I left enough space. When you send it round the outside, you’re hopeful, and you have flashbacks to previous times when fighting for podiums, but we managed to get through unscathed.”

Mr Round the Outside stays true to his name to take his first #F1 podium 🏆 #TuscanGP 🇮🇹pic.twitter.com/tzfHY1Gvhh

Albon is the first Thai driver in history to finish on the F1 podium and rose to P5 in the Drivers’ Championship as a result of his P3.