Home News Alonso ‘will always be a fan of this show’ 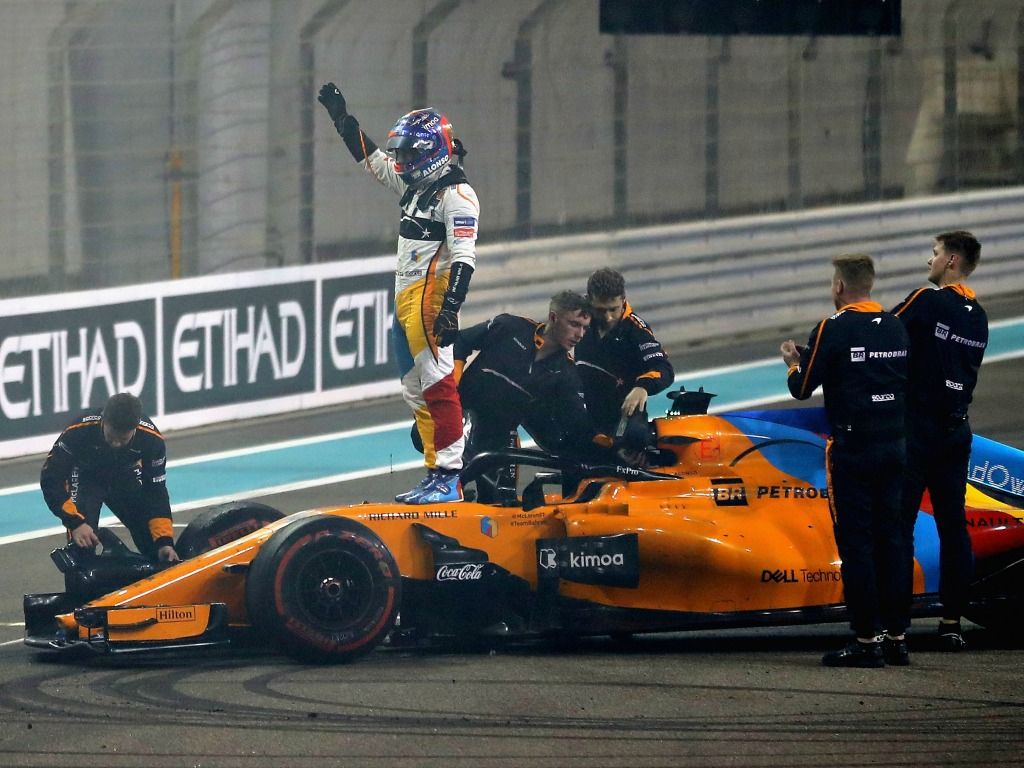 Fernando Alonso has officially bowed out of Formula 1, but not without a parting message, saying he will always be a fan of the sport.

The Spaniard finished in P11 in his final race for McLaren, and in F1, after a 17 season career which saw him take home two Drivers’ Championships.

Alonso joined the top three on the grid at the end for the post-race interviews, and even did donuts with Lewis Hamilton and Sebastian Vettel.

We knew they were coming 🍩

But we didn't know it would be these three 👀 😍#AbuDhabiGP #F1 pic.twitter.com/PAZF1QEsfA

“As long as I am not commentating, like some of the ex-Formula 1 drivers,” Alonso told David Coulthard about returning.

“But yeah, it has been a pleasure racing with these champions and I feel very privileged, with you too DC.

“Thanks for everything, thanks Formula 1, I will always be a fan of this show.”

In the paddock afterwards, the two-time Champion reflected a bit more on his memories of the sport, and what he will take away from F1.

“Well it is going to be a good memory, you know,” he admitted.

“The whole package of Formula 1 will be fantastic journey from a very young age to now.

“Fighting always in any circumstances, in any car, and I think, achieving a lot of success that I never expected.”

“I came from a country with no tradition, you know,” the former Minardi, Renault and Ferrari man explained.

“My father was not a racing driver so it was all by surprise and it was all welcome.

“So happy for that, happy to keep even the last weekend very emotional, with all the things Formula 1 prepared for me and also my team.”

One of those things included the decoration of the drivers’ briefing room in Abu Dhabi, which was painted in his honour, and will forever be known as the Fernando Alonso Drivers’ Briefing Room.

We gave the driver briefing room a special lick of paint in honour of @alo_oficial's #F1 farewell. We think he likes it 😉#GraciasFernando pic.twitter.com/nR0rqO3qOa

There were plenty of other emotional events going on over the weekend for the Spaniard, and he admitted he was “very surprised” by it all.

“I raced with great champions,” he explained.

“I raced with Michael [Schumacher], I raced with Jenson Button, two or three years ago it was his last race in the same place, in Abu Dhabi, you know.

“No-one had all the things that I received this weekend so I cannot say thanks enough to everyone.”

The Spaniard went on to talk about whether he would return, and he said that he will be back for definite, just maybe not behind the wheel…

“We will come back maybe one day as a tourist and as a commentator maybe to enjoy F1 in a different way,” Alonso continued.

“Right now, I am not thinking to come back.

“That is for sure. I don’t know how I will feel next year.

His 2019 plans include finishing off the World Endurance Championship, and taking part in the Indianapolis 500.

If he was to win the latter, he would become just the second man in history to complete the Triple Crown, after Graham Hill.

“I want to fight for the Triple Crown, the Indy 500 and other iconic races,” he explained.

“Maybe Daytona, maybe other things that will come. Maybe for 2020, I feel the need to do a full calendar in something.

“Maybe that is the time to come back or maybe I enjoy so much next year that I will not come back.”