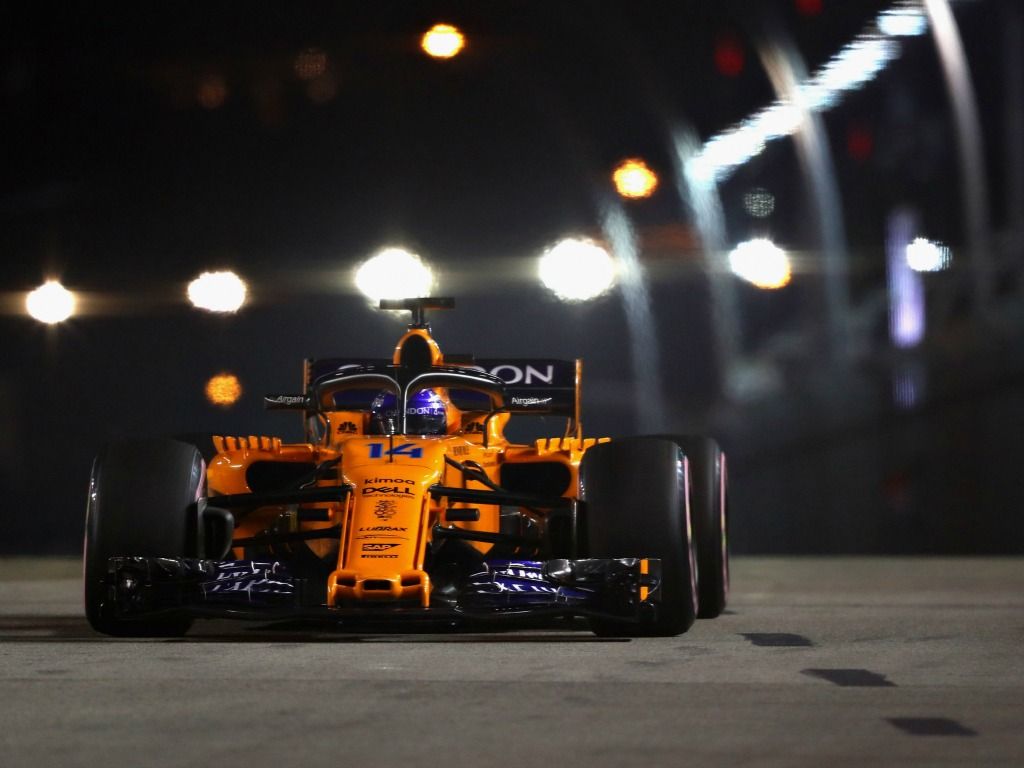 Fernando Alonso has hailed his P11 grid slot for the Singapore Grand Prix on Sunday afternoon as “perfect”.

The Spaniard narrowly failed to get out of Q2, and will start alongside his McLaren replacement for 2019, Carlos Sainz.

Despite not managing to get into the top ten shootout, the double World Champion believes he is in a better position than some of the cars in front of him.

“I wanted to start from the clean side of the track, so P11 is perfect,” Alonso said.

“I’ll have Carlos alongside, as is usual, so hopefully we’ll both move forward and score good points for us.

“We have the possibility to choose the tyres for the start, so that’s an extra help to try and pass the two or three cars that will start ahead of us.”

Had Alonso made it through to Q3, he would have had to start Sunday’s race on the hypersoft tyres.

Though it is the quickest over a single lap, it degrades much quicker than both the ultrasoft and soft tyres which are also available this weekend.

“It was important to avoid the Hypersoft for the race, but of course you always want to be in Q3,” the Spaniard continued.

“But if you’re tenth on the grid having to start with the hypersofts then you know you’re in for a difficult Sunday.

“The hypersoft gives you around 2.5s advantage in qualifying but suffers from very high degradation in the long runs and has a lot of graining.

“If you have to stop early and return to the track in traffic then your race is basically done.”

Alonso believes that he can aim for the points in his MCL33, due to the high degradation that the top ten drivers will face on the hypersofts.

“They will have to manage the degradation of the hypersofts and I’m hoping we can make much longer runs with a harder compound,” the 2005 and 2006 World Champion added.

“Nevertheless it’s going to be a very tight battle for the points, complicated.”

On the other side of the McLaren garage, it was another poor qualifying for Stoffel Vandoorne.

Fifteen qualifying sessions into the 2018 season and the Belgian is still yet to out-perform Fernando Alonso.

Vandoorne qualified in P18 for Sunday’s Singapore Grand Prix, and says that he was constantly making contact with the walls around the tight and twisting Marina Bay circuit.

“My last run on the new tyres was extremely messy from my side,” Vandoorne said.

“I touched the wall about four times I think. We should definitely have been in Q2 as that was when the track was at its best.

“It’s a shame because the pace was there to progress. I think the car is okay so that’s good.

“When you do a bit too much and you overheat the tyres, the lap-time doesn’t come towards you. It’s all about qualifying here.”

The McLaren pair will line up in P11 and P18 for Sunday’s Singapore Grand Prix.