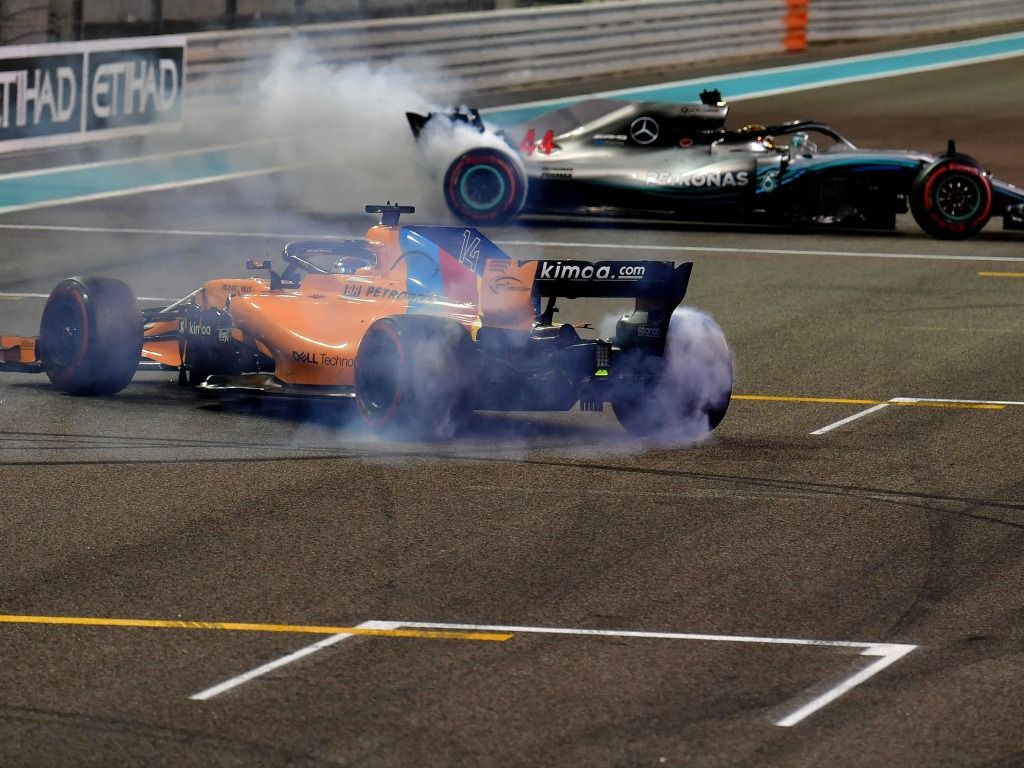 Fernando Alonso has revealed that the “magic” donut gesture from Lewis Hamilton and Sebastian Vettel had not been planned.

After the race in Abu Dhabi, possibly Alonso’s final race in Formula 1, he performed some donuts in his McLaren, in tandem with the two other World Champions.

With 11 Drivers’ titles between them, they are the three best drivers of this generation, and they put on one last show for the crowd.

Alonso said that the gesture from the pair was “magic” and he thanked them, saying he was privileged for his career.

“The whole weekend has been amazing and the in-lap was not planned,” Alonso said.

“It was a nice touch by them, so thank you Sebastian and thank you Lewis.

“They are both great champions and I feel very privileged to race with them; it was a great race to be fighting with the Haas drivers to the very end.”

Despite everything having finished on Sunday evening, the Spaniard still needs some time to let it all sink in.

“I think I need a couple of days to realize the whole weekend, because I have been very busy and I haven’t had five minutes for myself to think about it but it has been a very good weekend,” he added.

“I think in a couple of days [it will sink in].

“The race was a normal race, fighting for the tire management, the fuel saving, all these things, and fighting for points until the end, until the last lap.”

With it being his final race, a lot of the attention in the paddock was focused on the McLaren man this weekend.

With this being the case, Alonso said that he barely had time to think about the whole occasion over the course of the race weekend.

“I had really no time in the weekend,” the two-time Champion continued.

“The morning has been the busiest morning ever in a grand prix.

“I tried to sit down and check my telephone and after 30 seconds, [press officer] Silvia [Hoffer-Frangipane] was coming or someone from the team knocked on the door and I had to say hello to a new person!

“It has been very, very busy, so I think I need two or three days to check and realize all the things that I lived this weekend. It will always be in my heart.”

Once again, Alonso remains on the fence as to whether he will return, but he says that for now, Abu Dhabi was the last time we will see him in Formula 1.

“I consider this the last race,” he said.

“Who knows what the future will bring, but for now this is the last.

“I feel very happy and very privileged with all the success that I had over the years, driving for amazing teams.

“Coming from a very normal family from the north of Spain, a go-kart driver, eventually you find yourself in Formula 1 and winning championships and 17 years of magic in this sport.

Within 24 hours of his Formula 1 career coming to a close, Alonso got into the seat of Jimmie Johnson’s NASCAR vehicle, in a test in Bahrain.

The seven-time NASCAR Champion had a spin in a McLaren as well, around the Sakhir International Circuit.

After the Abu Dhabi Grand Prix on Sunday, Alonso said he was looking forward to the test.

“I think with Jimmie at the moment there is quite a relaxed environment, but tomorrow on track we will be very competitive,” the Spaniard admitted.

“I am ready to drive that NASCAR car to the limit and to have some fun.

“I love racing in America, there is no secret to that, and let’s see how this car feels and how much fun we have…”