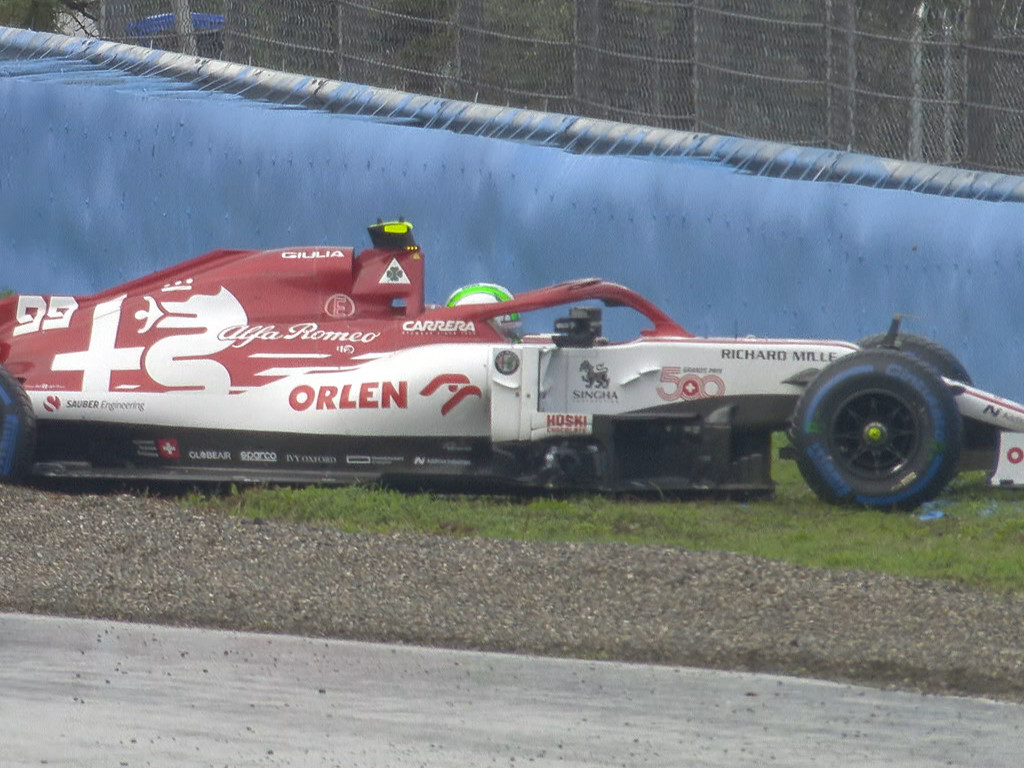 Antonio Giovinazzi and George Russell reminded us just how slippery the Istanbul Park circuit is by sliding off on their way to the grid.

The newly-laid tarmac has meant that no driver has been able to reach their full potential yet as Formula 1 returns to Turkey for the first time since 2011.

And when the rain fell on Saturday, Istanbul Park started to look more like an ice rink.

Further heavy showers fell before Sunday’s race and Giovinazzi knew about that all too well after he went sliding off into the wall on his parade lap to the grid.

The Italian was literally crawling up to Turn 3 when he lost control of his Alfa Romeo, damaging the front wing as he clipped the wall and ending up beached in the gravel.

Alfa Romeo are hopeful that they can get the C39 fixed ready for Giovinazzi to start the race after he delivered a solid qualifying performance, finishing all the way up in P10.

Also in the wars was Williams’ George Russell.

The Briton was seen trundling back into the pit lane after his parade lap with a broken front wing.

Giovinazzi crashes on the way to the grid 😱

The conditions are treacherous and the Italian takes a knock to the front wing after spinning off 💥#TurkishGP 🇹🇷 #F1 pic.twitter.com/NUXpRnNq8d

Russell will now be forced to start from the pit lane, along with his Williams team-mate Nicholas Latifi.

It’s reported though that the plan for Williams was to start both cars from the pit lane anyway so they can make setup changes.

Now Russell hits the wall in the pit lane!

He returns to the pit box in his wounded Williams#TurkishGP 🇹🇷 #F1 pic.twitter.com/eRTIDtLIN4

Also Gasly has been sent to the back of the grid after breaching the regulations on changing power unit elements.