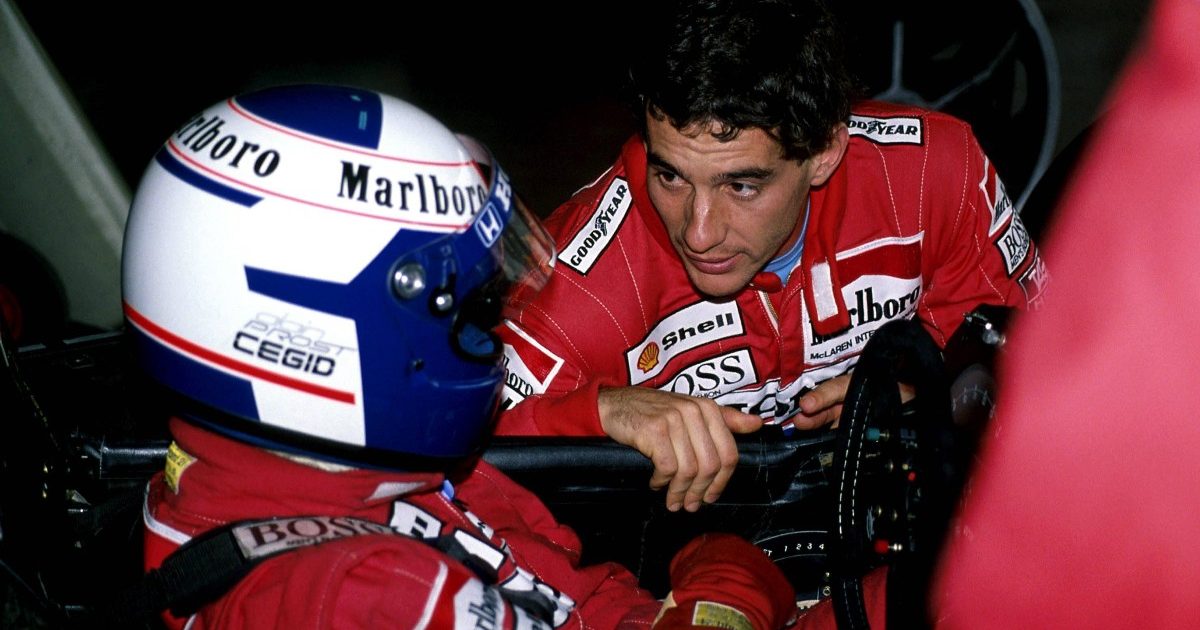 Alain Prost said that Ayrton Senna begged him to reverse his retirement, in order to maintain his own performance level.

The epic rivalry between these multiple-time World Champions will forever be remembered as one of the greatest and arguably most intense Formula 1 has seen, but when Prost decided to call time on his Formula 1 career, Senna was not ready to see him go.

The 1993 Australian Grand Prix was Prost’s final race in Formula 1, but there was an offer on the table from McLaren for 1994, which Senna was desperate for Prost to accept.

According to Prost, Senna was so laser focused on him that without his presence on the grid, he was left vulnerable.

Speaking to Nico Rosberg during an interview on the 2016 World Champion’s YouTube channel, Prost said: “Ayrton focused on our challenge by putting 110% into it.

“His greatest motivation was almost exclusively to beat me, even if I wasn’t so focused on him. For this reason, after I retired in ’93, Senna was never the same again. His armour which he had built up in our rivalry, was gone and he looked fragile.

“For 1994 I had received an offer from McLaren, which had switched to Peugeot as engine supplier. Two days after the last GP of the 1993 season, Senna called me begging me to accept: ‘Alain, you have to stay in F1. Nobody motivates me among the other drivers like you do’. It was really sensational.”

Action from the 1988 French Grand Prix at Paul Ricard.

McLaren-Honda teammates Ayrton Senna & Alain Prost battle for the lead. Prost would go on to achieve a home victory.

Prost and Senna were McLaren team-mates for the 1988 and 1989 seasons, with McLaren winning the Constructors’ title in both. Senna would be crowned Drivers’ Champion in 1988, with that honour going to Prost the following season.

Prost definitely felt though that “everyone” preferred Senna, likening the situation to when Charles Leclerc joined Ferrari in 2019, whittling away Sebastian Vettel’s number one status who then left the team at the end of the following season.

“I don’t regret to have chosen him as team-mate,” Prost reflected.

“I thought about the good of the team, but already in the first season I sensed a preference for Ayrton on the part of everyone.

“The public was divided between Senna and me and I was seen as the bad guy. Besides, he was the young guy who was advancing, while I was the older driver.

“A bit like what happened in Ferrari with Leclerc and Vettel.”

From bitter rivals, Senna and Prost would ultimately become friends before Senna tragically lost his life at Imola in 1994.

And to this day Prost says his life remains linked to Senna, citing the fact that Brazil is now like his “second home” rather than the hostile territory it was, and so Prost says perhaps the “most beautiful legacy” of their story is the fact that these divisions are now gone.

“My life is linked to Ayrton,” said Prost.

“Today Brazil is like my second home, I have a lot of followers from that country on social media. I’m also still in touch with Senna’s sister, Viviane.

“It’s as if the division that existed during our rivalry has disappeared and the human side has taken over. Perhaps the most beautiful legacy of an exciting story.”