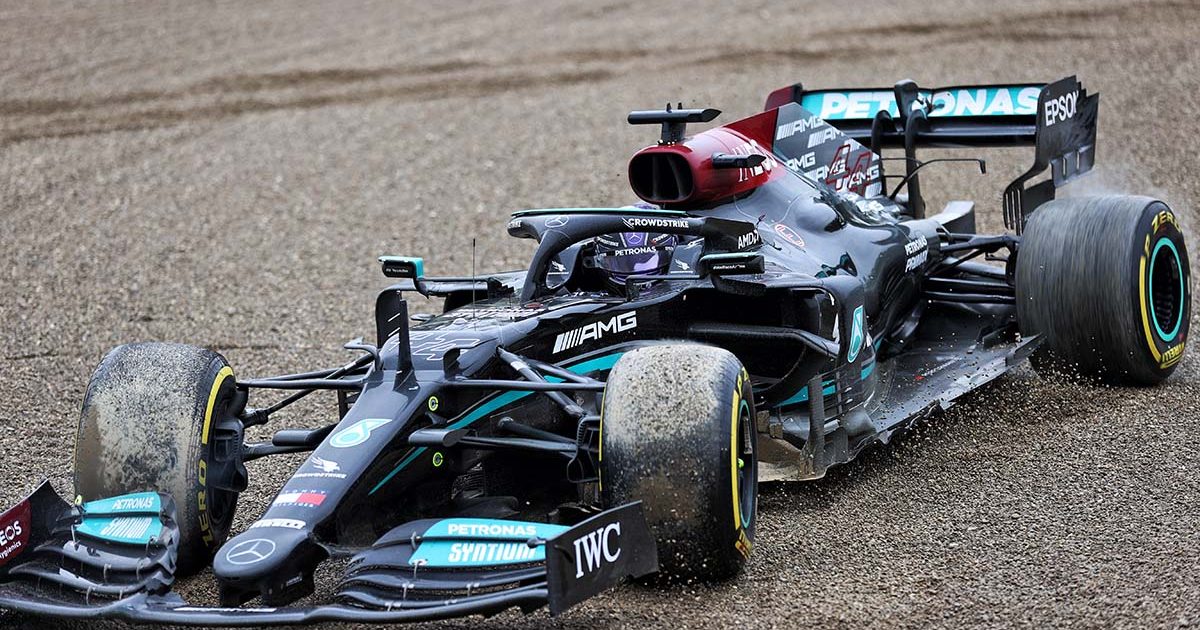 Sir Lewis Hamilton was chasing Max Verstappen through the traffic for P1 in Imola, but a rare error left him sliding into the gravel.

Early rain had left parts of the Imola circuit very wet, while at other points the tarmac was almost bone dry.

But as the race progressed and the clouds cleared, it was leader Verstappen who blinked first to fit the slick tyres, with Hamilton following a lap later.

The gap between the pair had swayed between two and four seconds as they picked their way through the traffic, but at this point came an uncharacteristic error from Hamilton who slid wide and into the gravel trap as he tried to lap George Russell at Tosa.

After backing up the W12 slightly, Hamilton misjudged the angle to the wall and so while trying to correct his Mercedes, hit the barriers.

His next attempt to get out of this sticky situation was more successful as he reversed through the gravel trap and back onto the circuit, though the price he had paid for the errors was plenty of lost time and a broken front wing.

However, his Mercedes colleagues Russell and Valtteri Bottas were then involved in a nasty collision as the pair collided on the approach to Tamburello and ended up in the gravel.

Thankfully the pair were unhurt as Russell emerged from the wrecked FW43B to give Bottas a finger and a slap on the helmet, but with the race then red flagged, it was back to the pit lane for Hamilton and the remaining drivers.

Lewis managed to get back to the pits and fit a new front wing. Big second half ahead of him to make anything of his Sunday after his off. #ExperienceF1 #ImolaGP 🇮🇹 pic.twitter.com/pHlOjAZwim

Hamilton found himself P9 in the order under the red flag period, but nonetheless was seen crouched in the pit lane with his head in his hands.

With Verstappen still in the lead, the Briton knew he had a huge challenge ahead to keep the Red Bull man away from top spot in the Drivers’ Championship.

Hamilton cleared Lance Stroll, Daniel Ricciardo and the Ferraris of Carlos Sainz and Charles Leclerc once the race resumed, and despite a valiant effort, Lando Norris too would fall to Hamilton who recovered to finish P2.