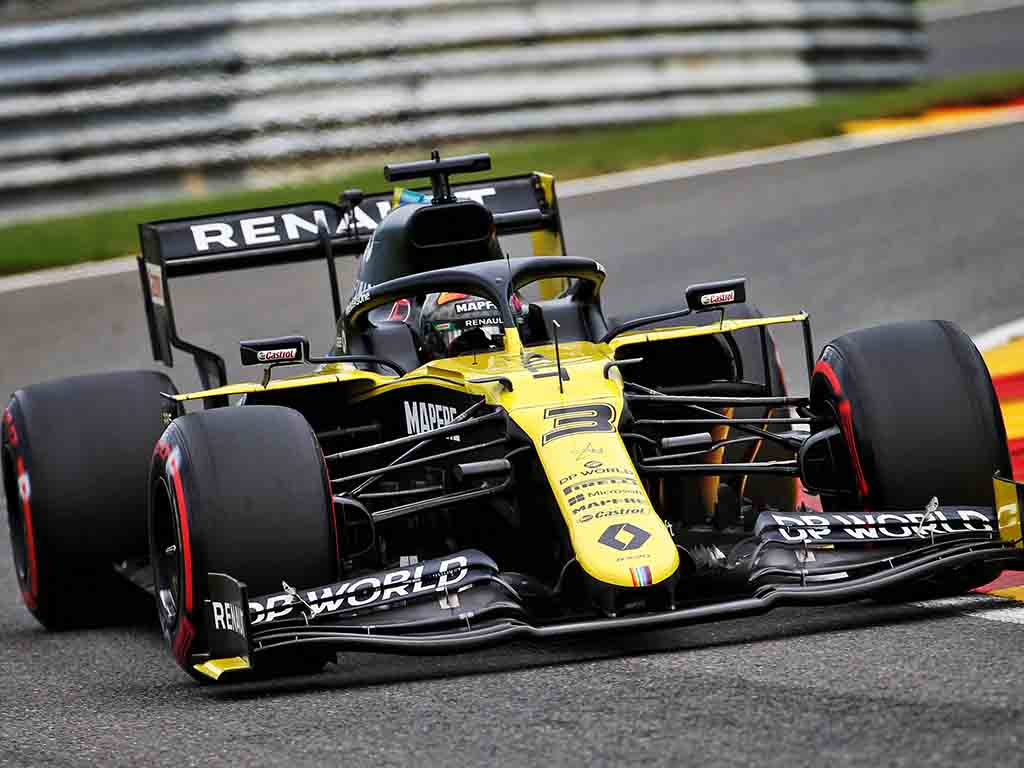 Daniel Ricciardo was a surprise entry into the top three after second practice ahead of Sunday’s Belgian Grand Prix.

The Renault driver was the meat in the middle of a Red Bull/Mercedes sandwich as Max Verstappen, Ricciardo and Lewis Hamilton were all separated by less than a tenth following their qualifying simulation runs.

But, it would prove to be a bittersweet session for Ricciardo after he was told to stop the car during his race sim. He came to a grinding halt on the Kemmel Straight with 20 minutes of the session remaining.

Alex Albon and Sergio Perez lodged themselves into P4 and P5 respectively with birthday boy Valtteri Bottas only sixth quickest.

There were drops of rain in between the two practice sessions but the track was dry as FP2 got underway on Friday afternoon.

It was a gentle start to proceedings with just eight timed laps on the board in the first 20 minutes of the session, but there was an early incident for Norris after he reported a loss of power on his out-lap. Luckily for him, it was just a calibration issue that was fixed quickly.

As he nursed his car backed to the pits, the 17 others (still no sign of the Haas drivers after their PU problems in FP1) cracked on with their FP2 programmes.

Verstappen got the better of the early exchanges with Mercedes duo after he posted a 1:44.354 on the medium tyres. Hamilton, in P2, was 0.298 seconds down and Bottas was in P3, just 0.006s slower than his team-mate.

Also three tenths down on Verstappen were the Racing Points of Lance Stroll and Sergio Perez.

Then, it was time to strap on the soft tyres for the qualifying simulations.

Bottas was the first to give it a crack but his 1:44.162 was not the most convincing of markers. In fact, it last all of five seconds as the new P1 time as Hamilton found an extra three tenths on the Finn.

Alex Albon and Sergio Perez both pumped in eye-catching times to split the Mercedes cars, but even more eye-catching was Daniel Ricciardo managing to quicker than Hamilton.

The Aussie’s old team-mate Verstappen went quickest of all again soon after, but the new top three of Verstappen, Ricciardo and Hamilton were separated by less than a tenth.

Eagle-eyed Red Bull boss Christian Horner reckoned Hamilton “had another three tenths in hand” after what he felt was a scruffy lap.

Elsewhere, Ferrari continued to be bogged down towards the back of the pecking order alongside their customers Haas as Romain Grosjean and Kevin Magnussen finally re-emerged on track.

Ricciardo’s lovely afternoon turned into a not so lovely one during the race simulations as he was forced to stop with a loss of hydraulic pressure.

There was also a nervy moment for Hamilton as he came out from the garage on his cold hard tyres and almost spilled right across the track from the pit lane exit.

A pesky red flag then briefly interrupted the race sim programmes as a loose advertising board had made its way onto the exit of  La Source.