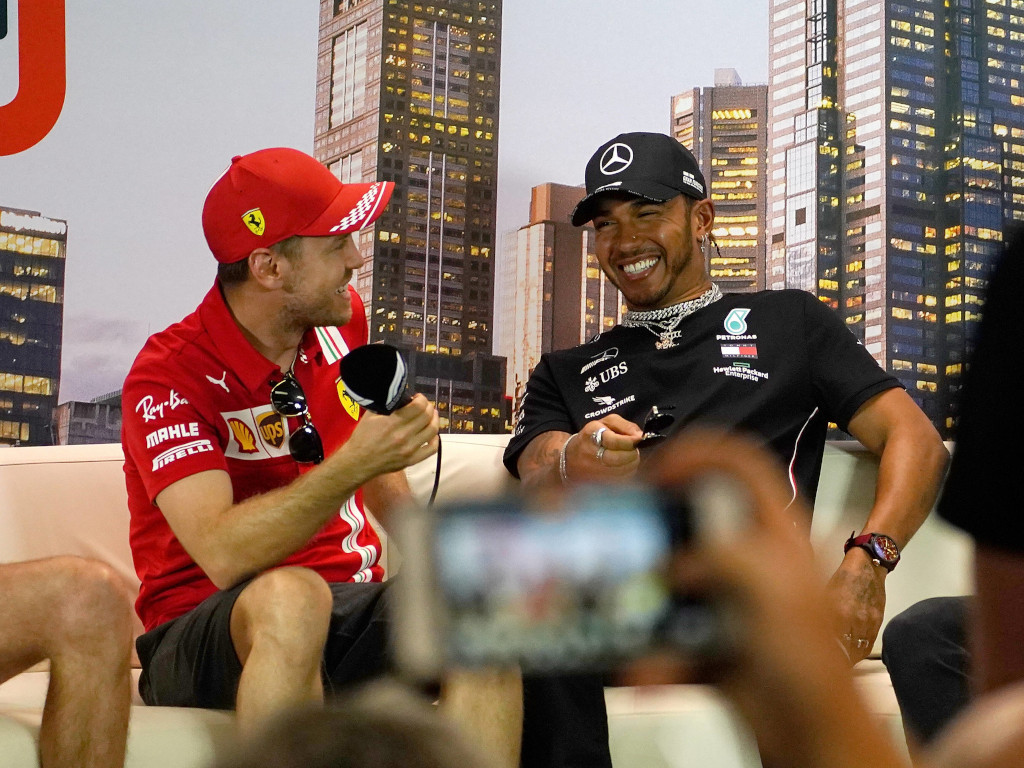 Bernie Ecclestone believes Lewis Hamilton should stick with Mercedes rather than sign for Ferrari when his current contract runs out at the end of this season.

The 35-year-old Mercedes driver can have his pick of the Formula One teams but Ecclestone has warned him off choosing the Italian manufacturer.

Hamilton had been due to start his bid for a seventh F1 world title in Australia this weekend before the first race of the season was called off due to the coronavirus pandemic.

Ecclestone believes Hamilton would be better served staying with what he knows at Mercedes rather than move to Ferrari if he decides to continue his F1 career.

Former F1 supremo Ecclestone told the Daily Mail: “If I were Lewis I would stay with Mercedes.

“He is comfortable there. He is in charge. he’s got the guy who turns the lights on and off supporting him (team principal Toto Wolff).

“It wouldn’t work at Ferrari for him.

“They are Italians. He would have to really learn the language so he’d know what they were saying behind his back, for a start.

“The problem with all the Italians, they don’t want a fight, don’t want an argument with anyone.

“Instead of saying to someone who is doing a bad job, ‘Sort yourself out or I’ll sort you out — please yourself, but I want results,’ they say, ‘Let’s have dinner so we can talk about it. Be friends’.

“If I were a team boss I’d sign Max [Verstappen]. He’s quick and easy to deal with. If I had Lewis I’d just tell him what time the next race starts and say be there for then. Apart from that he could do whatever he wants.

“I’d cut his pay and let him do his own sponsorship, anything. Mercedes try to rein him in a bit. I’d give him total freedom.”

Hamilton will look to tie Michael Schumacher’s record of seven World Championships once the 2020 season does get underway, but Ecclestone doesn’t think he should be concerned about an eighth.

“There is no need for him to worry about winning one more championship than Schumacher,” he said.

“If he wants to stop racing, he should not carry on just for that reason. He should carry on because he wants to drive.”

Schumacher’s seven titles puts him on a level of his own when it comes to success in F1, and even if Hamilton joined him there, Ecclestone doesn’t believe either of them are the best Formula 1 has seen.

Asked for the greatest F1 driver of all time in his mind, Ecclestone said: “Alain Prost.

“He never got a lot of support from the team. They didn’t get all that [much] help from the pit wall, either.

“The lights went out and he was on his own. He had to look after the tyres on his own, the brakes too, and he was bloody quick. He nearly won two more championships. That would have been six but the figures are immaterial.

“I’d also say Nelson [Piquet], who did well in a car that was OK. Stirling [Moss] you’d have to say yes to the top four. And [Juan Manuel] Fangio — he got the job done.

“Lewis is very good. Top four or five, or whatever, but it is hard to say this guy is better than so and so. Lewis has the best equipment and best team. The best everything.”

Hamilton has claimed the Drivers’ Championship in five of the past six seasons, while Mercedes are on a run of six consecutive Drivers’ and Constructors’ titles.

Ferrari have been their closest challenger over those years, but have regularly shot themselves in the foot during the title fights.

Ecclestone believes team principal Mattia Binotto is a major issue, saying he is just an “engineer” and not a “leader”.

“He’s an engineer, they need someone in there who can make people understand that when you say something it happens. Not maybe. Or a discussion.

“I would have got Flavio Briatore to run Ferrari. Flavio would do what he always did with Benetton and Renault: he’d steal the best people from other teams. The problem is that in the end Flavio would have let people think Ferrari belonged to him.”