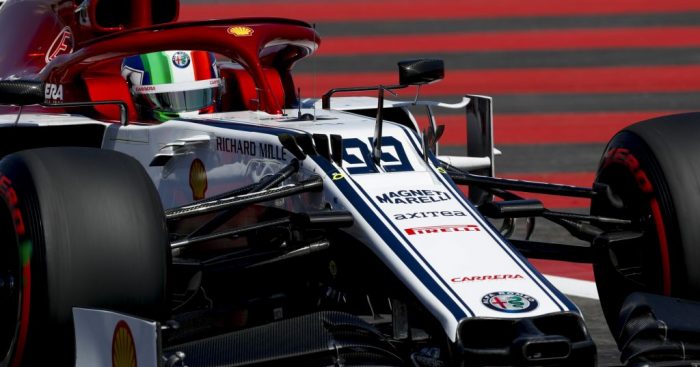 Alfa Romeo returned to the points in France, and team principal Fred Vasseur says a “big update” is coming for Silverstone.

The team hadn’t scored any points since Baku, but that changed at the French GP when Kimi Raikkonen matched his best finish of the season with P7.

Raikkonen’s performance lifted the team back above Toro Rosso and Haas in the Constructors’ Championship, and while delighted with the result, Vasseur insisted that Alfa need to remain calm and focused with the updates on their way.

“Sometimes Sunday evening you have the feeling that you understand something, the next Friday, you are nowhere,” he told Motorsport.com.

“We have to stay calm, and take it a little bit easy, and have a good analysis. I’m not sure that we sorted out all the issues and the questions we have with the tyres so far.

Vasseur insisted that the result at the Circuit Paul Ricard was a welcome relief for the team as they finally returned to the points.

“It’s a great feeling for the team, because you’re also pushing hard when you’re not in the points,” he explained.

“It was a bit frustrating, because sometimes the pace was there and we did mistakes. So to be back is a great feeling, and a good reward for the job done.

“Kimi did a very strong race, it was not easy between the two Renaults from the first lap to the last corner. The pace was there, Gasly was slower than us in the group, and we were catching up even Sainz and Norris at the end. It was nice to be back in the points.”

Antonio 📣"Going into the Spielberg weekend I would like to concentrate on the positives of the previous race. The pace in qualifying was great and it was good to feel the fighting spirit within the team to come back and to gain performance" #AustrianGP pic.twitter.com/HKJgG61iV3

Antonio Giovinazzi put in a solid qualifying session, finishing ahead of Raikkonen again, but ironically this compromised his race by forcing him to start on the softs after setting his fastest Q2 time on them.

He would finish P16, but Vasseur was encouraged by the Italian’s ability to make it into Q3.

“To start with the soft was difficult, and then he was out of the sequence. But then we have to keep in mind the positive point that he was in Q3,” said Vasseur.

“Picking up the pace takes time, but if he is able to do a good job in qualifying, the next step will be the rest.

“It was probably the worst situation to P9 or P10 with the softs. It won’t be always like this, if he can be in Q3 with the same tyres as the other ones, it will be good.”