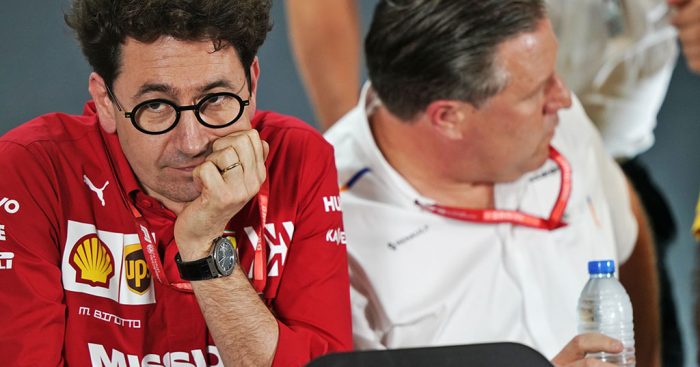 Ferrari boss Mattia Binotto remained tight-lipped on the issue of Sebastian Vettel and Charles Leclerc after their clash in Brazil.

A collision between the Ferrari duo at Interlagos provided the latest chapter in their ongoing rivalry, which resulted in both drivers having to retire from the race.

Binotto, facing the press in between practice sessions, stressed that the issue would remain an internal one and he would not be dishing out any snippets of what came from their latest meeting back at Maranello.

“There are no answers here,” Binotto said in the Friday’s FIA press conference in Abu Dhabi.

“It’s something we discuss internally. They are both very good drivers, they know exactly what to do. It’s unfortunate what happened.”

“Is there one driver more to blame than the other? I think it’s not important. Maybe that time it could have been Seb, maybe next time it could be Charles.

“They are two drivers, fighting, and they can make mistakes. What’s important is to know the next time, it’s not happening again.

“There’s not much to discuss. It’s been between us, something we discussed at our factory, and I’m happy to keep it between us.”

Binotto then reiterated that his main focus is to ensure that damaging incidents between the pair do not happen again.

“What is more important is to understand what’s triggering it,” he said.

“That is the only way to make sure that in the future it’s not happening again. And that’s obviously what we discussed.”