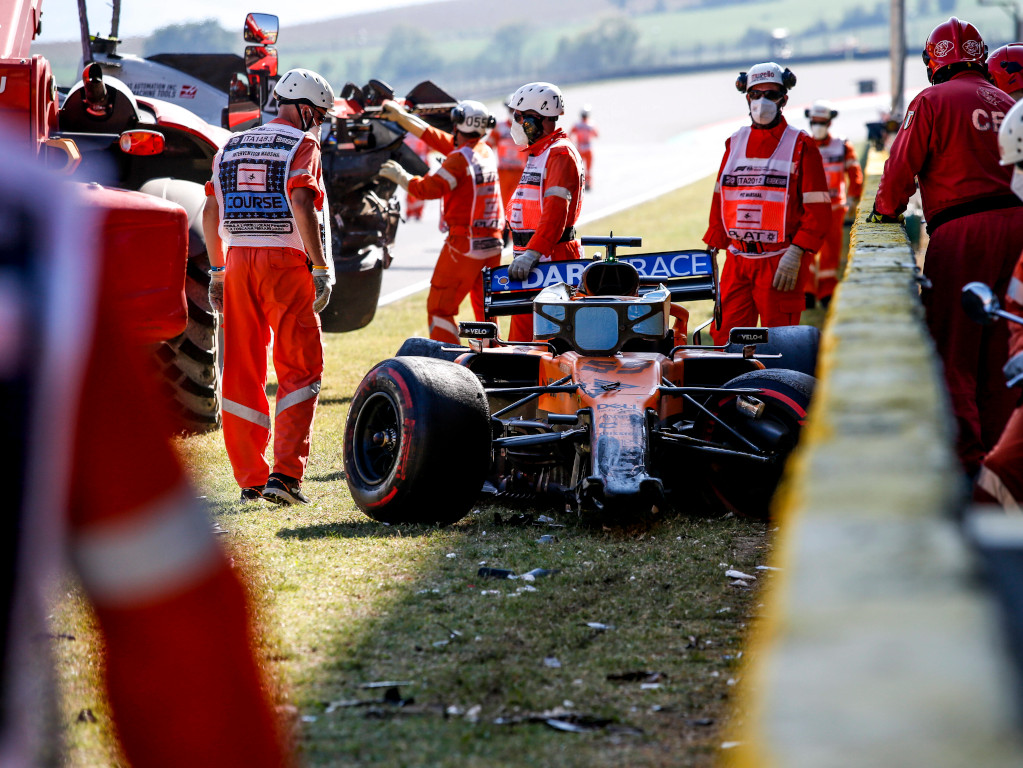 Carlos Sainz is planning a “brainstorm” session with his fellow F1 drivers over the Mugello crash he describes as the “second biggest” of his career.

The Spaniard was among four rivals who exited the Tuscan Grand Prix as a direct result of a melee upon the Safety Car restart along the Mugello pits straight.

The others whose races were ended by the incident were Kevin Magnussen, Antonio Giovinazzi and Nicholas Latifi, although the race stewards apportioned no individual blame and merely issued warnings to 12 drivers.

It was believed to have been caused by certain drivers anticipating the restart and speeding up before race leader Valtteri Bottas had accelerated himself.

McLaren driver Sainz is eager to engage in talks before FP1 of the Russian Grand Prix at Sochi in order to avert any potential repeat of what he considered to be a “huge” crash.

“I think we need to take some lessons and learn from it,” said the 26-year-old during his press conference on the eve of the race weekend.

“I think we as drivers didn’t make our lives easy, some people second-guessing the restart and making it very complicated for the people at the back.

“We will definitely discuss that tomorrow. I think we need to analyse together with the FIA what we can do better because the crash was huge – it could have been a lot worse I think, especially when I watched it back.

“It could have been much worse if the cars I took with me, or the cars that were in that concertina effect, had been at different angles when you take them.

“We were lucky nothing happened, but looking at the accident again it was a serious accident and could have been much worse.”

However, Sainz did not want to prejudge the outcome of any such discussions.

“How are we going to avoid it in the future? I think it needs to be discussed privately,” he added. “But I think we need to have a proper look all together, bring all our thoughts and brainstorm a bit on how we can avoid it happening next time.

“I want to hear everyone’s opinion before taking some conclusions. I think we just need to sit down clearly, get everyone’s opinion and see what we can do better. I don’t think it’s right to criticise drivers or the FIA publicly.”

Sainz denied it had been the heaviest crash in which he has been involved.

“I’m actually in the place of the biggest accident of my career – here in Russia in 2015,” he recalled. “Thanks for reminding me!

“Mugello was my second [biggest] and it was quite a big shock – finding cars stopped in front of you at 260+km/h was not good.

“But I think Russia was bigger – although Mugello makes it to the podium, definitely.”