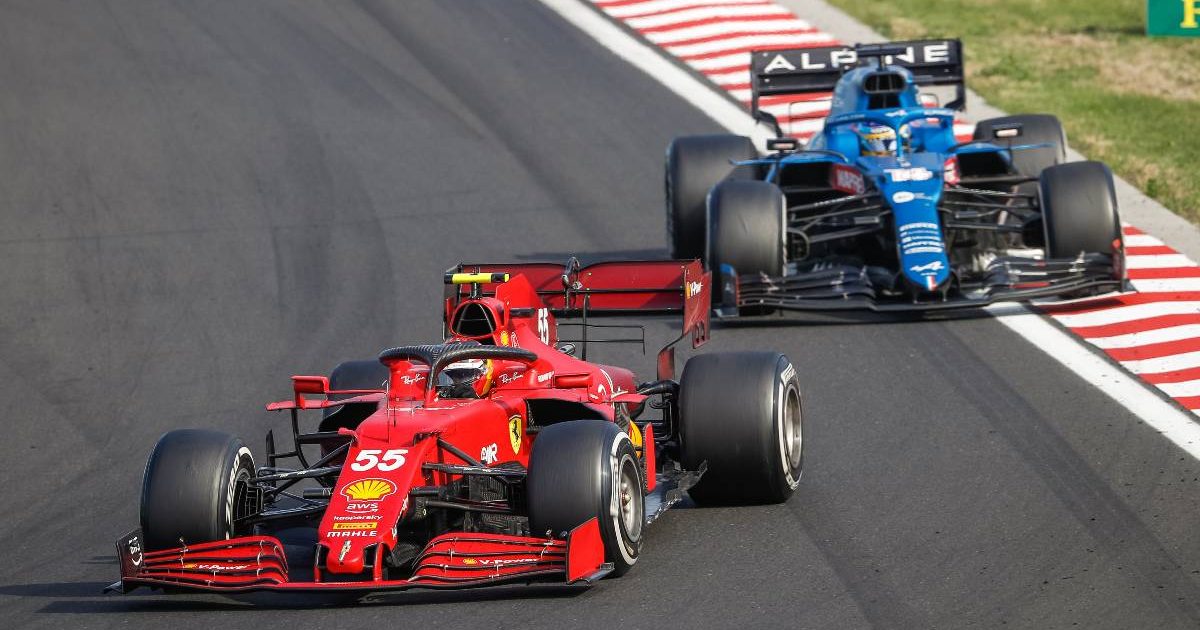 Carlos Sainz says he considered giving Fernando Alonso a DRS boost in Hungary – to protect his own podium prospects from Lewis Hamilton.

Entering the closing stages of a Hungarian Grand Prix turned upside down after a pre-race rain shower, the Spanish duo were running third and fourth behind Esteban Ocon and Sebastian Vettel who had the victory fight between them.

But as he closed up to those ahead of him with his Mercedes on fresh medium tyres, Hamilton had not given up on making the podium at least – only to find Alonso a particularly tough nut to crack.

The Alpine driver was doing a terrific job of holding up the reigning World Champion – thereby helping his team-mate Ocon avoid a late Hamilton challenge too – and Sainz thought about giving Alonso some assistance that would benefit both compatriots.

Asked if he had pondered whether to allow Alonso within one-second range of him to trigger DRS, which was activated on Hamilton’s car, the Ferrari driver told reporters: “Yes, of course, I did consider it. Obviously we are racers and we consider every kind of scenario to stay ahead.

“What you guys probably don’t know is that I was having to do a lot of fuel-saving. I was also quite weak in the last corner because I was struggling a bit with the tyres towards the end.

“And the combination of having to fuel-save into Turn 1 and being weak in the last corner meant that in the end, I took the decision not to risk my position with Fernando.

“We will never know if I took the right choice. But thinking about it at the time, my feeling was to play safe and try to pull away from Fernando to make sure I tried to do all the fuel-saving and Lewis would take more time to catch me.”

Eventually, when Alonso locked up into Turn 1, Hamilton did get past and then made comparatively short work of Sainz to put himself in third position.

The Briton then set off in pursuit of Ocon and Vettel, but had run out of laps and crossed the finishing line 2.736sec behind the winner.

Hamilton then moved up into second when Vettel was disqualified for a fuel infringement – pending an appeal from Aston Martin – which meant Sainz did take third place after all.

It means that of Sainz’s four top-three finishes in Formula 1, exactly half of them have come without him actually standing on the podium – his 2019 Brazilian Grand Prix third position for McLaren came when Hamilton was given a time penalty after the race for a collision with Alex Albon.