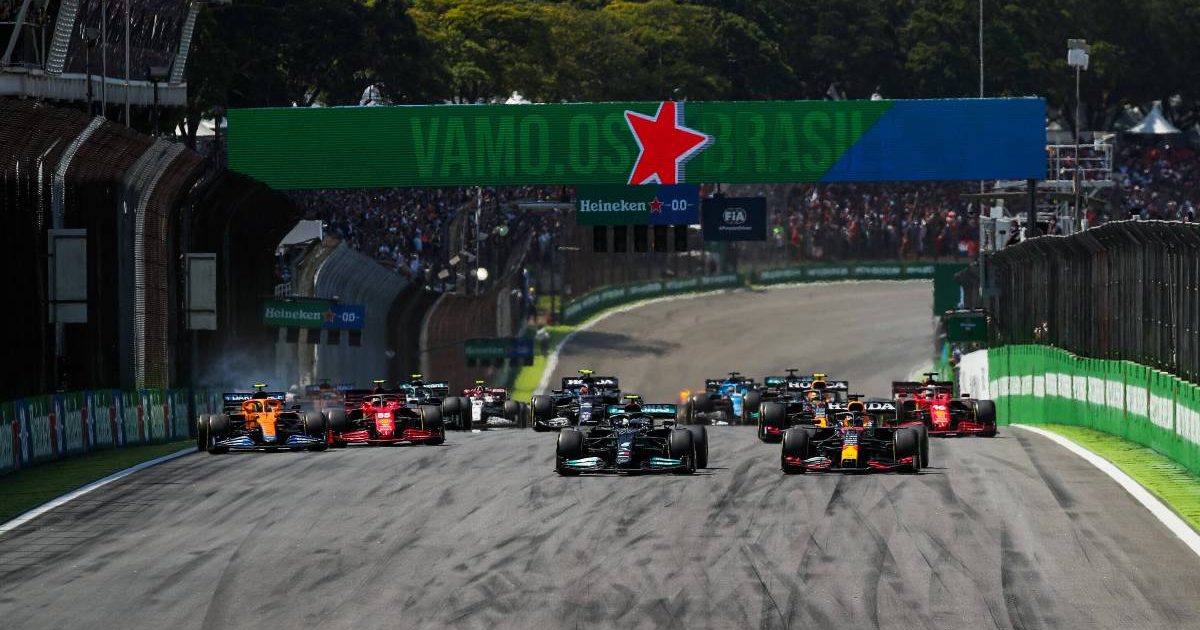 Carlos Sainz felt that Lando Norris had tried to take Turn 1 too early at Interlagos, resulting in their first-lap collision.

McLaren’s Norris got a good launch at the Sao Paulo GP start, spotting an opening around the outside of P3 starter Sainz.

But turning back in to negotiate the first corner he would clip Sainz’s Ferrari, resulting in a puncture which dropped Norris to last. From there he recovered to P10 to claim a single point.

If Sainz was at fault in any way for the crash then he is sorry, but the Spaniard does not believe he was.

“To be honest I need to look into it because it’s a very fine line between who turns into who,” he told Sky F1.

“Obviously the corner goes left and I was holding the inside but I don’t think I deliberately did anything against him, if anything I felt like he turned in a bit early into Turn 1 and we tangled.

“But racing incident, sorry to him if I did something wrong, but to be honest I don’t think I did.”

Norris too had not had the chance to review the footage, but claimed it was a frustrating day for him where he had hoped for better than P10.

“I haven’t seen it so I can’t comment, I need to look at it myself and see,” Norris stated.

“But I was still the guy in the car, whether or not it was my fault I will see in a bit, but obviously it put us out of the race pretty much, still recovered well to get one point and one point is more than nothing, but we could have had a much better day today. So frustrating.”

Ultimately though Norris saw a gap and went for it, something he will not apologise for, also hinting that perhaps Sainz could have left him more room on the outside.

“I don’t know what else I could have done, it’s impossible to see, you have to look forward a lot of the time,” said Norris.

“I had a much better start so I had to go to the right, he squeezed me and whether he could have given me a little bit more room or something, not because he’s nice, but just because we are racing and at some point I’ve got to come back on, my two wheels are off but I’m still on the track.

“I went for it because I had a chance to be ahead of the Ferraris, they’ve had better pace all weekend, so if I wanted to go for it I’m not going to just lift off and wave him back past.

“Frustrating but there was a gap and I went for it, so I can’t apologise for that part of it, maybe the bit after I will have to do and see.”

Sainz would cross the line P6, one place behind team-mate Charles Leclerc, with that haul of 18 points strengthening Ferrari’s grip on P3 in the Constructors’ Championship.

The Scuderia now hold an advantage of 31.5 points over rivals McLaren.

But having claimed an impressive P3 on the grid through sprint qualifying, Sainz was disappointed to see his pace slip away come the Grand Prix.

“It was all done at the start, I lost the position to the cars I was battling with because the top four were just too quick,” Sainz reflected.

“It’s very strange because I think I did the same start as yesterday, same procedure, but today for some reason I don’t understand we triggered a lot of wheelspin and we need to analyse what happened, if there was something strange with the clutch or the tyre because it cost me the top five finish that I was looking for today.

“Even though these last two weekends I’ve been the quicker midfield car and very strong, just the two starts in Mexico and of course here have cost me top five.”