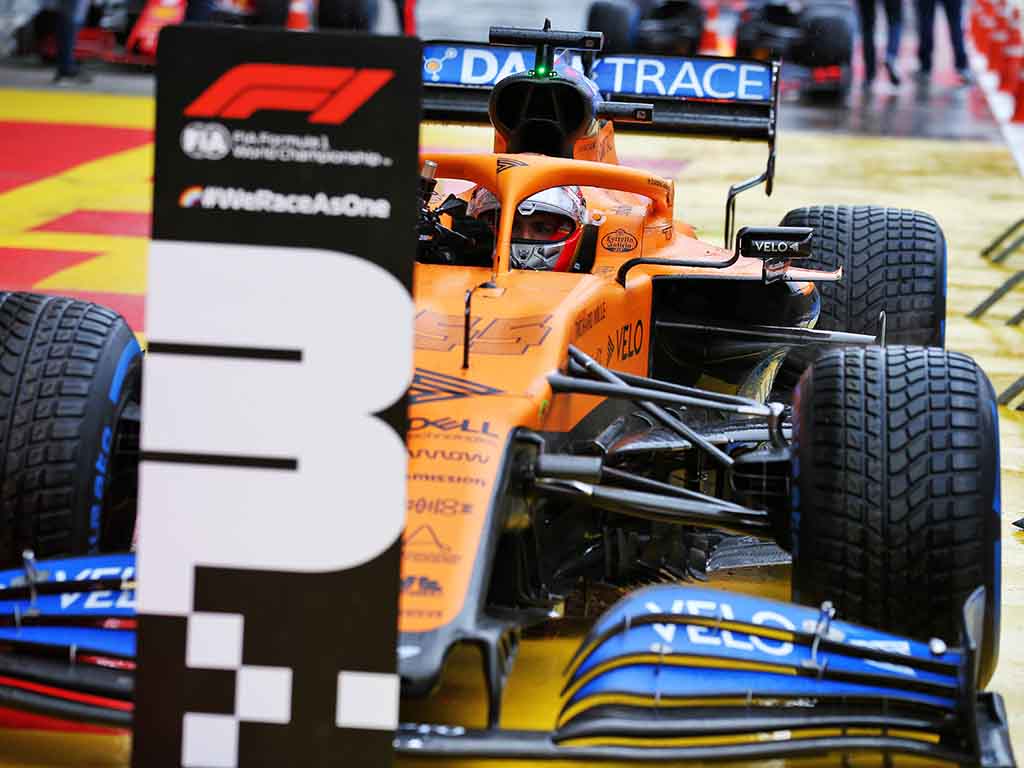 Carlos Sainz admits that qualifying for the Styrian GP was “stressful” but he is over the moon to be starting from P3.

Lewis Hamilton was in a class of his own, taking pole by over 1.2s at the very wet Red Bull Ring, but Sainz himself was earning plenty of plaudits after placing his McLaren in P3 on the grid for Sunday.

His team-mate Lando Norris scored his first podium in F1 last week at the same venue, and Sainz is delighted to be starting from that P3 spot, an new career-best for the Spaniard.

Although he described qualifying as being “very stressful”.

“It’s obviously a very happy and a very good day for me,” Sainz told the F1 website.

“I’m quite pleased that my best qualifying of the year came in these conditions because I love driving in the wet and I’ve always enjoyed myself a lot.

“Today, I did enjoy myself, but I must say it was quite stressful – it was a very stressful qualifying session. It would be good for you to see what we are going through in a F1 car towards the end of Q3, with the amount of standing water, with aquaplaning, not seeing anything, and just keeping your foot flat, trusting that the thing is going to grip and putting a lap together towards the end and risking everything.

“I’m very happy, it was very stressful but at the same time, I’m really looking forward to tomorrow for my best starting position.”

Sainz has his eyes on the Racing Points and the Ferraris who McLaren see as their main rivals, even though they underperformed in qualifying with Lance Stroll finishing P13 and Sergio Perez P17, whilst Charles Leclerc missed out on Q3.

Leclerc has since been demoted to P14 thanks to a three-place grid penalty for impeding Daniil Kvyat, promoting Stroll to P12.

He also expects early pressure from Mercedes’ Valtteri Bottas with whom he will share the second row on Sunday.

“The car on race trim was better than in Barcelona [testing],” he said.

“We are confident about tomorrow but again at the same time on Friday we saw the race pace of Ferraris and the Racing Points.

“I actually don’t know where they are starting. If it’s far back that’s good but I will have Valtteri [Bottas] behind so it will be a tough first few laps but I hopefully can settle into my own pace.”