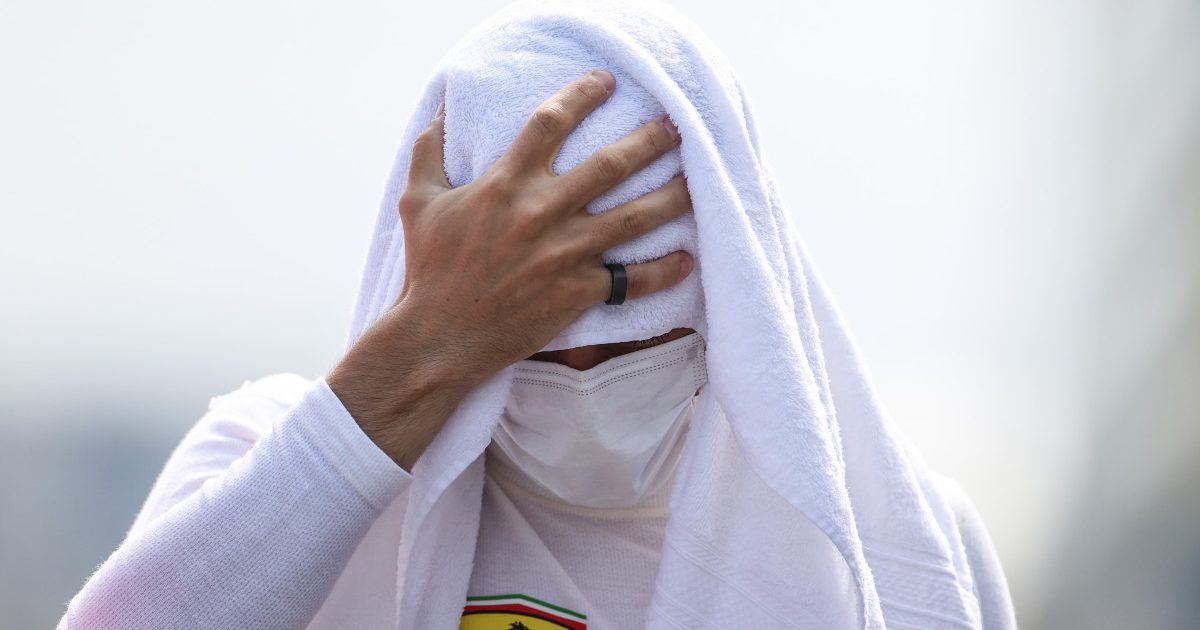 Charles Leclerc was one of the drivers forced to avoid debris on the track in Baku, and his Azerbaijan Grand Prix went backwards from there.

The Ferrari driver made it back-to-back pole positions by topping qualifying in Baku and after actually being able to take the start this time, he retained P1 off the line.

For the opening couple of laps Leclerc kept Lewis Hamilton and Max Verstappen at bay, but a piece of debris on the track then spooked the leaders into some corner-cutting.

And while Leclerc said this was not the reason why he ultimately finished P4, it was the debris which caused him to fall back into the clutches of Hamilton, Verstappen and Sergio Perez.

“That wasn’t great, I had no idea what that was,” he told reporters.

“But obviously I saw the slippery track in Turn 15, then I got quite surprised with this thing there, so I had to go out [of bounds], then I slowed down not to gain time.

“And unfortunately that is where it started to slip away for us because we got overtaken by Lewis and then it was a bit more difficult in dirty air.

Although Leclerc was able to keep within decent range of both of the Red Bulls and Hamilton after the overtakes, he nonetheless expected this to be a fight he could not win.

Instead, Leclerc was much more interested in the Aston Martins, with Sebastian Vettel taking a stunning P2 finish to give the team their first podium in Formula 1.

“I really enjoyed the last part, but the first part of the race wasn’t great,” he explained.

“Let’s say, as expected, it wasn’t a disappointment, we knew the Red Bulls and Mercedes had quite a bit more pace than us on the long runs.

“So I tried not to fight them too much, tried to focus on my own race, but I think the two big surprises of today was the two Aston Martins which were flying.

“This we need to understand because they did something right today.”

There was a shot at the podium available to Leclerc as he tried to deny Pierre Gasly at the race restart with a few laps remaining, but the Frenchman got his elbows out until the finishing line to take a second career podium.

Leclerc, though, did not agree with the suggestion he had attacked Gasly too early.

“No, honestly I saw a gap and I tried the overtake, but in the end I didn’t manage to do it,” he told Sky Italia of that battle with Gasly. “I didn’t want to take many risks as well, even if I took quite a lot of them looking at the last two laps.

“As I said at the first race, we don’t have to forget we are fighting against McLaren. Above all there were many points [up for grabs], we were ahead. I saw two opportunities, I tried, it did not work out. But it’s like that, I think I handled it quite well.”

Leclerc’s team-mate Carlos Sainz was also looking good for a solid points haul until his trip into the escape road which saw him tumble down the order. Sainz recovered though to finish P8.

That being said, he was left frustrated with his struggles to work around the cold tyres, while also admitting a lack of feeling for the brakes on his Ferrari.

“It hasn’t been the greatest of days to be honest,” said the Spaniard.

“Every time I had a cold tyre on the car, at the start, after a pit stop or in the last restart or the Safety Car, I was always struggling with front locking, the feeling of the brakes with the front tyres.

“And today it has cost me, it cost me a mistake, a couple of positions at some of the starts, and in the end it means that the end result of the weekend is not as good as it should be.

“But it gives me an opportunity to focus on something and trying to improve something which is the feeling with the car, and the front tyres and the brakes in those first laps when the tyres are cold.”