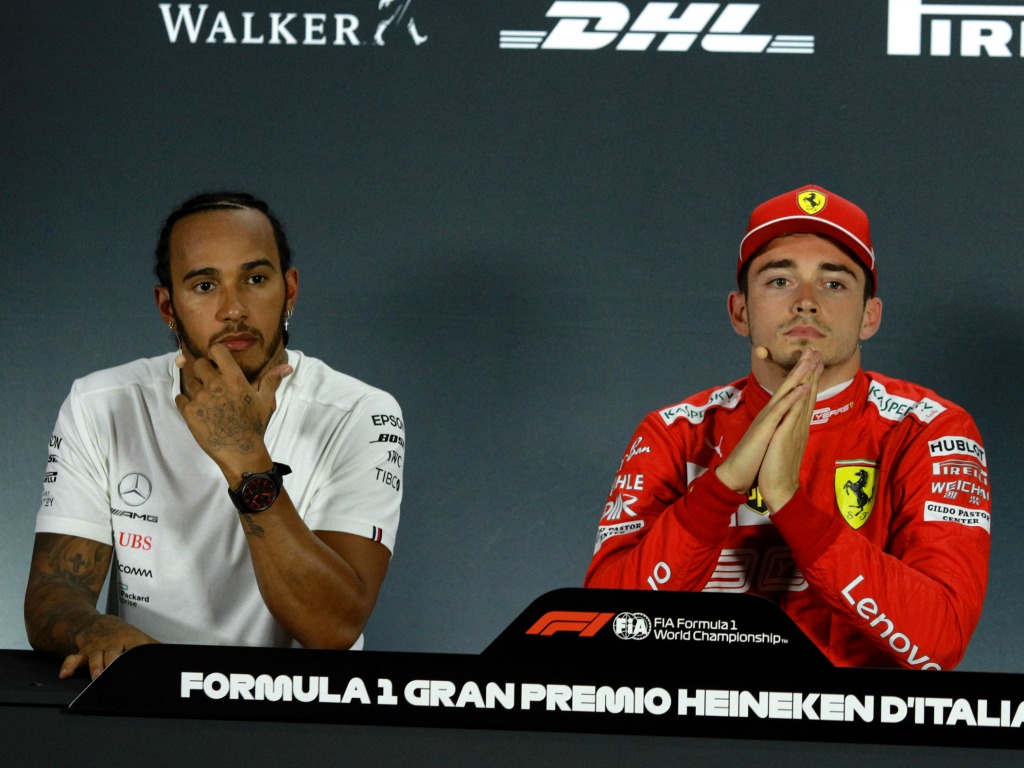 Charles Leclerc has denied Ferrari tried to intentionally sabotage Q3 in Italy following a suggestion made by Lewis Hamilton in the paddock.

Leclerc claimed pole position in farcical circumstances which made a mockery of Monza being called the so-called ‘Temple of Speed’.

All running drivers bar Carlos Sainz failed to start their final Q3 lap before the chequered flag waved after a embarrassing display of tactics were deployed by the field to try and get optimal track position via a tow.

Hamilton, who was second behind Leclerc amongst all the mess, reckons Ferrari played their part in the shambles to ensure Leclerc kept held of his position.

But Leclerc has denied that was the case.

“It was definitely not intentional from our side,” Leclerc said via Crash.Net at Monza.

“Obviously there was also Seb that was capable of having the pole position and we obviously didn’t want to sacrifice one car for the pole with the other.

“It was quite tricky. I definitely think that situations like what happened after the second corner shouldn’t happen, there are two cars side-by-side going at 20kph and we couldn’t pass them.

“I think most of the drivers behind wanted to pass but didn’t have the opportunity. This situations have made a big mess towards the end and that’s why some cars didn’t make it to start their laps.

Meanwhile, Sebastian Vettel was not happy with his team-mate Leclerc for not sticking to the plan in Q3 and felt he missed out on pole as a result.

Leclerc insisted, though, that he did the best he could in the utterly bizarre circumstances.

“The plan was that in the first run Seb was giving me the tow and in the second run I would give him the tow,” Leclerc added.

“I actually went out of the box in front of him and then there was the huge mess after Turn 1 and 2 and the McLaren and the Renault, they stopped in the middle of the track and we had nowhere to go.

“Seb overtook me there with the mess because obviously we were quite aware that it was quite tight on time and then I stayed basically behind Seb until the last straight where I heard also on the radio ‘you can overtake Seb’, so I overtook him but then I had no time for me either to start the lap.

“It was a shame but I don’t think I could have done much more.”