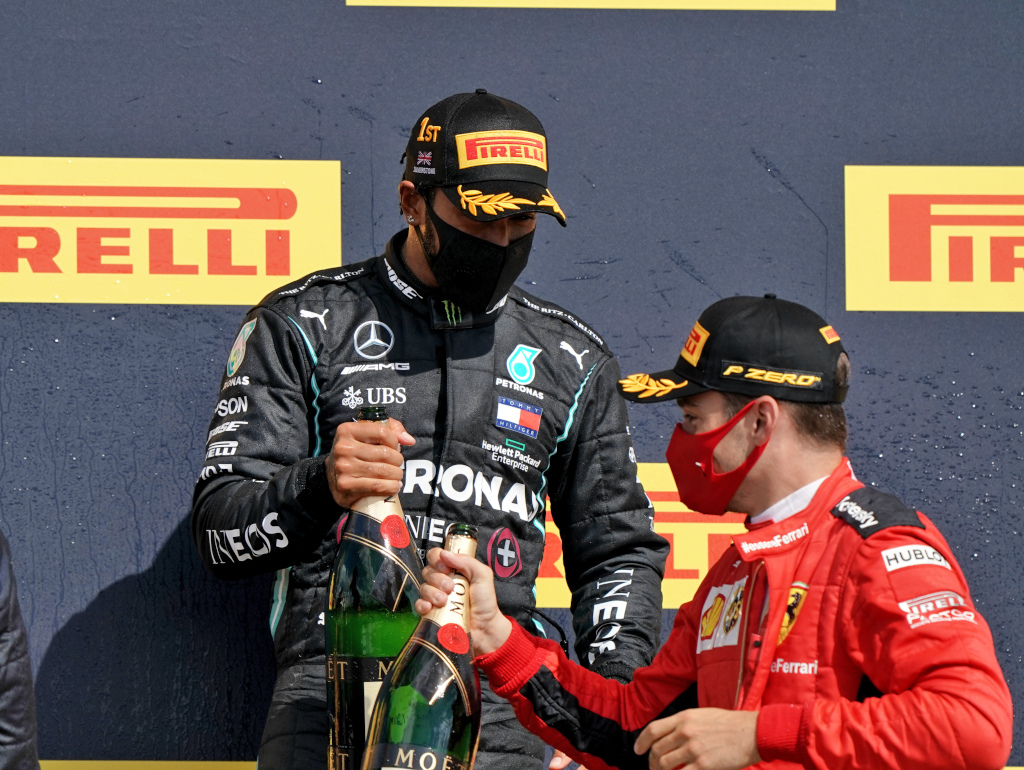 Charles Leclerc says he sees Lewis Hamilton very differently to Michael Schumacher; one was a legend on TV, the other is his rival.

Hamilton is on in the midst of a record-breaking Formula 1 season.

Earlier this year, at the Eifel Grand Prix, the Mercedes driver matched Schumacher’s record for the most wins in Formula 1.

One race later, Portugal, he broke it before adding a 93rd win to his tally at the Emilia Romagna Grand Prix.

Next Sunday in Turkey he’s chasing another record, the most wins with one team, 73, having tied that at Imola where he also took the record for the most consecutive race finishes and extended his run for most grands prix finished in the points.

Facing the prospect of wrapping up his seventh World title in Turkey, which would equal Schumacher’s record for the most Drivers’ Championships, 2020 is Hamilton’s season.

But is he better than Schumacher?

He replied: “I don’t like to compare different eras. You didn’t drive against the same people, the cars are very different.

“They are two fantastic sportsmen who were incredibly successful in F1 and deserve a lot of respect.

“When I see Lewis on the track, it’s not the same image like I have of Michael Schumacher, although just like Michael, he will be a legend when he leaves F1 one day.”

He added: “When I was little, I always watched Michael Schumacher on television. That’s why I perceive him somewhat differently. I respect Lewis very much. But he is also one of my competitors.”

When Hamilton matched Schumacher’s 91 wins, his son Mick was on hand to present the British driver with one of the helmets Schumacher worn during his stint with Mercedes.

Hamilton added that to his collection, which also includes a lid worn by Aryton Senna.

Leclerc wouldn’t mind one of those one day.

“For me there are two big legends and idols in F1: Ayrton Senna and Michael Schumacher. Just to get a helmet from one of them would be incredible,” he said.

“The gesture with Lewis and Mick was definitely very moving.”

Asked if he will do a helmet swap with his soon-to-be-former team-mate Sebastian Vettel come the end of this season, Leclerc said: “I wanted to ask Seb, I haven’t done that yet. I would definitely like it.”

Four-time World Champion Vettel is off to Aston Martin next season while Carlos Sainz will join Leclerc at Ferrari.