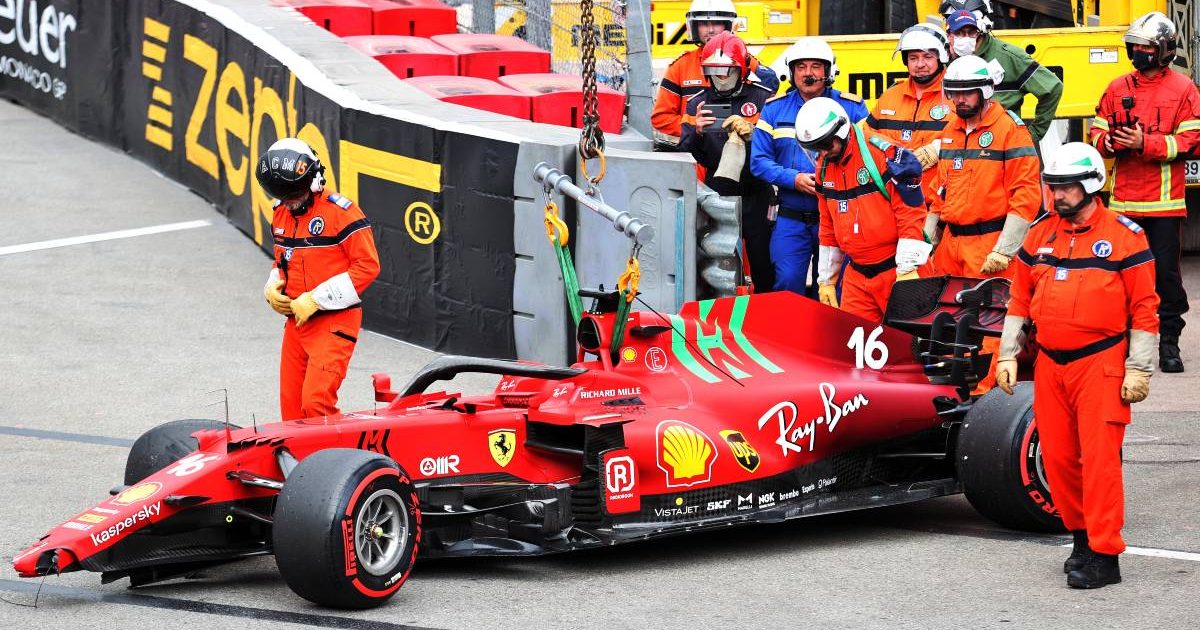 Charles Leclerc has said he was worried his pole position may not actually materialise after a dramatic end to a thrilling Monaco Grand Prix qualifying session.

As Ferrari continued the surprisingly impressive pace they had shown in free practice, local hero Leclerc found himself on provisional pole by nearly a quarter of a second after the first set of flying laps.

But as he tried to go even faster with the clock ticking down towards the end of Q3, the Monegasque driver clipped the barrier at the Swimming Pool complex, sending his car off line and into a crash which brought out the red flags.

Ending the session not only for himself but also all those chasing him, Leclerc sheepishly walked back to the pits with mixed feelings – having exceeded expectations but also put his race prospects in jeopardy.

A big repair job will be needed and the accident was sufficiently severe to suggest a new gearbox may be required – which would mean a grid penalty.

Asked by pit-lane interviewer Paul di Resta immediately afterwards if he was concerned about the gearbox, Leclerc replied: “I am, but let’s see.”

He added: “It’s a shame to finish in the wall, it doesn’t feel the same, but at the same time I’m incredibly happy about my first timed lap.

“The first corner was quite tricky, I didn’t do a great first corner, but then the second and third sectors I nailed it.

“Just very, very happy to be on pole obviously. It was very, very difficult to manage myself mentally after FP2. I could feel I was quite emotional in the car but I told myself ‘now it’s Q3, now it’s time to put everything together’ and I managed to do so.

“I’m incredibly happy but it’s tomorrow we score points. It’s a big surprise for everyone to be on pole and in fourth place [team-mate Carlos Sainz] for the race tomorrow.”

Leclerc, who, in the event of avoiding a penalty, will be joined on the front row by Red Bull’s Max Verstappen, with Lewis Hamilton down in seventh on the grid, has yet to finish his home race in three previous attempts.

“I’ve always been very unlucky here, so let’s wait and see,” he said.

His accident rekindled memories of occasions when Michael Schumacher, in a Ferrari, and Nico Rosberg, for Mercedes, had also secured pole position at Monaco by bringing qualifying to an end when stopping on track.

“If I was doing it on purpose I would have done it a bit less hard!” joked Leclerc. “For now I’m worried about the rear of the car. I hope it’s OK but it doesn’t look OK.”

“We are worried but we are checking it. It’s too early to know,” said Binotto.

“Being on pole was not expected, but after Thursday we were somewhat happy with the car performance.”