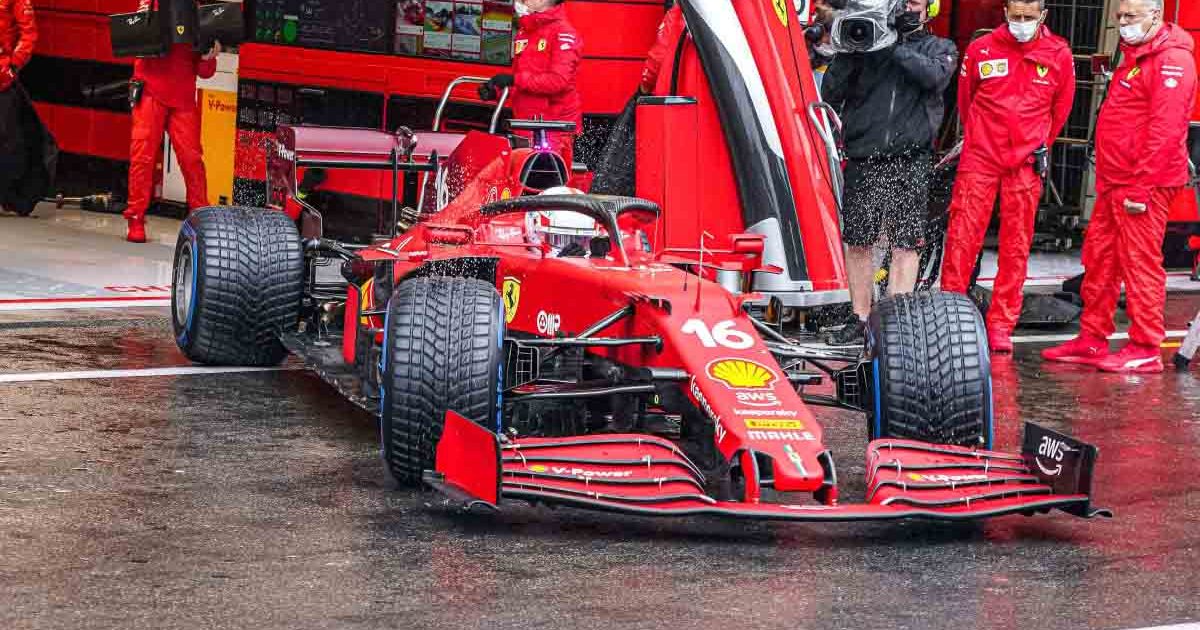 Charles Leclerc’s car broke a rule of the FIA by changing tyres on the grid after the race was delayed, but he was not punished for it.

Had he been penalised for it, he may have dropped out of the points after registering in eighth place, but he was able to keep the points available to him.

The race was halted and his Ferrari mechanics changed his tyres on the grid – which is not permitted by the FIA, as their rules state.

Article 40.1 of the FIA regulations reads: “If the Race Director decides the start should be delayed, the following procedures shall apply:

“Tyre changing on the grid is not permitted during such a delay.”

Gutted that we couldn't go racing today. Really feel for all of you at the track who stayed in the rain and to everyone who was just watching the rain on TV. Hopefully next Sunday will be a lot more fun 🤞 pic.twitter.com/SWq1xICM6p

But because Leclerc’s team was able to notice and correct their error in good time, the FIA decided not to record a punishment against the Monegasque driver.

“The tyres on car 16 were changed after the announcement of the delayed start. This is not permitted during such a delay,” read the statement from the FIA explaining their reasoning.

“However the team rectified the mistake within a matter of minutes and prior to the car leaving the grid.

“Therefore although a breach of the regulations occurred, the Stewards impose no penalty as the breach was rectified.”

One driver who was not lucky enough to escape a penalty, however, was Lance Stroll.

It will probably be immaterial to the Aston Martin driver after dropping down to P20 from his P18 grid slot, but the FIA decided to punish him and his team nonetheless.

Stroll’s rear wing assembly was changed in the lengthy delay to the start of the race, which fell outside FIA regulations.

They stated that the usual penalty would have been a pit lane start for the Aston Martin but, due to the unique nature of the race, they decided upon giving him a 10-second penalty for his infringement, which dropped him to the back of the classification on a historic day for Formula 1, which will be remembered for the wrong reasons.