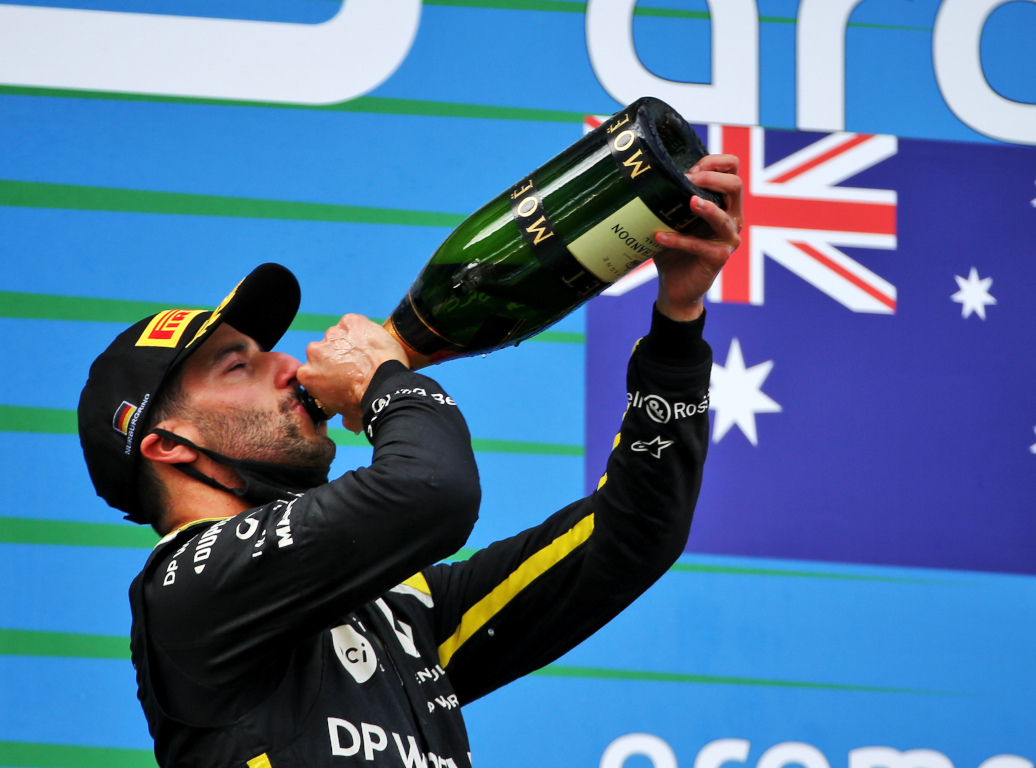 Daniel Ricciardo was left drinking alone on Sunday evening after forgetting to share a shoey with Max Verstappen and Lewis Hamilton on the Eifel podium.

It has been two years since Ricciardo last sprayed champagne on a Formula 1 podium, however, he finally broke his duck in Renault colours at the Nurburgring on Sunday.

The Aussie finished the race in third place, bagging his first top-three result as a Renault driver and his first since the 2018 Monaco Grand Prix.

The long break, or Verstappen’s quick thinking, meant he forgot an important piece of his personal celebratory routine.

Asked why he was still wearing his race boots as he faced the media in the bullpen, the 31-year-old realised that something was missing: the shoey.

“Mate, this is really bad, I forgot all about it,” he said.

“I literally forgot about it.

“I’ll tell you why, because as soon as they had done the champagne Max was already spraying me and for the first time ever they chilled the bottles.

“Normally the champagne’s like lukewarm but it was freezing – maybe because it is so cold outside.

“So I was just, I think just, shocked with cold and I didn’t even…

Ricciardo made up for it later, taking part in his own personal celebration, shoey included.

“Here it is, belated but better late than never…”

Ricciardo’s first Renault podium was great news for the team but perhaps not for managing director Cyril Abiteboul.

Abiteboul made a bet with Ricciardo that when he bags his first podium, the team boss will get a tattoo of Ricciardo’s choosing to mark the occasions.

“It’s going to happen,” Ricciardo said when asked about the bet.

“We’ll have to do some thinking now, but probably something to do with me, but I think with a German flavour.

“This is obviously the place we did it so a little tip of the hat to something traditional in Germany as well.”