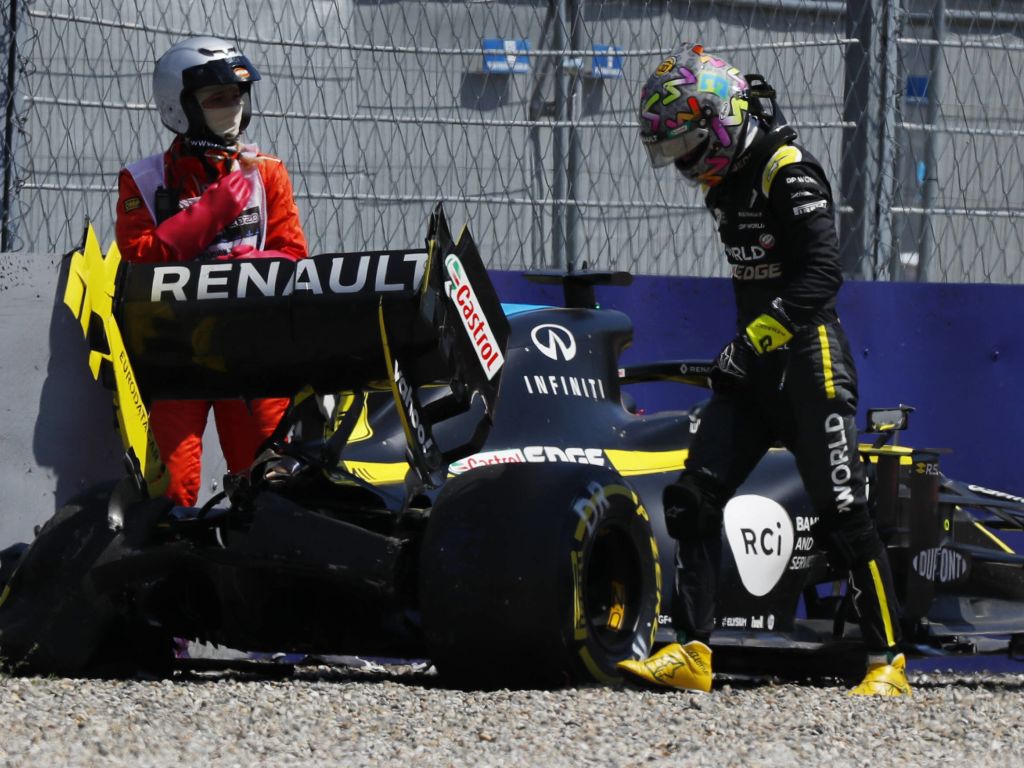 Despite that heavy crash during FP2, Daniel Ricciardo has escaped a grid penalty for the Styrian GP with his chassis and power unit good to go.

The Renault driver lost control of his R.S.20 early in the session at the penultimate corner of the Red Bull Ring.

He would lose the rear of the car and went sliding into the tyre barriers at high speed.

And although the Aussie was seen limping away from his car, he was soon passed fit to continue in the race weekend.

He was also free to continue without a grid penalty because his gearbox has been swapped to the race unit used last weekend in the season-opening Austrian GP.

“After a thorough inspection of the engine it all seems good,” Renault boss Cyril Abiteboul told Motorsport.com.

“We were switching to the race gearbox anyway, so no worries there.”

Abiteboul confirmed that Ricciardo was “absolutely fine”, and that it was a “tailwind” that likely caught him out.

“First and foremost Daniel is fine,” he said.

“Even though he is looking a bit shell-shocked, he is absolutely fine. He has a very small bruise on his leg, but nothing to be worried about.

“As to what happened, I think the car is pushing a bit to have a bit more performance, and mindful of the fact that FP2 could be the only dry session we were trying to explore some dry set-up for more qualifying performance.

“So far all drivers didn’t put a foot outside, but it has been one like that for Daniel which led to quite spectacular consequences.”

Ricciardo was forced to retire from the Austrian GP, and Abiteboul confirmed that it was due to a “cracked radiator”, an issue they hadn’t seen before.

“It was a very strange thing that never happened [before],” he admitted.

“It’s a small crack on the radiator, one of the coolers, which meant that we had a loss of pressure, and therefore the water temperature in the engine was starting to creep up. And we stopped the car in order to protect the engine really.

“What we’ve been able to do is the type of radiator magic that F1 is used to. We sent all the radiators to Enstone, we got them inspected, x-rayed, every single one of them, and shipped them back in time – no quarantine for them. We should be fine in that area.”

Ricciardo’s R.S.20 is good to go for the wet qualifying session at the Red Bull Ring, and Abiteboul expects the conditions to be to Renault’s benefit.

“I think we have a decent car, but still a car that’s missing a little bit of performance, in particular at a track like this one where the corners are very fast, so the effect of the wet means that the cornering speeds are lower, so we are less exposed to the weaknesses that we still have on our car,” he confirmed.