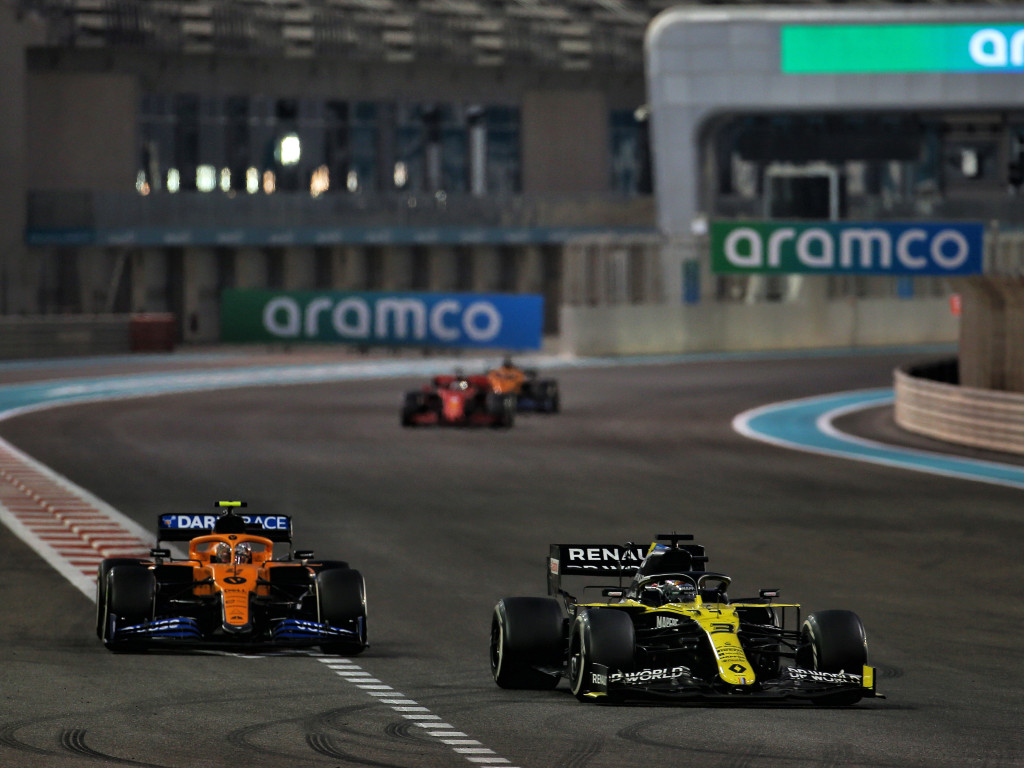 Daniel Ricciardo said it was a “bonus” that his strong final race with Renault coincided with McLaren securing P3 in the Constructors’.

The Abu Dhabi Grand Prix brought at end to Ricciardo’s two-year stint with Renault as he now gears up to switch to McLaren for 2021, and P7, along with the bonus point for setting the fastest lap of the race, was in his mind a fantastic “send-off”.

And the “bonus” to that was McLaren overturning the 10-point deficit on Racing Point to claim P3 in the Constructors’ Championship with Lando Norris finishing P5 and Carlos Sainz P6 in Abu Dhabi.

“I was pretty stoked with I think the year in general, it was really strong,” Ricciardo told Sky F1.

“And in the race the hard [tyre] worked, went really long with that, and that really set it up. That was an exceptionally strong stint.

“I felt comfortable and then we put the medium on and a bit more kind of in no man’s land, I felt like McLaren were definitely too far in front.

“To be honest I started the medium stint quite slow, because I did hear there was some graining and then I basically got on with it and picked it up.

“But the gap, I don’t believe I was ever going to catch them, and then catching is one thing and passing is another.

“When the re-start happened Lando [Norris] obviously on the fresher hard I had to hold him off to do the best for my race.

“But at the very end we pushed for fastest lap so a nice little send-off.

“I’m personally happy with how it ended for me, I felt like I did all that I could, and obviously the bonus is I now walk in to the team that got third so it’s a big day for them as well.”

For the final time this year…

Daniel P7 // Esteban P9
Esteban takes the spot at the very last moment!!! And Daniel has the fastest lap of the race!!!!

Ricciardo added that the Abu Dhabi Grand Prix felt like a “time-trial for him.

“It was one of those races where there wasn’t much action, I wasn’t overtaking or defending a whole lot, but the whole race for me felt a lot like a time-trial,” he told reporters at Yas Marina Circuit.

“I really risked it all to get that fastest lap. I got a point, it doesn’t change anything but I think honestly to send-off in terms of my last lap in this car, for it to be the fastest lap on-track, it’s a nice way to say goodbye to the team and to thank them.”

While McLaren secured P3 in the Constructors’ Championship Renault must settle for P5, but Ricciardo said his now former employer should see the positives in that.

“It was a hell of a fight all year, third, fourth, fifth, unfortunately we were there in fifth but it was so close,” he said.

“I think to put it up to the other teams Renault have to be happy with the 12-month turnaround.”