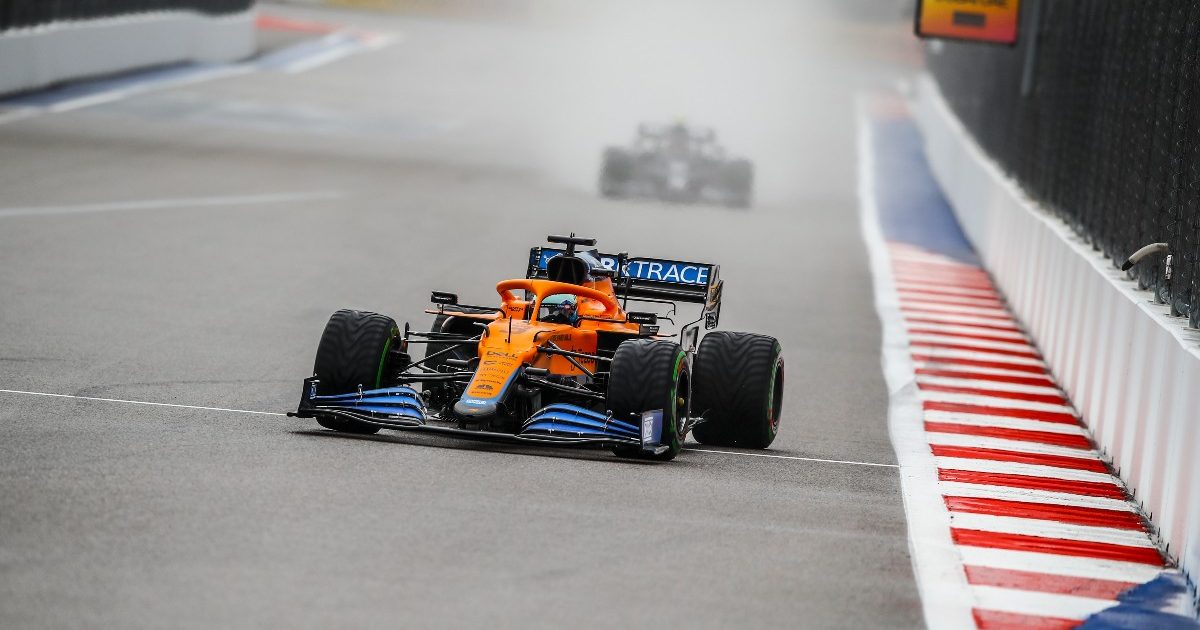 Both drivers ultimately made it to Q3 at Sochi with Ricciardo set to line up P5 for the start, while Stroll will launch from P8, but all the way back in Q1 this pair ended up in a tricky situation.

Stroll complained of being impeded by Ricciardo, who had been asked by McLaren to slow down as his team-mate Lando Norris approached, along with Stroll.

The stewards decided spray had affected Ricciardo’s chance of seeing Stroll, hence why it was only a reprimand for the Australian, although there was no excuse for McLaren who have received an official warning, with the stewards stating a similar incident in the future could lead to the team being fined.

“The driver of Car 3 [Ricciardo] was on a slow-down lap and was warned by the McLaren team of the approach of his team-mate (Car 4) [Norris],” read the report from the stewards.

“Rearwards visibility was affected by the wet conditions and the driver of Car 3 was unaware of the approach of Car 18 and, in the opinion of the stewards, would have been unable to see its approach in any case until the last moment. This was compounded by the spray from Car 4, which had just passed Car 3.

“The competitor (McLaren F1 Team) admitted it had made a wrong assumption that Car 18 was on a slow lap having just completed a fast lap. However, in fact it was doing consecutive fast laps due to the improving (but wet) track conditions.

“The stewards compared this situation to every other impeding case for the past two-and-a-half seasons. The stewards believed this bordered on “unnecessary impeding”, hence was a breach of the rules and therefore required a penalty. However, considering all the circumstances, it was felt a reprimand was the most appropriate and consistent penalty.

“However, clearly the McLaren team made an error in not accurately monitoring the traffic behind Car 3, and therefore an official warning is issued to the competitor and it is noted a similar failure in future could result in an additional monetary or other penalty to the competitor (and the relevant driver).”

Ricciardo is therefore free to start the Russian Grand Prix from P5, while Norris will lead the pack away after securing his first ever F1 pole position.

And so Ricciardo was keen to praise the work of his team-mate.

“I think we did all right – not as good as Lando, so congrats to him on the pole. It was a very good lap, a great lap,” Ricciardo told reporters.

“But from a team point of view, to be first and fifth, two cars in the top five, is solid.”

P5 was comfortably Ricciardo’s highest position of the weekend so far, although he did not agree with the idea Sochi is a track that does not suit him.

That is something he says will need to be answered in the race, not after the “unicorn conditions” of qualifying.

“Yesterday I certainly wasn’t quick. But when we looked over everything, really the whole day was interrupted so it was hard to really get a rhythm and get into it,” he said.

“I think we can be pretty excited. The grid is pretty mixed. Even as a fan it should be a pretty exciting story to tell tomorrow.

“I imagine most teams set the cars up for the wet, so if it’s dry tomorrow it’s probably not optimal conditions, optimal set-up that we’ll be running, so that could change the order as well. Maybe some cars may cope with that better.”