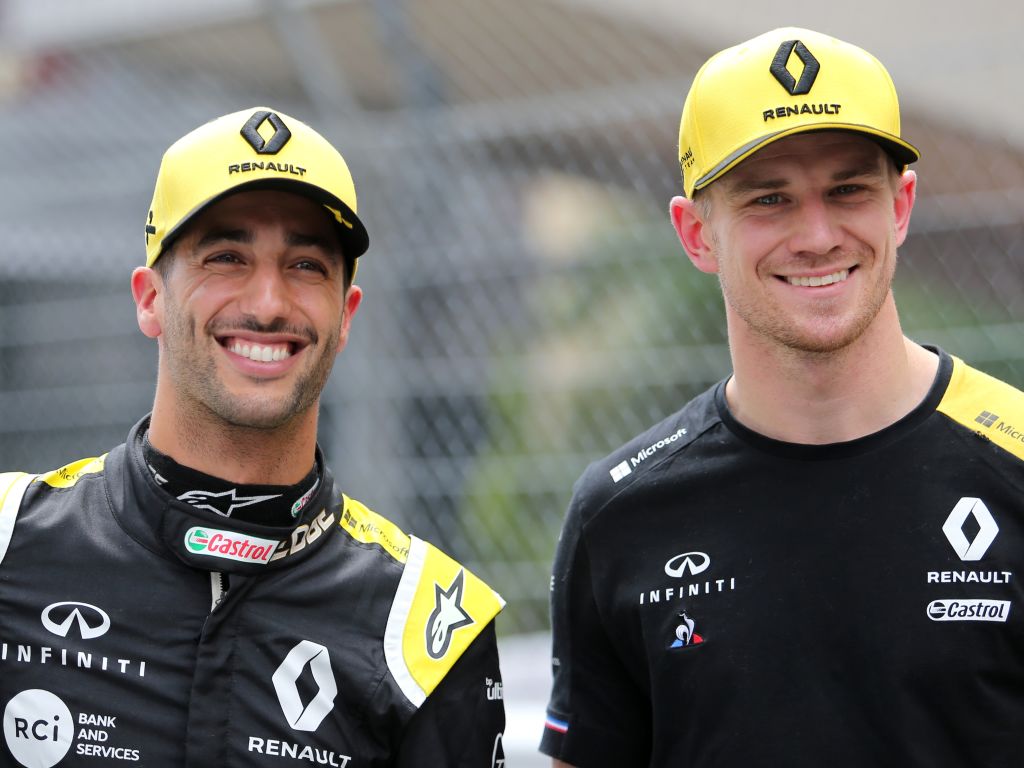 Daniel Ricciardo is targeting Renault’s first F1 podium finish since 2011 at the 70th Anniversary Grand Prix – with his sights trained on Nico Hulkenberg.

Outside of the dominant Mercedes duo who locked out the front row of the grid at Silverstone, P3 was anyone’s with Red Bull failing to live up to their widely-perceived status as best of the rest.

Instead, it was Hulkenberg who proved to be the surprise package for Racing Point, standing in for Sergio Perez who has tested positive for COVID-19. Then came Max Verstappen in the Red Bull, followed by Ricciardo who was “stoked” with his P5.

The Australian certainly fancies his chances of ‘doing a shoey’ (drinking champagne from his shoe) by getting on the podium – which would be the first time a Renault driver has done so since Nick Heidfeld finished third at the 2011 Malaysian Grand Prix.

Ricciardo thinks his former team-mate Hulkenberg, who has not driven in an F1 race since being released by Renault at the end of last season, could struggle with the intensity at a physically demanding circuit with high G-forces.

“I think fifth place is an awesome result for us and I’m very happy with that. I knew my lap was pretty good, I really was on the limit with the car and I got pretty much all I could from it today.” @danielricciardo

“Typically, I look at the guys around me,” said Ricciardo of his prospects for Sunday, reported by Autosport.

“Max you would think will have a bit more race pace but he’s starting on the hard tyre, which looks quite nice, but it might not work for him. He might be in his own little race.

“But I do feel Nico can be a target tomorrow, for sure. I think even on the fact alone that he hasn’t done a race or race distance yet, so for him just to understand the car, and I don’t know…if there were fans here, maybe someone would be lucky enough to catch his head in one of the high-speed corners by about lap 20!

“He’s obviously got the car under him but I think he will have a few other obstacles to face tomorrow, so that could certainly bring him into the battle, and I think it will be a good one.

“I think Max is the unknown. We’ll see how he goes on the hards.”

Of his qualifying lap, Ricciardo added: “It was pretty mega, it was really cool.

“I think we had a bit of hype after yesterday, in FP2 finishing top three, I think that got everyone a little giddy.

“But I wasn’t expecting a top three today, even though we were close, but to be top five I was really happy.”