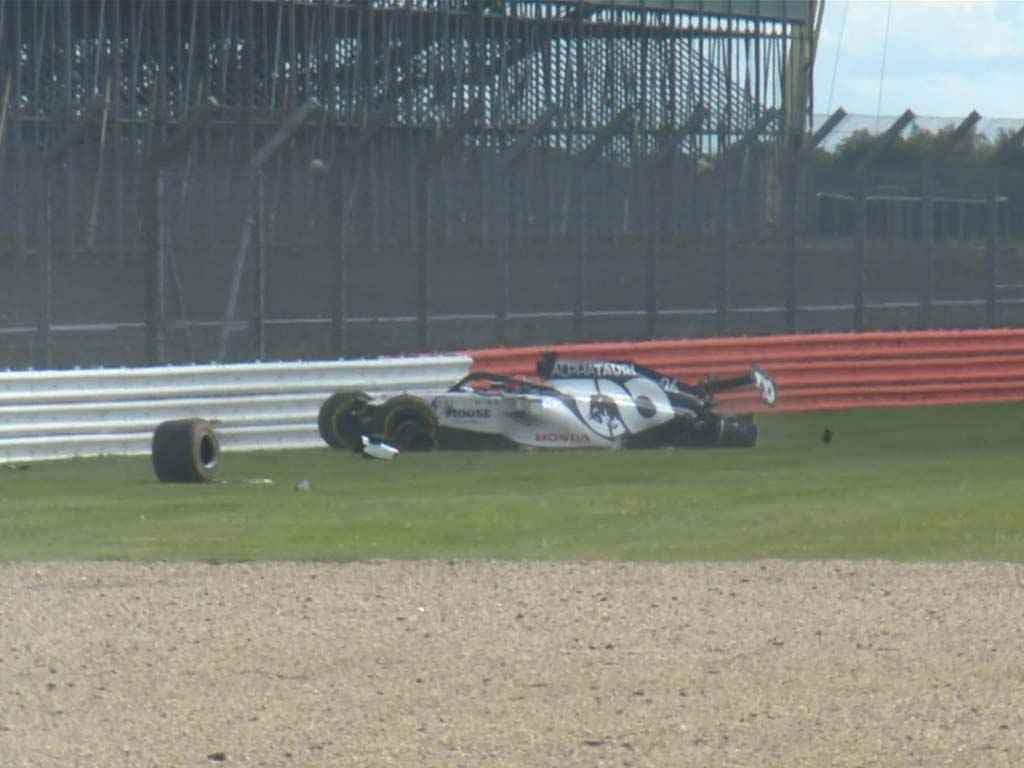 A tyre barrier has been extended at the Maggots/Becketts section of Silverstone after Daniil Kvyat’s 180mph crash there last week.

On lap 13 of the British Grand Prix, Kvyat spun his AlphaTauri at high speed due a right rear puncture and hit a metal barrier almost head-on – although fortunately the Russian was uninjured having initially sat motionless in the badly damaged car.

But any driver who goes off at the same place during the 70th Anniversary Grand Prix weekend will have a softer impact due to the extension of the tyre barrier.

It features among the subtle changes the FIA have implemented for the second race of Silverstone’s F1 double-header.

At the exit of Becketts entering Chapel, extra kerbing has been added after concern was raised that debris may have been trapped in the kerb and contributed to the dramatic late tyre failures that affected race winner Lewis Hamilton, plus his Mercedes team-mate Valtteri Bottas and Carlos Sainz’s McLaren.

Car looks like it’s hit by… a torpedo pic.twitter.com/KEmnDlm2Lz

“We are in a unique situation here,” said FIA Formula 1 Race Director Michael Masi on the official Formula 1 website.

“Obviously unlike normal, when there is only one event at a venue, having two events consecutively where we can make changes between events with the support of the Silverstone Circuit here and the management.

“First of those is the installation of the tyre barrier where Daniil Kvyat had his incident last weekend, and we’ve installed that in Turn 10 through Turn 11 at the back of the run-off.

“And additionally, where the viewers would have seen a whole lot of rubble and dust being brought up at the exit of Turn 13 going into the apex of Turn 14, we’ve extended that kerb back approximately 30 metres in total to try to remove that issue, which was something we discovered.

“There was some more bitumen there from last year that had been removed and now we’ve installed a proper kerb in the same style. Speaking to a couple of the drivers, they think that will be a huge improvement for this weekend’s event.”

Kvyat, who had apologised to his team over the radio immediately after the crash and then pushed away a TV camera as he left the scene, confirmed he had suffered a puncture.

“I thought it was my fault, as at first I always tend to blame myself,” said the Russian.

“But after reviewing the video we saw that something happened out of my control.”