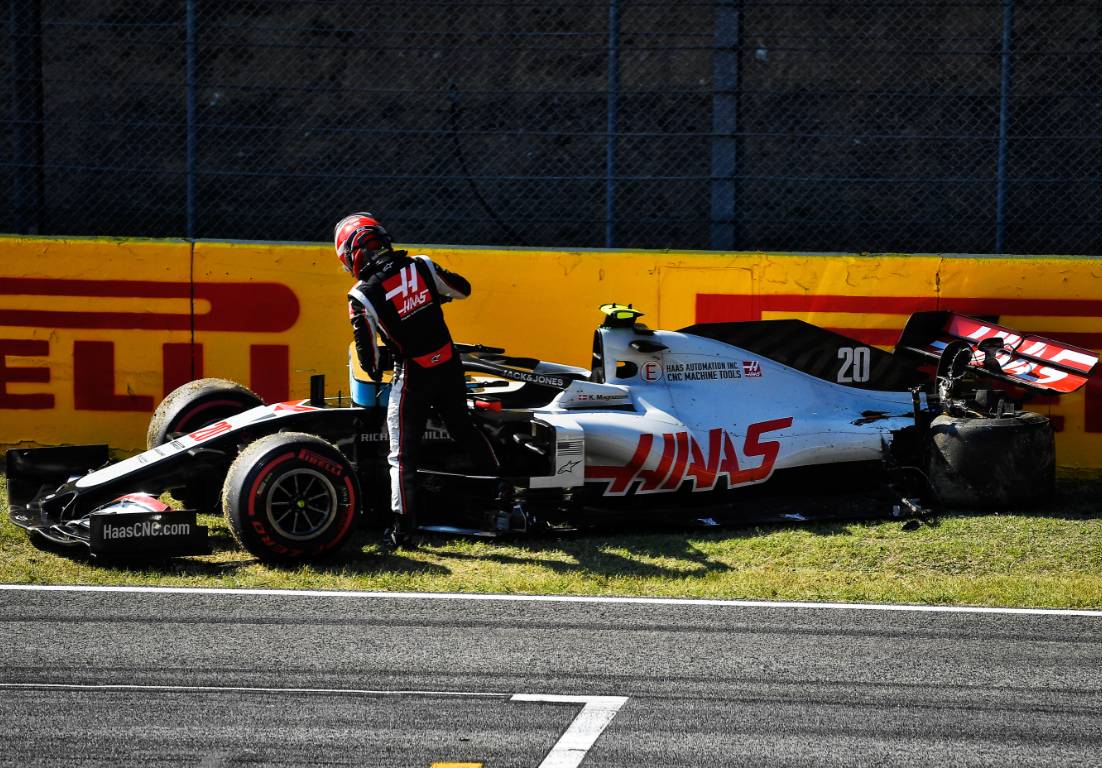 Twelve drivers have been warned following the Mugello melee on the Safety Car restart of the Tuscan Grand Prix that caused the race to be red-flagged.

The Safety Car was deployed following a first-lap incident that forced Max Verstappen and Pierre Gasly to retire, and had just returned to the pits when a spectacular crash on the start-finish straight occurred.

Leader Valtteri Bottas was controlling the pace, weaving to warm his tyres, but before he had even accelerated to restart the race in earnest, cars began colliding towards the back of the pack and veering into the wall.

Four drivers had their race ended – Kevin Magnussen, who was hit from behind by Antonio Giovinazzi, Nicholas Latifi and Carlos Sainz – before the race was stopped for the first time. The second was after Lance Stroll had spun and crashed his Racing Point.

The stewards heard from Magnussen, Latifi and Daniil Kvyat but decided not to apportion any individual blame. Instead, they warned those four drivers, as well as Alex Albon, Stroll, Daniel Ricciardo, Sergio Perez, Lando Norris, Esteban Ocon and George Russell.

A stewards statement read: “The Stewards heard from the drivers of Car 10 (Kevin Magnussen), Car 6 (Nicholas Latifi), Car 26 (Daniil Kvyat), team representatives, reviewed video evidence including car onboard cameras and examined the telemetry of each car involved in the restart.

“The Stewards conclude that the root cause of this incident was the inconsistent application of throttle and brake, from the final corner along the pit straight, by the above drivers.

“The Stewards acknowledge the challenges the location of the Control Line presents at this circuit and the desire of drivers to take advantage of the restart. However, this incident demonstrates the need for caution to be exercised in the restart situation and note that there was an extreme concertina effect which dramatically increased as it moved down the field.

“We also note that some drivers might have avoided being involved in the incident had they not followed directly behind the car in front. By doing so, they effectively blocked off all visibility of what was happening immediately in front of the preceding car.

“A warning has been imposed as it is the view of the Stewards that no one driver was wholly or predominantly to blame.

“It was further noted that the driver of Car 77 (Valteri Bottas), and the other drivers involved in the restart not mentioned above, complied with the regulations. Car 77 had the right under the regulations to dictate the pace.

“Competitors are reminded they have the right to appeal certain decisions of the Stewards, in accordance with Article 15 of the FIA International Sporting Code and Article 10.1.1 of the FIA Judicial and Disciplinary Rules, within the applicable time limits.”