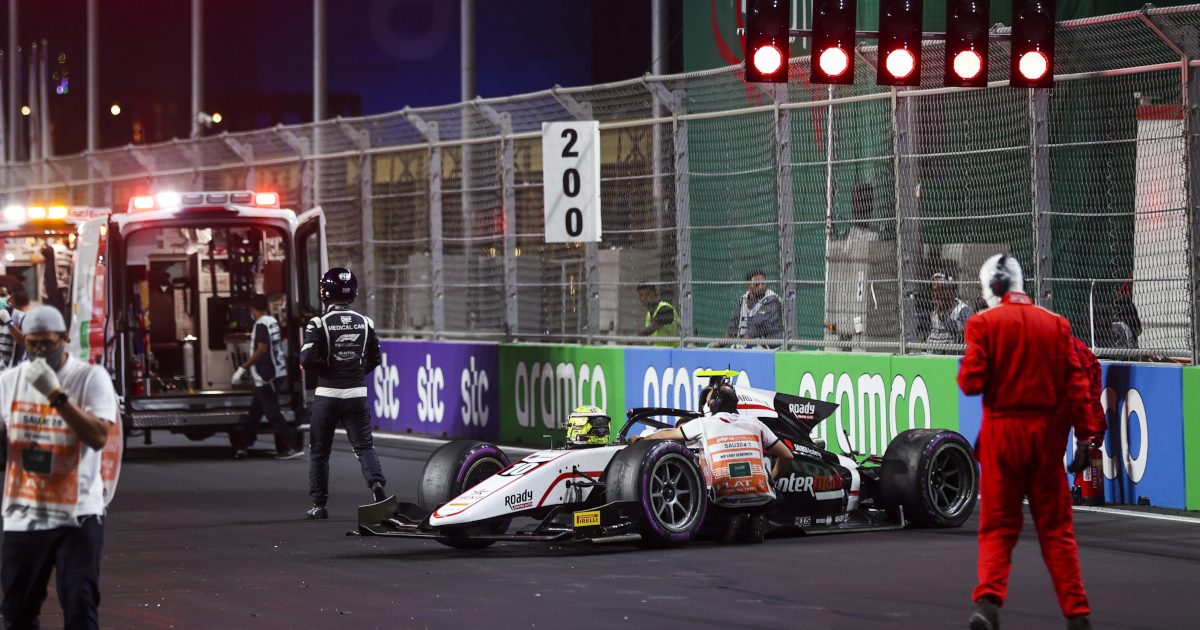 Enzo Fittipaldi was lucky to escape with only a fractured heal as he ploughed into the back of Theo Pourchaire at the start of the F2 feature race in Saudi Arabia.

Lining up on the grid for the third and final Formula 2 race at the Jeddah circuit, Fittipaldi accelerated off the line and did not notice the stalled ART Grand Prix car of Pourchaire.

While their rivals were quick to duck around the Frenchman’s stationary car, Fittipaldi slammed in the back of it.

Such was the impact that pieces of bodywork went flying the width of the track.

The race was immediately red flagged as their rivals lined up in the pit lane anxious for news of the two drivers involved.

F2 announced that while Pourchaire had been taken to hospital via ambulance, Fittipaldi was flown by helicopter to the King Fahad Armed Forces Hospital.

His brother Pietro has issued an updated on the health of the Charouz Racing System driver, thankfully revealing that it is “much better” than many expected.

“Enzo is awake/alert and resting at the hospital,” Pietro tweeted.

“He has a fracture in his right heel but thankfully things are much better than what we all expected.

“Thank you to the FIA, the team and all the medical staff here in Saudi Arabia.

As for Pourchaire, the 18-year-old says he is feeling fine but he’s not sure if he’ll be on the grid for the season finale in Abu Dhabi.

And I completely agree with you on that ! This is not acceptable to not have an anti-stall. We could have avoided that ! https://t.co/CqL31DjaeE

“Just wanted to tell you that I’m globally fine,” he said.

“For the moment I don’t know if it’s already the end of the season for me.

“But the most important is not that, that was a really big one and Enzo is injured.

“I wish him the best recovery possible!”

Pourchaire, a member of Sauber’s junior academy, spoken to Fred Vasseur shortly after the crash.

The Alfa Romeo team boss told Autosport: “Theo is OK, I spoke with him half an hour after the race, and he was on his way to hospital, to get some checks, some X-ray.

“But everything is going well, and he told me no doubt that he will be in Abu Dhabi.

“But, perhaps he will be a bit stiff tomorrow, but let’s see for Abu Dhabi.”