Home News See how the final day of 2021 Testing unfolded 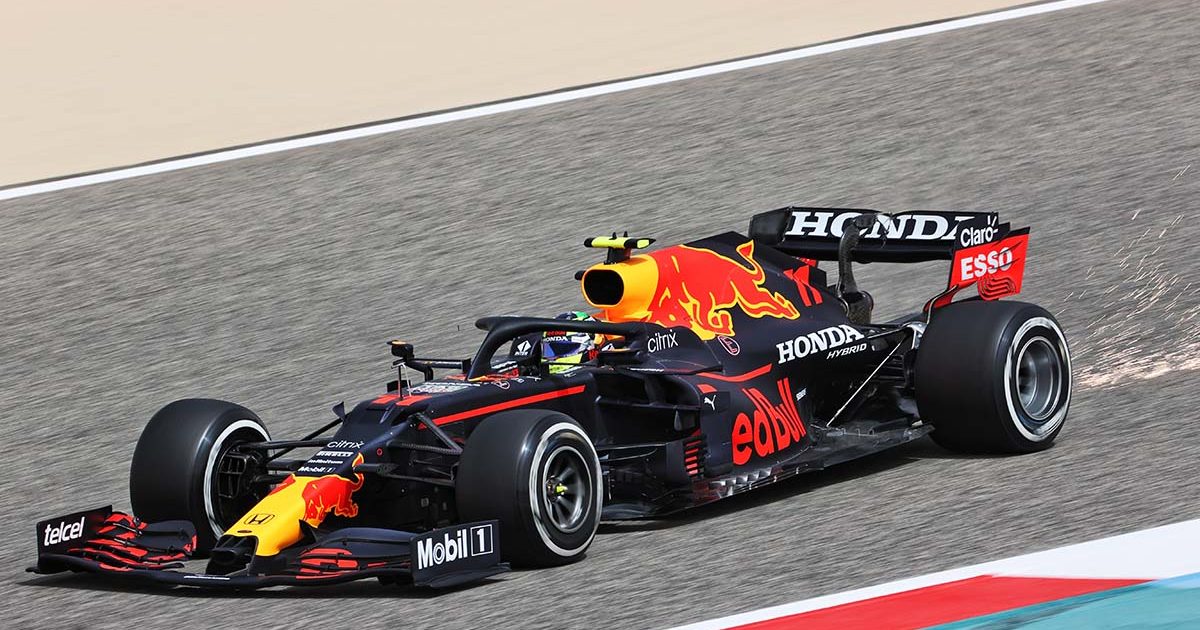 The sun has set on pre-season testing for another year. Here’s how the final session panned out in Bahrain…

F1 TV Pro* viewers can watch all the live action from pre-season testing! Click this link and use the code F1TV25 to save 25% on an annual subscription.

*Available in selected territories, a full list of eligible countries can be found here.

1915: The 2021 campaign will get underway at the same place in just two weeks time. We’ll be here covering it all, so join us then.

1913: Ultimately though, it’s impossible to definitely figure out any kind of pecking order until the season opener. Thankfully, we don’t have long to wait.

1911: Well, reflecting on the past three days, some teams, such as Red Bull and McLaren, will be very happy indeed with their work, while Mercedes and Aston Martin in particular may be a little concerned.

1908: Today’s session ended with a bang as Sainz clashed wheels with Raikkonen as he barged his way past and forced the Finn off-track…

1900: That proves to be the final bit of movement on the timesheet. 2021 pre-season testing is over.

1841: Vettel is in the paddock talking to the press, so its save to say he won’t be back out. It’s a power-unit issue for his car.

1837: Hamilton goes spinning at the final corner. He avoids damage, but it’s worrying how little he seems to be in control of the w12.

1830: Ferrari have managed to get Sainz back out there, but he’s not looking too quick.

1828: Hamilton, on softs, finally does a decent time, one quick enough to put him in P4.

1818: He doesn’t stay there for long as Tsunoda takes back top spot. The Japanese driver is certainly making a big impression today…

1813: The issue on the Ferrari of Sainz is a hydraulics problem. With 45 minutes left, he may not get back out.

1812: Another man to clock plenty of laps today is Russell, and he’s just moved up to P9.

1809: If we handed out a Driver of the Day award for testing, Kimi would surely get it today. The fastest time and the most laps, 143.

1802: The bottom two on the timesheet today? Vettel and Stroll. Far from ideal preparation for Aston Martin.

1757: Sainz is in the pits after getting stuck in fourth gear. Sitting in P11, it hasn’t been the best final session for him, and it’ll be a big blow if it ends early.

1750: Hamilton has fresh softs bolted on. Can he finally set a quick lap? He has just over an hour to do so.

1739: Vettel is out of his car and the screens are up in the Aston Martin garage. More issues it seems…

1737: He goes purple again, improving by just over a tenth.

1736: Verstappen is back out on a fresh pair of test tyres…

1727: The Honey Badger is flying out there. He’s now split the Red Bulls and is up to P2. His replacement at Alpine meanwhile has moved into the top five. Ricciardo on softs and Alonso on mediums.

1723: More of this during the season please and thank you.

1716: Kimi breaks into the top five. Judging by testing, the Alfa Romeo isn’t far off the Ferrari at all. Surely not…

1711: Ricciardo also improves and goes ahead of Leclerc. The track is getting quicker.

1709: Verstappen, on prototype tyres, which are medium compounds, goes purple by two-tenths! He takes us until the 1:29s.

1701: Alonso slots into P6 now. He really does look like he hasn’t been away…

1657: Two hours to go of 2021 testing. We’re approaching the period of the day where the conditions will be at their best.

1650: Ricciardo sticks on softs and goes P3, just ahead of his team-mate.

1643: Alonso pulled off an overtake on Hamilton a few laps ago, diving down the inside at Turn 1, and we can’t stop watching it. Great to see them wheel to wheel again.

1641: Hamilton was green in the first two sectors before going wide at the final corner. He just can’t tame that car.

1639: One man who could really do with a quick lap today is Vettel – he hasn’t exactly set the timesheets alight so far this weekend. He’s currently in P15.

1636: After heading back in, Hamilton is now hitting the track on mediums.

1619: He goes P14, while Tsunoda has a moment and just misses the barriers.

1611: Hamilton is finally out on-track, and goes wide immediately…

1557: Mercedes were working on the floor of the car, but the screens are now down. The front of it is still being altered.

1553: Verstappen goes P9 with his first timed lap on hards.

1539: Ricciardo, on fresh mediums, is looking quick. He’s just moved up to P5, going less than a second slower than Perez’s lap, which is the best of testing so far.

1522: Verstappen looks to be on a longer run, so don’t expect him to get close to his team-mate’s time anytime soon.

15:15: Alonso goes P9 immediately. Alpine haven’t had any issues in testing so far; can they last the final four hours?

1512: Verstappen, Vettel and Alonso are out on-track already.

1506: We have eight new drivers on-track for this afternoon, with Kimi Raikkonen and George Russell the only ones from this morning staying in the driving seat.

1500: Hello and welcome back to coverage of the final day of pre-season testing. Four hours to go…

1355: A scheduled red flag as the FIA conduct their own checks means we have just one more testing session to come this afternoon before the season-opening Bahrain Grand Prix. That was arguably the most straightforward session of the lot so far with conditions perfect for driving. We do have a new fastest time of testing though courtesy of Sergio Perez and the pace will no doubt quicken later on. Join us again in an hour for more testing action.

1340: A brief lull in the track action but Norris is throwing his MCL35M around at the moment on the C3 tyres. He doesn’t complete his lap though and dives back into the pits.

1310: The best part of this morning has been listening to everyone’s memories of the late, great Murray Walker. There was a minute’s silence for him before the session and a lot of black armbands on show. There is also this lovely tribute on the main straight. There will never be another commentator like him.

A lovely touch on the final day of #F1Testing with a tribute on the main straight in honour of the legendary Murray Walker ❤️ #F1 pic.twitter.com/5d0cqLyVcn

1255: As we approach the final hour of this session, wonder if we will get some qualifying simulation runs…come on everyone, you know you want to.

1243: We have a new leader! It’s Sergio Perez with a 1:30.309 on the C3 tyres which is less than a tenth off the fastest time of testing so far. Bottas was on the softest C5 compound when setting that time on Saturday…

1239: Kimi Raikkonen is the fourth driver to hit the 50-lap mark in this morning session after Bottas, Russell and Stroll. A reminder this is just a hobby for him.

1233: Fun little moment between Perez and Raikkonen as the two battle for track space heading towards the start/finish straight. Perez gets a lovely little tow down to Turn 1 and the engine cover has stayed intact this time, unlike yesterday!

1220: Those squeaky clean white rims though…

just rolled out of the shop vibes 🔥 👌 pic.twitter.com/hLeyrOnYed

1213: The AlphaTauri has been earning a lot of praise from the eagle-eyed onlookers in the paddock throughout testing and a quickest first sector from Gasly catches our attention. He can’t keep the momentum though and his time is only good enough for P4, 0.342 seconds behind on the C4 soft tyre.

1210: Norris has also shot up the timesheet to P3 and two tenths off the pace. We’re hotting up…

1200: Just as we type that, here comes Perez back out on track! He’s got the C3 mediums on and straight away goes quickest through the middle sector to close to within 0.057 seconds of Leclerc’s best.

1158: Perez has been stuck on 25 laps for a little while and that’s because there is a leak at the front of the RB16B. He’s giving the car over to Max Verstappen this afternoon so this is eating up precious track time for the Mexican.

1150: Russell causes another brief moment of panic with his Mercedes engine not sounding particular healthy. However, fear not, he was just doing some constant speed runs at various intervals to collect more valuable data for his Williams team.

1136: Russell has the first notable off of the day as his FW43B snaps away from him and he takes it very, very slowly for the rest of the lap. A suggestion that something may have broke but he’s back on the throttle again now for another push lap.

1128: Perez goes fastest of anyone through the final sector to post a 1:30.927 on the hard tyre. That takes the Mexican up to second and four tenths off the pace.

1112: An interesting observation from Karun Chandhok who is watching on trackside from Turn 13. “This is the first time the Mercedes has looked like a Mercedes,” he said. Gulp.

1100: We’re getting quite a lot of one-lap runs at the moment with plenty of tyre preparation laps on show. Still running on the harder compounds at the moment but you suspect it won’t be too long before we’re talking about the new fastest times of testing.

1054: Pierre Gasly closes to within a second of Leclerc. 0.747 seconds to be precise on a run with the prototype tyres strapped on.

1040: George Russell has had to be very patient for his turn in the car after watching on from the sidelines at Williams over the last couple of days. He’s got 14 laps under his belt already though which is the most of anyone so far today.

1036: Bottas goes up to P2 but is a couple of seconds off the early marker Leclerc has thrown down. The Finn was on the C2 tyre and on a lap which you couldn’t really call flat out.

1005: Leclerc puts down an early 1:32.959 on the mediums which is pretty quick for this very early stage of the morning session. Only a couple of seconds off the outright fastest time so far, usually at this time we’re about five or six seconds off the pace.

1002: And all 10 cars are straight out on track. No extended coffee breaks this morning.

0955: Track conditions are pretty close to perfect as the teams put the finishing touches to their 2021 season preparations. It’s warm, there’s not a cloud in the sky and the wind has died down significantly compared to Friday and Saturday.

0940: Day Two saw a Mercedes recovery take place with Valtteri Bottas going fastest and, more importantly at this stage, the lap tally increasing significantly following Friday’s slow start. Not everyone, though, is convinced about Mercedes…

0930: Good morning (or afternoon/evening depending on where you are reading from) and welcome back to the final day of pre-season testing in Bahrain. How time flies! Live track updates are on the way to you from 1000 local time.