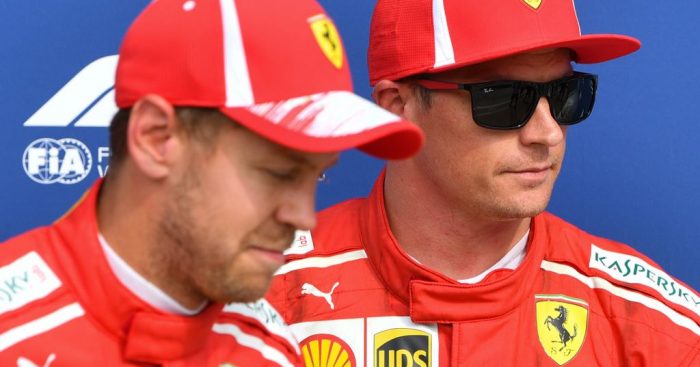 As journalists look for an explanation for Ferrari’s slump, Maurizio Arrivabene says it is “disrespectful” to blame Kimi Raikkonen’s axing at the Italian GP.

Ferrari informed Raikkonen at Monza that his services would no longer be required next season.

What happened next was pole sitter Raikkonen refused to give way for Sebastian Vettel on the opening lap, allowing Lewis Hamilton to get a run at his title rival.

Vettel tagged the Mercedes driver as he tried to hold onto second place and spun, falling to the back of the field.

Hamilton won the race, Raikkonen was second and Vettel recovered to fourth.

The Italian GP marked the start of a four-race winning streak for Hamilton, who now stands on the cusp of wrapping up his fifth Drivers’ title.

This has led to speculation that Ferrari are paying the price for informing Raikkonen of his axing.

Arrivabene says that is “disrespectful” to the driver.

“Both Kimi and Sebastian are two great professionals with years of experience on their shoulders,” he told Autosport.

“They are not two kart drivers who have just started hanging out at the track.

“What has been said about the timing of this situation are assessments which I find disrespectful against drivers who are great professionals.

“Then, let me say, if every time that Kimi receives news of this nature he responds with a pole position, then it would be worth doing it every weekend.”

Pressed on Ferrari’s decision to break the news to Raikkonen at their home race, Monza, Arrivabene explained: “I think it is important to clarify two things. Kimi has always gone well at Spa and Monza, and so Kimi was anxious to get from us an answer about his future.

“I think that communicating a decision like that is more appropriate on the eve of a race weekend on a ‘friendly’ track, rather than at a weekend that promises to be more fraught.

“Ideally it would have been better to communicate during the summer break, but we were not yet ready to do so. And after Monza meant it would still be on the eve of the Singapore weekend.”