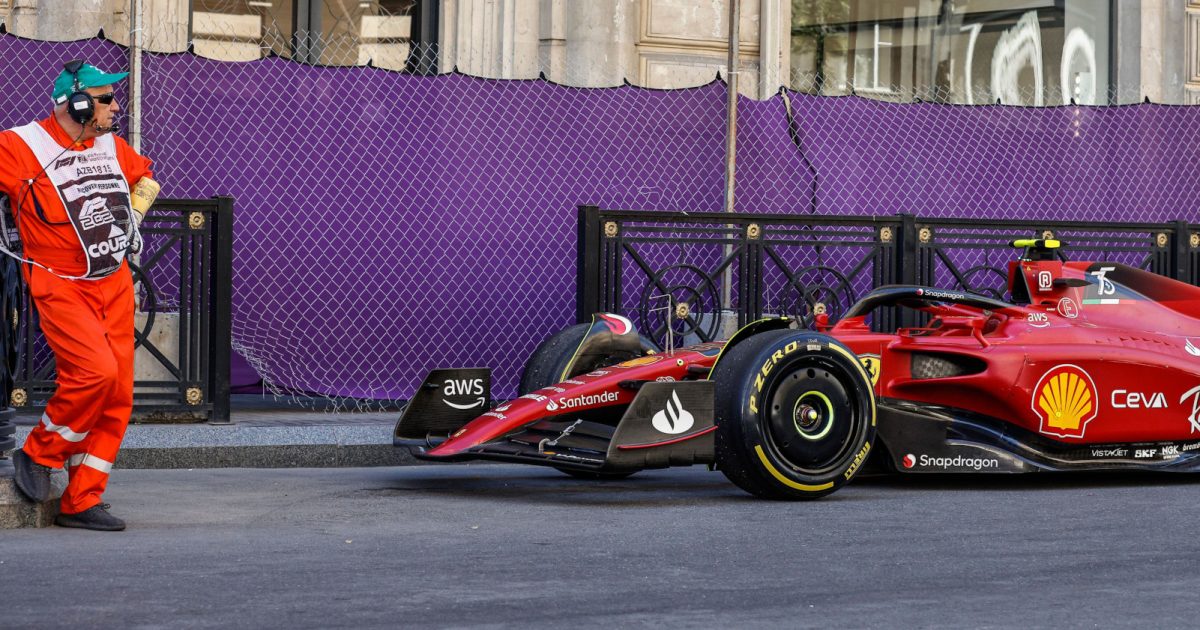 Ferrari have put in place a “short-term fix” for the hydraulic issue that put Carlos Sainz out of the Azerbaijan Grand Prix.

Ferrari suffered a double DNF at the Baku street race with Sainz out on lap nine, Ferrari revealing the cause was a hydraulic issue, and Charles Leclerc retiring on lap 20 when his engine blew.

The Monégasque driver was up in P1 at the time, his second retirement of this season while leading a grand prix.

Ferrari’s troubles were compounded as their customers, Haas and Alfa Romeo, also lost a car from the race. Kevin Magnussen’s failure was said to be the turbo-charger and the MGU-H, although Ferrari say Zhou Guanyu’s DNF was not related to their parts.

While Ferrari are still looking into the cause of Leclerc’s engine failure, they have revealed there is a “short-term fix” in place for Sainz’s hydraulic problem.

“A challenging weekend for the team, but one that we’ll look to learn and build from,” Ferrari said on Twitter.

The last time Ferrari suffered a double mechanical DNF in #F1, neither Charles Leclerc nor Max Verstappen had been born yet! 🤯

Do you think Ferrari will bounce back from their Baku blow? 💬#AzerbaijanGP #MotorsportStats #CL16 #CS55 pic.twitter.com/8yuScDdr2g

“Charles’ engine arrives at the factory tomorrow, an initial assessment should be completed by the evening.

“Hydraulic components from Carlos’ car have already been examined. A short-term fix is in place for Canada, while work is on-going on mid/long-term solutions.”

The Scuderia’s double DNF meant they again lost ground to Red Bull in the championship races.

While Leclerc has fallen to third in the Drivers’ standings, 34 points behind Max Verstappen, Ferrari trail Red Bull by 80 points in the Constructors’.

It was a big turnaround for the team that after Australia was 34 points up in the Drivers’ and 39 ahead in the teams’ standings.

“We continue to be fully motivated,” Ferrari added. “Our ambitions are still high, our aim hasn’t changed. Those moments shape us, as individuals and as a group.”

The Canadian GP, round nine of the championship, takes place this weekend with first practice at 6pm GMT.