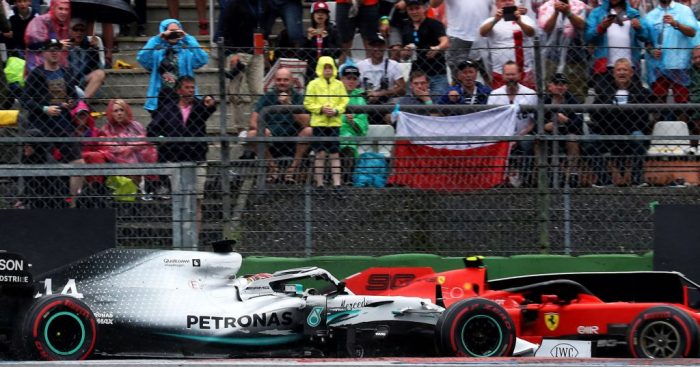 A host of drivers including Lewis Hamilton, Nico Hulkenberg and Charles Leclerc all had offs at that part of the circuit, with the latter two seeing their race come to an end after sliding across the slippery surface and into the barriers.

Leclerc described it as “unacceptable”; “insanse” was Hulkenberg’s choice of word, but Masi won’t be taking any action.

“The drag strip looks fine,” Masi is quoted by GPFans.

“We inspected it the other day and had a look again post race with the water on it. It is fine.

“Even Sebastian [Vettel] is quoted as saying that it is normally one of the grippiest parts of the track and it is no different to any of the other painted run-off, to be quite honest.

“I think it was one of those ones where if put water on painted run-off then, as much as you can do anything to make sure it is anti slip paint, it is still more slippery than unpainted tarmac.”

Masi compared it to a section of the Red Bull Ring where drivers haven’t had such issues, believing both are examples of pieces of track that punish driver error.

“They may claim it is too dangerous but from our end, using the Austrian example, the drivers were all quite pleased with it, even with the bumps and that,” Masi explained.

“It punishes them for making mistakes and it was a similar way here. We saw the other implementation we had to do regarding Turn 1 with the track limits side.

“You are balancing it to a degree, but credit where it is due, all 20 drivers have been very consistent in their views that if they run off track there should be a consequences from doing it.

“Maybe straight after a race they may have a different view about the way it has affected them, but sitting down individually with them and as a group that has been consistent in their view and that hasn’t changed.”