Home News FP1: No surprises as Mercedes claims the 1-2 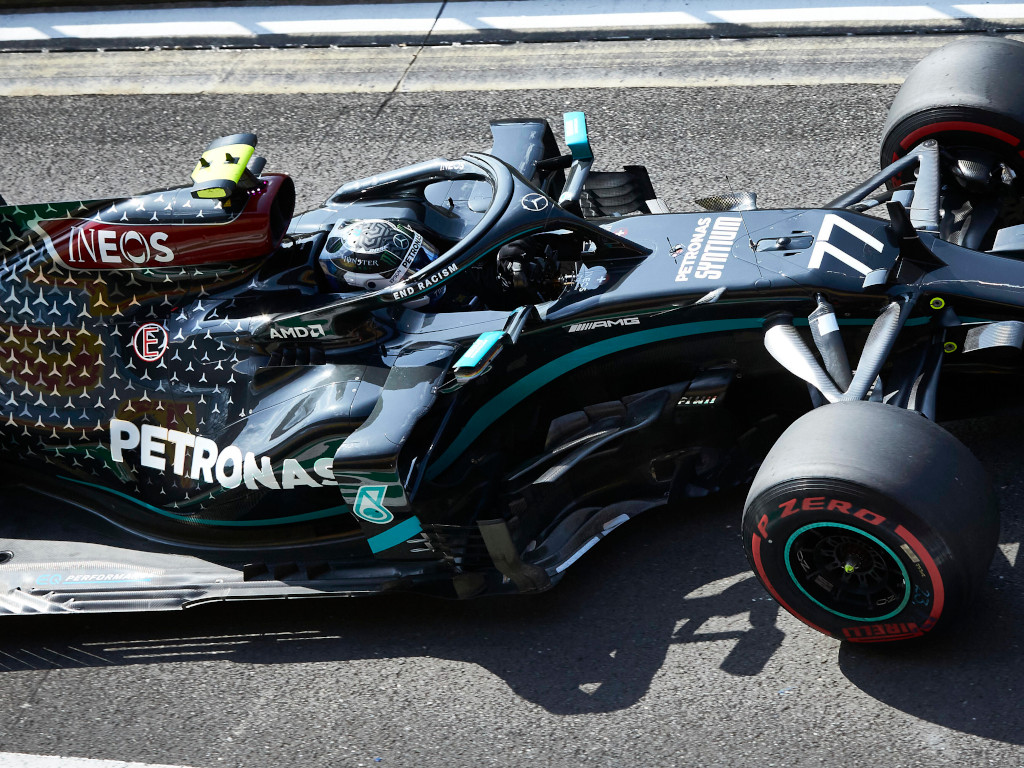 Mercedes picked up where they left off at Silverstone on Friday, but without the tyre failures, once again the team to beat.

Formula 1 returned to the Silverstone circuit for the start of the British GP part two, otherwise called the 70th Anniversary Grand Prix.

Nico Hulkenberg was back in the Racing Point RP20, once again filling in for Sergio Perez after the Mexican driver recorded a second positive Covid-19 test.

That, though, wasn’t the big news in the build up to FP1 with the FIA ruling on Renault’s Racing Point protests.

In a nutshell, the front brake ducts are legit, the rears are not. The team has lost 15 points and been fined 400,000 Euros.

But while Racing Point and Renault, both of whom could yet appeal, read through the FIA’s 14-page PDF, the pit lane light went from red to green for the start of FP1.

Kimi Raikkonen had a bit of early excitement as the Alfa Romeo driver ran wide at the Loop, using the full run-off area to the outside of Aintree.

After last Sunday’s tyre failures the drivers were quickly out onto the track on the soft tyres, which this weekend are a step softer than the ones run at the British GP, laying down laps not so much for lap time but to check the durability.

One of those was Sebastian Vettel, who last Friday only completed two laps in FP1 due to an intercooler problem. He was P2 in the early running with Charles Leclerc quickest with a 1:27.544.

And then Mercedes ventured out.

Lewis Hamilton, who took pole position and the win last weekend, and Valtteri Bottas immediately went 1-2 with Hamilton quickest on a 1:26.8. Bottas was half a second down.

Valtteri Bottas in the Mercedes was flat out through Maggots and Becketts, before only *barely* lifting off for the exit of the corner… and we're only half an hour into FP1.

This Mercedes is insane. #F170 pic.twitter.com/hT6ibMQJjV

10 laps into his run and Pierre Gasly reported that the “front left is already a bit damaged”. He headed back to the pits along with the rest of the field at the 40-minute mark, the time that the drivers have to return their first set of tyres to Pirelli.

Despite covering 10 laps, Max Verstappen had yet to set a time at that point.

Back out on track on a fresh set of soft tyres, Bottas went purple, purple and purple on his way to a 1:26.1. Hamilton responded with a purple middle sector and a 1:26.3 as he had a bit of understeer through the penultimate corner.

The FIA was once again clamping down on track limits with Raikkonen and Kevin Magnussen having their lap times deleted for running wide at Copse.

Adding insult to injury, Magnussen reported after his lap that he had “quite a big flat spot from locking up into the Club chicane.

Hulkenberg shot up the timesheet to third place, 0.7s down on Bottas’ best while on the hour mark Verstappen finally clocked his first lap time of the session, a 1:26.9 to take third off Hulkenberg.

Slowing down after his lap, Verstappen and a close encounter with Leclerc. He told Red BUll: “Can you tell me when you see another car, I didn’t see that Ferrari.”

Leclerc in fifth place was the only other driver to get within a second of Bottas’ P1 time, 0.9s down.

Several drivers, including Gasly and Carlos Sainz, complained about their “rear left” tyres being destroyed by the end of the session.

Alfa Romeo had test driver Robert Kubica in the car on Friday as the team tries to resolve its on-going issues with the C38. He finished in 19th place, one position behind Raikkonen. Magnussen was slowest of all.