Home News FP1: Bottas bounces back with a P1 at Portimao 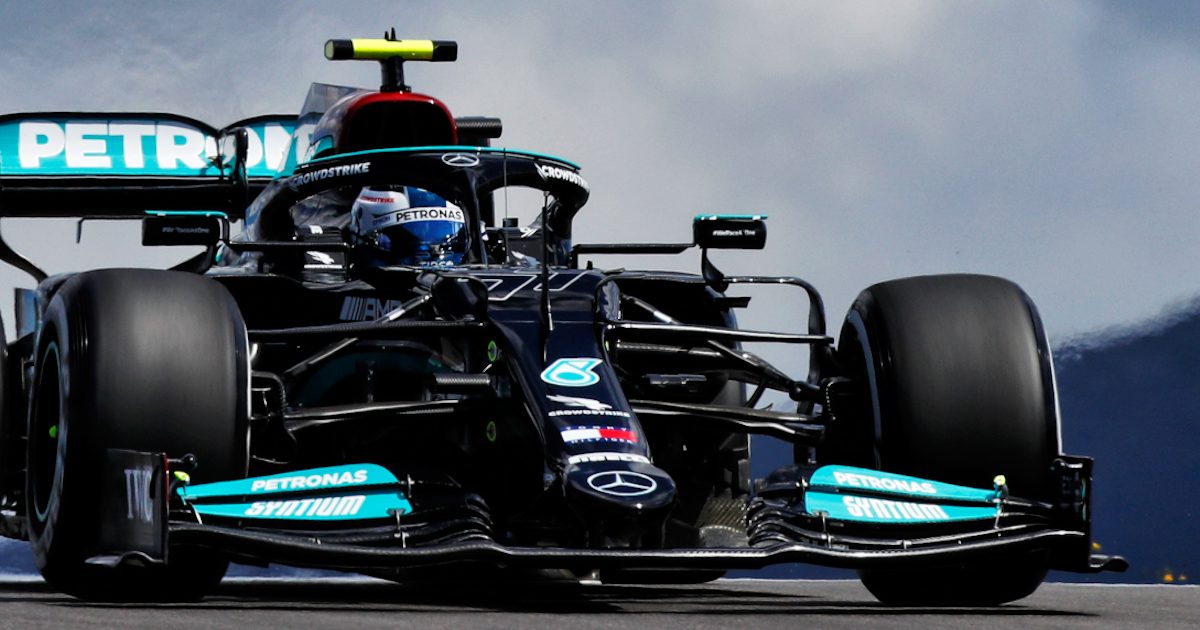 Mercedes took on Max Verstappen for the top spot in the opening practice hour at the Algarve circuit, with Valtteri Bottas coming out on top as Verstappen fell foul to bad vibrations.

Bottas and Sergio Perez, two drivers needing a strong weekend after their Imola troubles, dropped down onto the track to start FP1 and the Portuguese Grand Prix. A 1:23.778 from Bottas also got the timesheet rolling.

Carlos Sainz left a piece of Ferrari gear behind as he exited the pit lane, with the rest of the field having to take avoiding action before marshals picked it up. Esteban Ocon did one installation lap before pitting for a new front wing, Alpine running tests.

A marshal has dashed out and removed the debris now 👍#PortugueseGP 🇵🇹 #F1 pic.twitter.com/0IVJY0fW3B

Sainz and his team-mate Charles Leclerc were the first victims of Turn 4’s track limits, the Ferrari team-mates losing lap times for running wide. Bottas had no such problems, lowering the benchmark to a 1:21.829, half a second up on the Ferraris. His team-mate Lewis Hamilton, P4, reported that the “balance is pretty undriveable right now” as he returned to the pits.

Verstappen was late to the game, only leaving the pits as the Mercedes drivers returned after their first stint of eight laps. The Red Bull driver went third quickest on his first flying lap and the fastest a few minutes later with a 1:21.053. Bottas dropped to second, 0.3s down, with Daniel Ricciardo P3.

Returning to the track for a second run, Bottas went quickest again with a 1:20.506 with Hamilton up to third while Sebastian Vettel decided to pay McLaren a visit, pulling into the third set of pit boxes as that was where his former team, Ferrari, were located last season.

The tussle for P1 continued with Verstappen shaving 0.006s off Bottas’ best and then going even faster – and he was still on the hard tyres. Bottas slapped on a set of soft tyres, went purple on purple, and clocked a 1:19.648. Such was the advantage on the soft tyres that George Russell in the Williams jumped up to fourth place ahead of Hamilton.

Verstappen’s swap to the soft tyres saw the Red Bull driver let his team know that “300m” into his flying lap he had a bad vibration. “I can’t even see where I’m going,” he said before going purple in the first and second sectors and closing the gap to Bottas to 0.025s. “Impossible to drive” was his next comment. Perez put in a late lap to finish P3 ahead of Hamilton, Leclerc and Gasly.

Russell was seventh ahead of Sainz, Lando Norris and Esteban Ocon. As for test driver Callum Ilott, he was P17, four tenths down on Kimi Raikkonen.

Nikita Mazepin wasn’t happy with his Haas team-mate Mick Schumacher, or his own engineer, as the German stormed past him with Mazepin asking “what the hell is his doing?”. He was told Schumacher was on a “double push” to which he made it clear that in future he should be given this information. Schumacher was P18 ahead of Nicholas Latifi and Mazepin.