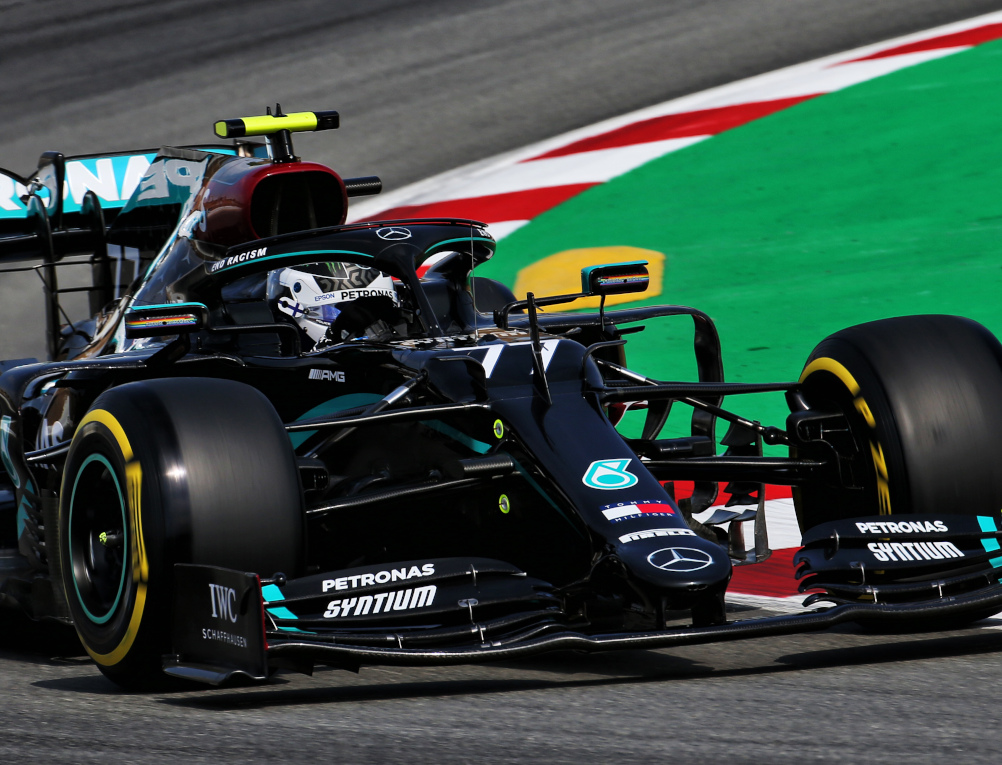 On a weekend where many thought the track temperature could potentially put Mercedes on the back foot, it was instead an all too close encounter with a bird that created the biggest drama for Mercedes.

Late in the session Bottas hit a bird at Turn 9, resulting in feathers everywhere.

Seb's not gonna be pleased pic.twitter.com/RSwCVGpNu8

Arriving at the Barcelona circuit, a track that all the drivers know extremely well as this is F1’s favoured test venue, the drivers were at least greeted with something a bit different: track temperature of 37’C.

Instead of the low to mid teens often experienced during February’s testing, this weekend’s Spanish Grand Prix is going to be on the hotter side of very hot.

Charles Leclerc was the first to set a time, leaving the Ferrari garage with what looked like a bumper on the rear of his SF1000 such was the size of the aero rake.

With the Ferraris back in the pits, Max Verstappen went quickest and then Bottas took P1 off him with a 1:18.573.

Carlos Sainz was third ahead of Daniel Ricciardo and the returning Sergio Perez.

“Just for reference, under my butt, it’s quite warm,” the Canadian said oh so politely.

As Hamilton slowly worked his way up the timesheets, on a different programme to Bottas, Ricciardo improved to second but was still some six-tenths down on Bottas. Hamilton took second off him before hitting the front with a 1:18.5.

While that was going on Verstappen had an argument with his engineer argue about some numbers on his dashboard. He popped up to P4, slotting in behind the black Mercedes and one pink one in Perez’s RP20.

Nissany was P19, slowest of all the drivers who had set a time at the 40-minute mark. Daniil Kvyat had yet to make his mark on the timesheet with just two laps on the board.

Back out on new tyres, Haas showed signs of pace as Romain Grosjean jumped up to third with Kevin Magnussen fourth. Haas, though, was one of the first to put in a run on brand new soft tyres.

Mercedes was the next to show their hand with Bottas hitting the front with 1:16.785, Hamilton – “vibration on these front tyres” – crossing the line 0.039s down on his team-mate.

#DidYouKnow the fastest corners at the @Circuitcat_eng are all right-handers and the slowest corners are left-handers! 👀

That means different car set-ups are used on the right and left-hand sides of the car 🤯#SpanishGP pic.twitter.com/9ql75C2jsX

Some 13 laps into his soft tyre run, Hamilton reported that the “left front is opening up a little bit” with a line of wear evident in the close ups.

As many expected, Verstappen was the nearest challenger to the Mercedes drivers, his 1:17.7 putting him 0.939s slower than Bottas.

His team-mate, Alexander Albon, didn’t have as much good fortune told to “slow the car” as Red Bull had spotted a “problem” in the telemetry. He returned to the pits down in 17th place but ventured out for a late run that elevated him to P8.

Ferrari moved towards the front as Leclerc jumped up to fourth place with Vettel P5. The duo, though, were both a full second slower than the Mercedes drivers.

Vettel, however, was only 0.01s down on his team-mate as he ran a brand new chassis in FP1.

Nissany had a moment of excitement in an otherwise rather boring session as he spun the Williams at Turn 10. Although he finished FP1 slowest of all, Nissany on his F1 debut was only three-tenths down on Latifi.