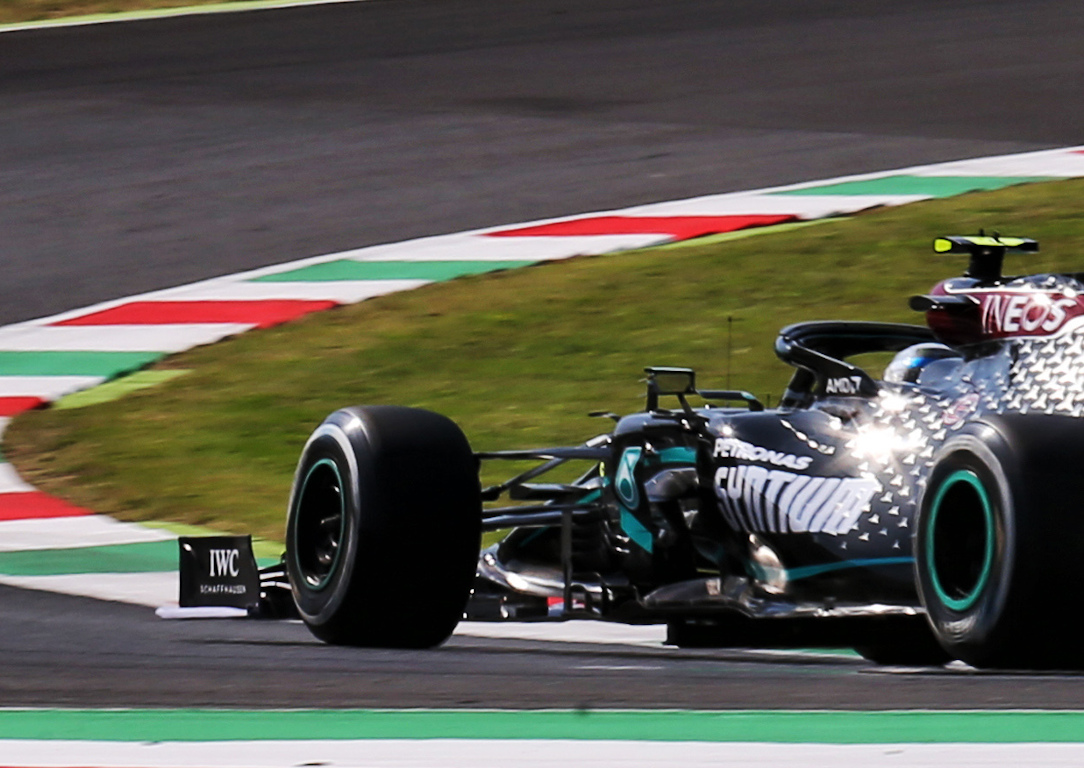 Valtteri Bottas will go down in the history books as the first driver to top a F1 practice session at Mugello while Ferrari surprised in third place.

Formula 1 had a day of firsts at the Mugello circuit on Friday as not only was it the sport’s first grand prix at the Ferrari owned circuit but there were even a few fans in the grandstands.

One thing that wasn’t new was Lando Norris singing on the radio. Asked to do a radio check on his installation lap, he responded…

The highlight of FP1 and quite possibly the whole weekend.#TuscanGP 🇮🇹 #F1pic.twitter.com/tpvz2YdgLo

Bottas put in the first timed lap at the Mugello circuit, a 1:22.1 on the hard tyres. He did, however, back off in the final sector before laying down a 1:20.5.

Italian GP race winner Pierre Gasly added his name to the board with a 1:20.9, the duo followed by Kimi Raikkonen and Alex Albon. Gasly hit the front with a 1:19.8 as one by one the rest of the field left the pits to begin their weekend’s work.

Charles Leclerc and Sebastian Vettel, in a special burgandy livery to celebrate Ferrari’s 1000th grand prix, popped up into fifth and 10th respectively on their first hot laps.

Max Verstappen put his Red Bull up into second place ahead of Lewis Hamilton, Leclerc, Carlos Sainz, all three on the mediums, and Bottas. After his hot lap Hamilton did an extremely slow cool down lap but continued on his way, clearly no issue with his W11.

Sainz meanwhile was running a new nose on his McLaren, influenced by Mercedes’ design, it was narrower than the one on Norris’ car.

Verstappen put in a 1:19.0 to lead the way at the 40-minute mark, 0.05s ahead of Hamilton with Leclerc a further four-tenths down. All 20 drivers had set times with Lance Stroll the last to do so having sat in the pits while Racing Point bled his brakes.

Raikkonen broke the silence as Ferrari’s most recent World Champion, the 2007 winner, exited the pits in his Alfa Romeo. He climbed to third on the soft tyres with a 1:19.2, making that fourth as Norris put his McLaren up into first place with a 1:18.9.

With more soft tyre runs coming in Daniel Ricciardo jumped up to fourth ahead of Raikkonen, Romain Grosjean and Antonio Giovinazzi.

Esteban Ocon was the next into the 1:18s with a 1:18.5 but it was Mercedes who, as predicted before the weekend, claimed the final P1.

Grosjean and Perez had a near encountered with the Haas driver on a hot lap when the Racing Point driver, who had come out of the pits, got in his way.

📻 "They don't have radio at Racing Point?" – Grosjean

Adding to his trouble Grosjean told Haas that he had “absolutely no power” through Turns 2 and 3 and 4 and 5.

As for the second Ferrari, Vettel was P13 and a full second slower than Leclerc.

There was a yellow flag late in the session when Nicholas Latifi spun his Williams. He was P20 on the day.