Home News FP2: Ferrari up the pace; Hamilton crashes out 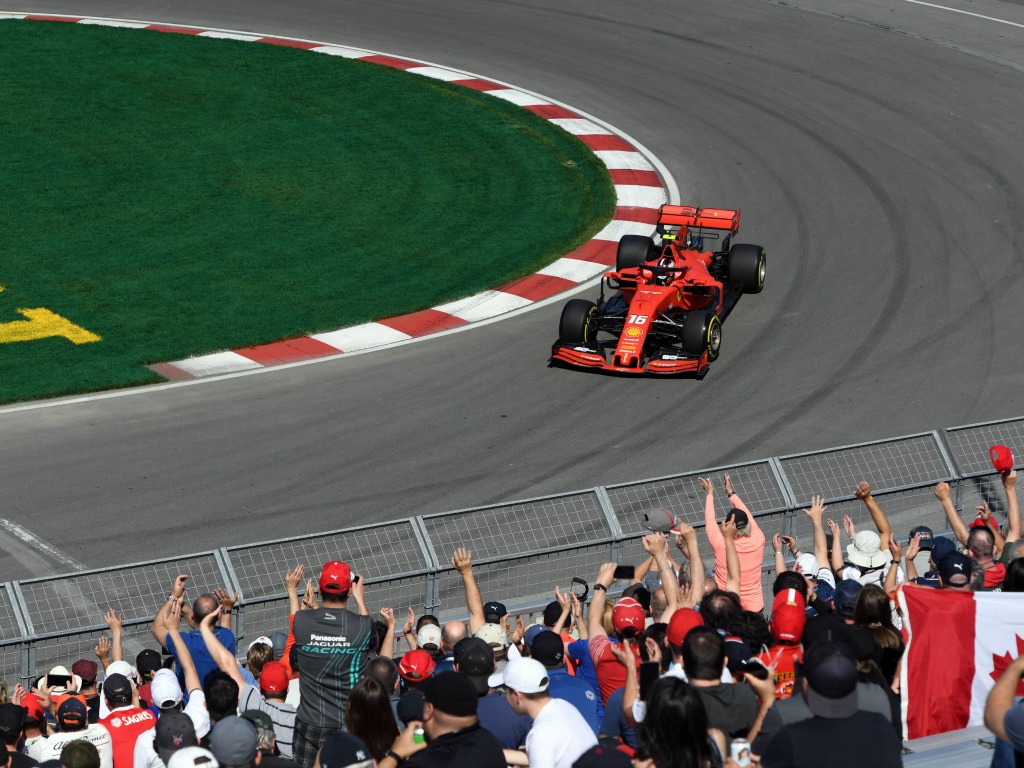 Ferrari have teased a potential closer battle in Canada as Charles Leclerc led a Scuderia 1-2 in FP2, while Lewis Hamilton crashed out in Montreal.

It was all looking rather rosy for the Silver Arrows until Hamilton lost control through Turns 8-9 and banged the right rear of his W10 into the unforgiving walls.

A puncture and rear damage was the result and, while he was able to drive the car very cautiously back to the pits, he completed just eight laps on Friday afternoon at the Circuit Gilles Villeneuve.

Mercedes changed the entire rear of the car as a precaution, including gearbox, but thankfully for him it wasn’t his race gearbox that was in use.

With Hamilton on the sidelines, Ferrari upped the ante with Leclerc posting a 1:12.177  on the soft tyres, 0.074 seconds quicker than Sebastian Vettel. Valtteri Bottas was a tenth behind in P3.

Carlos Sainz and Kevin Magnussen were able to gatecrash the top five due to Hamilton’s early exit and Max Verstappen’s disrupted session due to Pierre Gasly getting in his way on a hot lap. He was fortunate to only lightly brush the ‘Wall of Champions’.

UPDATE: After his hit with the wall, we’re changing the whole rear-end of Lewis’ car as a precaution 🛠#CanadianGP #F1 pic.twitter.com/xrYSawNTvw

Track temperatures were up 20 degrees on the morning session, whilst a strong breeze also greeted the drivers as the track went green once again. It was back to our regular schedule with Robert Kubica replacing F2 leader and reserve driver Nicholas Latifi at Williams.

Mercedes were out of the blocks early and quickly established dominance at the top of the timesheet; Hamilton pumped in a 1:12.938 on his opening flying lap with the mediums strapped on and Bottas, on the hard compound to begin with, was just 0.284 seconds adrift.

But, it was not all plain sailing for Hamilton. On his next push lap, he lost the rear of his W10 through Turns 8-9 and whacked the wall, causing his right rear tyre to puncture. His only saving grace was that was able to nurse the car back to the pits.

“Sorry about that,” he said meekly on team radio.

Back on track, attentions turned to the qualifying simulation runs where Vettel spiced things up a little by going 0.060 seconds quicker than Bottas after both switched to the quickest compounds (the softs).

Vettel banked a 1:12.251 with Leclerc just a tenth behind the new benchmark in P3. Hamilton forced to watch on from the sidelines.

Leclerc managed to dislodge Vettel on his next attempt by going 0.074 seconds quicker.

There was then a mix-up at Red Bull as Gasly hampered Verstappen’s flying lap. The quick reflexes of the Dutchman ensured it was only a quick peck with the ‘Wall of Champions’ rather than a full-on kiss.

The Wall of Champions is calling…

And Max *almost* answers it, with a solid skim halfway through FP2 😬#CanadianGP 🇨🇦 #F1 pic.twitter.com/nCrV2XQHD8

With Hamilton and Verstappen out of the one-lap pace picture, a rather unfamiliar top five emerged with 30 minutes left on the session clock: Leclerc, Vettel, Bottas, Sainz and Magnussen.

The race simulation runs were littered with complaints from the likes of Vettel, Leclerc, Hulkenberg, Romain Grosjean and Kevin Magnussen were all moaning about the rear tyres overheating.

Lance Stroll and Romain Grosjean almost collided with each other near the pit lane entry, while Kubica and Alexander Albon  got a little bit too close for comfort in the garages.

While Ferrari will grab the headlines with the one-lap pace, Mercedes will no doubt come to the fore with their impressive runs on the hard compound tyre.

All fastest times set on softs unless stated