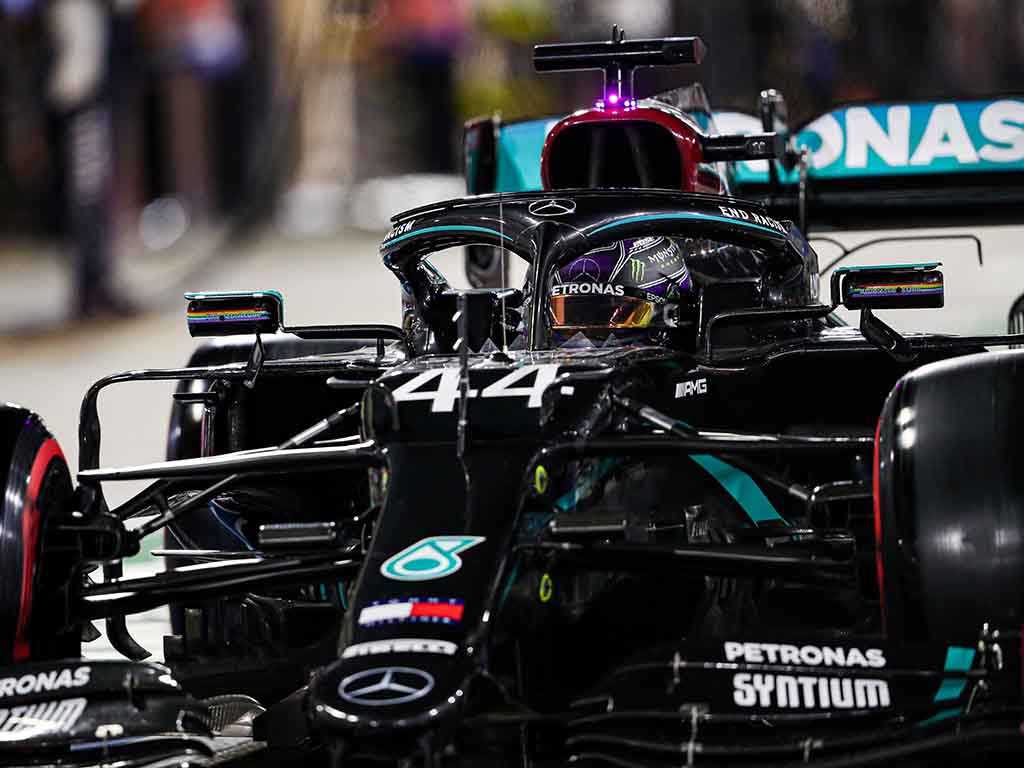 Lewis Hamilton topped a ruff FP2 as the session was delayed by not one, but two red flags in Bahrain.

The session was compromised firstly by a big shunt for Alex Albon at the final corner and then a loose dog made its way onto the track soon after.

Whilst they were a surprise visitor, there were certainly no shocks at the top of the leaderboard as Hamilton dislodged Verstappen from P1 late into the out-of-sync session.

Hamilton posted a 1:28.971 on his second qualifying sim run to shave three tenths off Verstappen’s previous best. Valtteri Bottas rounded off the top three, whilst both Ferrari cars failed to make it inside the top 10.

Second practice takes on added importance in Bahrain as it is the only practice session which is an accurate representation of what the drivers will face on Sunday under the lights in a night race.

That means there was a flurry of activity straight from the get-go with drivers and teams eager to make full use of the conditions. We were back to a full selection of the 2020 grid after Kimi Raikkonen and George Russell made way for Robert Kubica and Roy Nissany respectively in opening practice.

But, before the drivers got fully stuck into the programme for this weekend’s race, they had to stick the Pirelli prototypes on again for a minimum of six timed laps.

Bottas and Hamilton were notable strugglers on the prototypes with the latter pretty much drifting around the circuit, much to Verstappen’s amusement as he followed the rear of the Mercedes car.

A brief lull in track action followed as teams prepared to get back to their regular schedule.

It didn’t take long for pace to quicken up soon after that lull as Verstappen, with fresh mediums strapped on, lowered the benchmark with a 1:29.318 which was two tenths quicker than Perez in P2 on the same compound. Ricciardo, on fresh softs, slotted into P3, also two tenths down.

With 45 minutes of the session remaining, the Mercedes duo of Bottas and Hamilton were still occupying the bottom two positions on the timesheet but the former then sprung to life with some soft tyres to close the gap to Verstappen to 0.018 seconds.

The session then came to a sudden halt as Alex Albon suffered a heavy shunt at the final corner, wrecking the right side of his Red Bull car.

Albon ran wide and found no grip when trying to correct himself and was left as a mere passenger as he slammed into the wall. He reported he was “ok” before apologising to the team.

An orderly queue formed at the end of the pit lane as the session got the green light again with 31 minutes left on the clock. However, within seconds another red flag was shown as a dog was running loose on the track.

It ate up precious time with some drivers, like Hamilton, still not able to complete a qualifying sim run.

Hamilton finally found some time to complete a qualy sim run on the softs, but some traffic in the final sector ensured he only moved up to P6 from P20 on the timesheet.

He had better joy on his second attempt, though, as he shot to the top of the timesheet to make it a Friday practice double.

Thankfully for the drivers, there were no further interruptions during the race sim runs as valuable data was collected ahead of Sunday’s race.