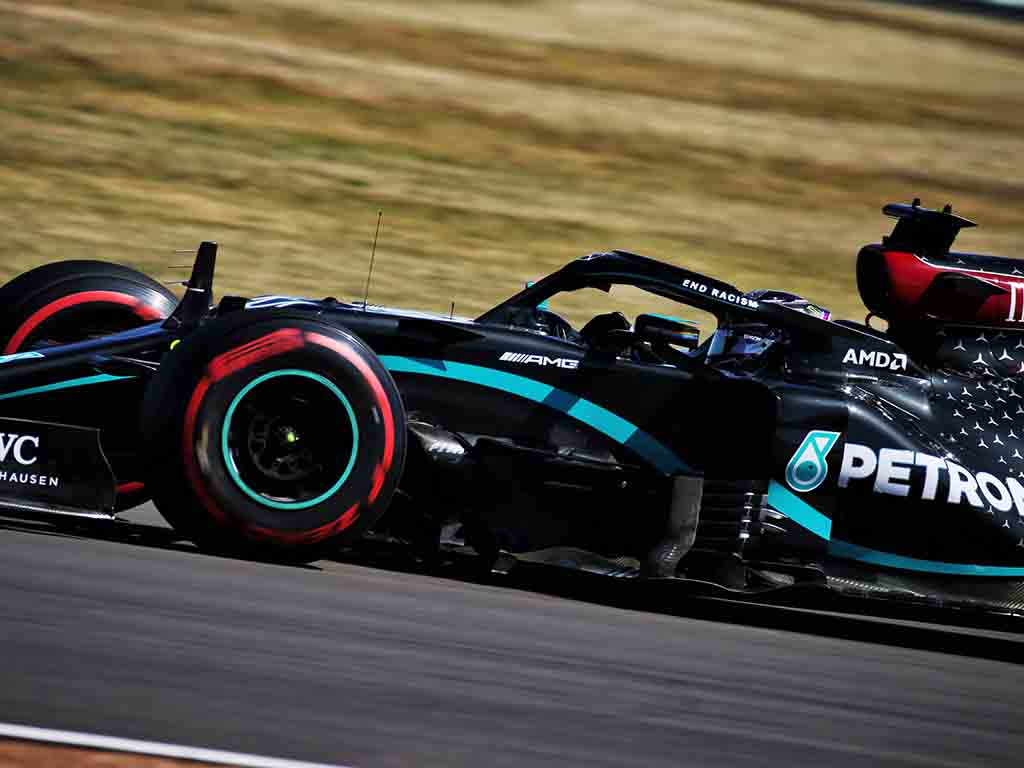 Another practice session, another Mercedes 1-2 as the Silver Arrows’ superiority shone once again in FP2 ahead of the 7oth Anniversary Grand Prix.

Valtteri Bottas topped first practice at Silverstone with Hamilton in second, but the roles were reversed as the W11 showed that it can in fact handle hotter temperatures.

Hamilton’s 1:25.606 remained unbeaten as Bottas fell a tenth short of making it a Friday P1 double. The Silver Arrows duo were well clear of the rest – Daniel Ricciardo, Max Verstappen, Lance Stroll were some eight tenths down in P3, P4 and P5 respectively.

Nico Hulkenberg finished P6 to continue his promising start to what will hopefully be an actual race start come Sunday afternoon.

Rounding off the top 10 in a second practice session were Charles Leclerc, Lando Norris, Carlos Sainz and Esteban Ocon.

Vettel, languishing down in P14, suffered more Silverstone woe as his engine failed coming out of Copse corner. The SF1000 leaked oil and subsequently red flagged the rest of the session with five minutes left.

Another Ferrari-powered car in the form of Antonio Giovinazzi’s Alfa Romeo also came to a stop at Becketts.

After winning on four and three wheels, Mercedes are now ready to do the same on just two. #F1 pic.twitter.com/Phy3JuBDEF

Whilst the philosophical conversations continued off the track about what can and cannot be copied on a Formula 1 car, the clear Mercedes dominance continued on it during a hot and humid Friday afternoon at Silverstone.

Inside the opening 30 minutes of FP2, the all-so-familiar Mercedes 1-2 was established again as Bottas initially went a full second quicker than the previous best set by Racing Point stand-in Nico Hulkenberg.

His opening effort on the medium tyres was a 1:25.917 and Hamilton, running a direct comparison on the softs, was able to go slightly quicker – but just by 0.006 seconds.

Verstappen was able to slot himself into his usual position of P3, five tenths off the pace before we headed into the final hour of second practice.

Bottas swapped the mediums for a fresh set of softs as he hurtled into a qualifying sim run and went back into top spot, but again the performance step from medium to softs was not a huge one. The Finn managed to shave just one tenth off Hamilton’s time.

Bottas’ time was there to be beaten and Hamilton duly obliged with the mediums on. He brought the benchmark down to a 1:25.606.

After the sudden tyre blow outs at the British Grand Prix, the softer compounds were naturally the main focus during the race simulation runs towards the end of the session.

Unsurprisingly, there was plenty of degradation on show up and down the Formula 1 field and provided yet more solid evidence that the 70th Anniversary Grand Prix will be at least a two-stop race.

Meanwhile, not all was funky dory at Racing Point (away from the copycat saga of course) as Hulkenberg had to abruptly end his race sim run because his seat became loose.

#Seb5 stopping on the track for an engine failure. Session red flagged due to GIO stopping as well. The session will not be restarted. #FP2 #F170 pic.twitter.com/WlSsug5YDR