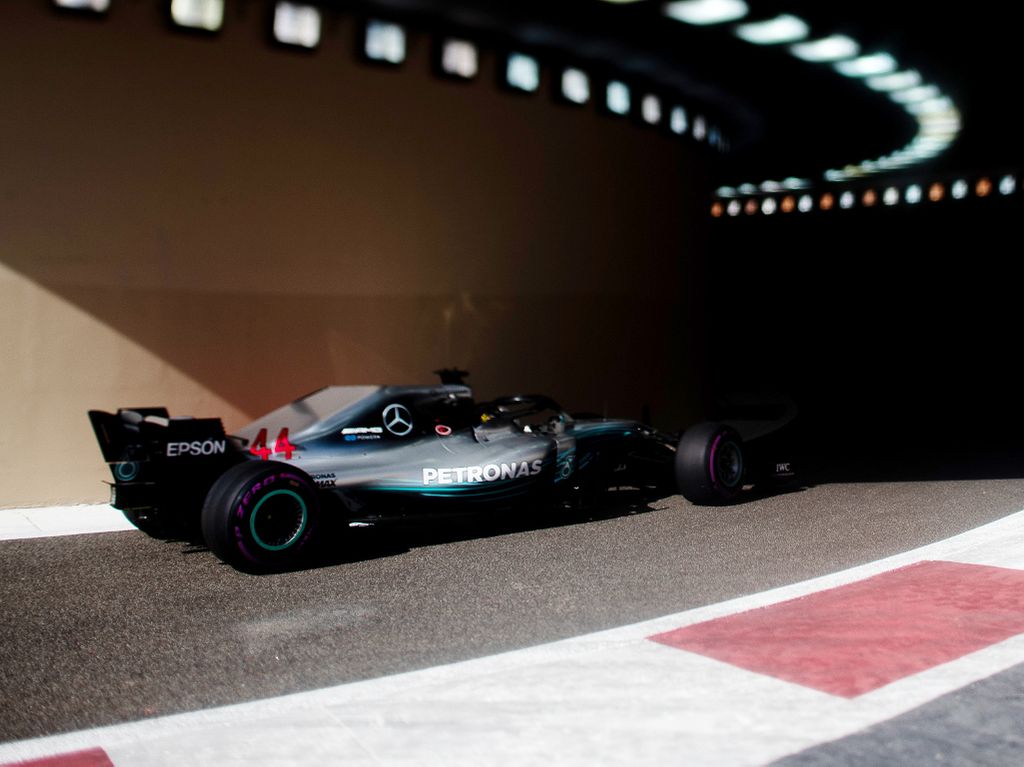 Lewis Hamilton set the pace in final practice for the Abu Dhabi GP while Daniel Ricciardo had yet another breakdown in his RB14.

Saturday’s final practice, both for the Abu Dhabi Grand Prix and the 2018 F1 season, got underway in sweltering conditions with the track temperature up to 42’C.

That may have meant that the lap times weren’t a true reflection of the pecking order but it was nonetheless the final hour to set up the cars ahead of qualifying.

Sergey Sirotkin was the first man to post a time, a 1:42.5. Unfortunately for the Williams rookie, he was also the first to meet the rebuilt Turn 20 kerb and was left asking Williams to check for damage.

Kimi Raikkonen took over at the top with 1:39.314 on the hypersoft tyres. The Finn, though, was struggling to get in a clean lap, having several offs as he pushed the limits.

His team-mate Sebastian Vettel went fastest with a 1:38.668.

Vettel’s 2019 team-mate, Charles Leclerc, had the first big drama of the session as he got it wrong at Turn 18, put dirt on his tyres and rear ended the barrier at Turn 19.

He told Sauber that his rear tyres had gone despite only being on his sixth lap of the session.

😮 @Charles_Leclerc has clonked the barriers and is trundling back to the pits with his rear wing dangling from the back of his car #AbuDhabiGP 🇦🇪 #F1 pic.twitter.com/wKtT1tgmJB

Back at the front, Vettel led the way halfway through the session with his 1:38.668 while Max Verstappen was second, 0.418s down and Lewis Hamilton was third.

The Mercedes driver added his name to the list of those running wide and skating along the Turn 20 kerb before improving to second place.

Meanwhile back at the skate park…

Vettel ventured out on a new set of the hypersoft Pirellis and went purple in the first, second and third sectors. He took a full second off his time; a 1:37.587 for the German.

Hamilton responded with a hot lap of his own and went quickest, a 1:37.176. He went ahead of Vettel, make that Raikkonen as the Finn slid up into second place. He was 0.288s off Hamilton’s pace.

Vettel finished the session in third place ahead of Max Verstappen, Valtteri Bottas and Daniel Ricciardo.

Ricciardo’s session ended five minutes earlier as he parked his RB14 between Turns 9 and 10 with a suspected water pressure issue.

Romain Grosjean was best of the rest for Haas while Nico Hulkenberg, Carlos Sainz and Esteban Ocon completed the top ten.

Ocon had a difficult final practice as he spent much of the session stuck in the Force India garage with a reported engine issue. He finally made it out with 10 minutes remaining.

Back in business! @OconEsteban rejoins the fun with 10 min to go in this session! #AbuDhabiGP pic.twitter.com/lh6VxBGLPD