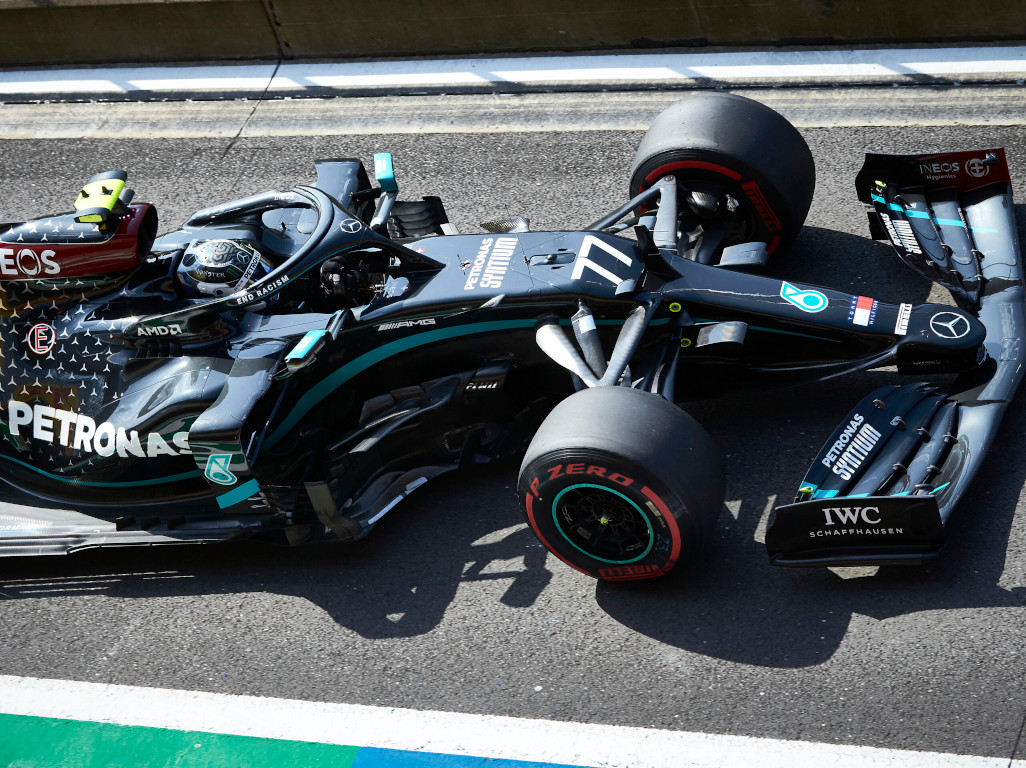 After Friday’s sweltering heat, Formula 1 arrived at the Silverstone circuit on Saturday morning to be greeted with grey clouds, blustery wind and a track temperature that was 20’C cooler than Friday.

Sebastian Vettel, who had a nightmare opening day with several different car issues, clocked the first lap of the session, a 1:29.5. He lowered that to a 1:28.8 before being pipped to P1 by Carlos Sainz.

While they were joined out on track by Charles Leclerc, Hamilton and Bottas, Alex Albon was stuck in the pits with an ES problem.

Strapped into his RB16, which he crashed heavily on Friday afternoon, the car was fired up only for Honda to report an electrical issue with the driver told to switch the engine off.

All hands on deck in the Red Bull garage at the team go to work on Alex Albon's car 🧑‍🔧#BritishGP 🇬🇧 #F1 pic.twitter.com/xPu1ZLzlT4

Hamilton went quickest with a 1:26.8, 0.3s up on Bottas while Leclerc slotted into third place ahead of Sainz.

After a cool down lap, both Mercedes drivers upped their pace with Hamilton extending his advantage, Bottas taking P1 off his team-mate and Hamilton retaking it with a 1:26.3.

Max Verstappen was third ahead of Lance Stroll and Nico Hulkenberg.

The German is filling in for Sergio Perez this weekend after the Mexican driver had to self-isolate following a positive test.

Here's a trip through Maggots-Becketts onboard with Nico Hulkenberg – on repeat it's absolutely mesmerising seeing an F1 car at full tilt through here. 😍 #BritishGP pic.twitter.com/pH6veZl9me

Switching over to qualifying sims for the final 20 minutes, Carlos Sainz put his McLaren up into fourth place ahead of Leclerc and Lando Norris.

But it wasn’t all smoothing running for everyone. Vettel had a hairy moment through Becketts while minutes later Hamilton had a similar wiggle.

Only a tiny oversteer moment in the middle of Becketts for Hamilton 😳😳😳 #BritishGP pic.twitter.com/vwR8cj8huA

Hamilton’s moment allowed Bottas to get the jump on his team-mate, going quickest with a 1:25.8 with Hamilton 0.138s down.

Vettel’s troubles continued with the Ferrari driver reporting that “something is loose again, down by the brake pedal”. He returned to the garage but wasn’t there for long before heading back out for a few final laps.

Racing Point was the last of the teams to do its qualifying sims with Stroll moving up to fourth place behind Verstappen while Hulkenberg went P9.

Albon made a late appearance, his first flying lap time deleted for ignoring track limits. His second put him P13 on the timesheet.